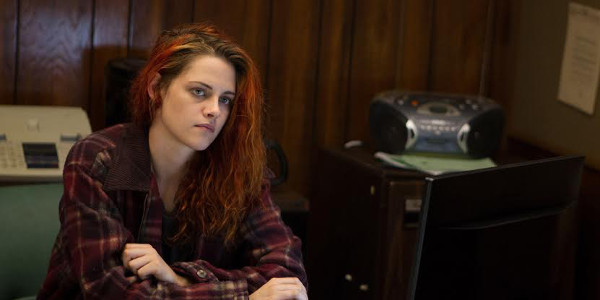 In the film, a stoner (Eisenberg) and his girlfriend’s (Stewart) sleepy, small-town existence is disrupted when his past comes back to haunt him in the form of a government operation set to wipe him out.

Stewart plays Phoebe Larson who appears to be as unmotivated as her slacker boyfriend but unlikely hero Mike. Like him, she seems in no hurry to go anywhere. But Phoebe is much more driven than she lets on. "She is way more together than he does," says director Nima Nourizadeh. "She's responsible, with more of a real job. Mike actually relies on her for a lot of the time. You soon understand that she pretty much takes care of everything for him." Stewart and Eisenberg had instant chemistry, Nourizadeh says. "They hadn't seen each other in a couple of years, but the connection was instantaneous. When we started shooting, they were completely comfortable together even in the most intimate moments. We needed that for the comedy to work. They're definitely two people I would love to work with again."

After meeting with the pair together, the filmmakers were sure they would be convincing and appealing as a couple dedicated to getting baked together. "There's something about Jesse and Kristen that is so compelling and so right," says producer David Alpert. "The idea of re-teaming them was a dream come true. She's very alluring and charismatic on screen, and she brings amazing depth to the character and the relationship. It's not just a supporting girlfriend role: she's an equal." Like Eisenberg, the actress is taking a role that is not typical for her, notes screenwriter Max Landis. "She's not the sacrificial dove or the princess who must become a warrior," he says. "Kristen's played all sorts of crazy characters, but in this she plays someone closer to who she really is, a sort of laid-back tomboy."

Stewart admits she jumped at the chance to work with Eisenberg again. "We should make a movie together every five years," she says. "It's just so comfortable to work with him. He's hilarious and intimidatingly intelligent. And this script is so original. Imagine that your stoner buddy just turned into an expert CIA assassin and the chaos that ensues. It's an ultra-violent, in-your-face action movie, as well as an emotionally grounded love story, as well as a full-on slapstick comedy. I wanted to explore that with Jesse."

Watching Mike conquer the CIA's most vicious operatives is an unexpected delight, she promises. "These two kids turn into something you would never foresee. Watching us annihilate a town or take out deadly killers is just funny, especially with Mike's off-the-wall commentary as it goes down. I haven't had this much fun making a movie in years."

For that, she gives full credit to Nourizadeh. "He is incredibly detail oriented," says Stewart. "He left no stone unturned. He's such a sensitive dude that he was truly concerned with everything, including the little sweet bits, like the matching tattoos on our feet."

'American Ultra' is pretty messy, but it’s charming in its own way. It isn’t a very good action film, but it clearly strains beyond the borders of that particular genre. It’s a little funnier, a little sweeter, and a little smarter when all is said and done.

L.A. Weekly describes it as “A bloody valentine attached to a bomb. It's violent, brash, inventive and horrific, and perhaps the most romantic film of the year.”

Oscar-nominated young actor Jesse Eisenberg, whose previous roles have included “Now You See Me,” “The Social Network,” and “Zombieland,” was the filmmakers' first choice to play the slacker-turned-superspy in the intriguing thriller “American Ultra.”