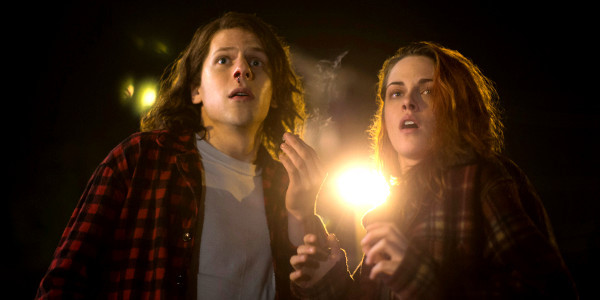 'American Ultra' is pretty messy, but it’s charming in its own way. It isn’t a very good action film, but it clearly strains beyond the borders of that particular genre. It’s a little funnier, a little sweeter, and a little smarter when all is said and done. American Ultra tells the story of Mike (Jesse Eisenberg), a burnout who only really cares about his girlfriend Phoebe (Kristen Stewart). In the opening minutes of the film, he talks about how he doesn’t really remember his life before meeting Phoebe, and how he wants to propose to her and is just looking for the right time. But what Mike doesn’t know is that he’s actually the product of a secret government project. And when elements inside the CIA decide to shut that project down, trained killers are sent after him. But before that happens, his long-forgotten skills are activated. Suddenly, Mike is a lethal force of nature, armed with vast knowledge about weaponry, and the ability to turn anything into a deadly implement.

As a logline: it’s 'The Bourne Identity' for stoners. The film doesn’t hide this. The name of the town in the film is “Liman,” an obvious to the director of the first Bourne film. The joke of having a stoner as a killing machine wears thin eventually, but 'American Ultra' becomes surprisingly affecting as it details the relationship between Mike and Phoebe. The film doesn’t really work as a story, the film too loose with the details for any of the plot to matter. But there are tender moments in the film that give it more charm than one would expect.

The whole CIA power struggle in the film doesn’t amount to much. That it ends up taking up so much time feels like a mistake. The plot as a whole lacks rigidity and structure. The film seems to use the stoner milieu as an excuse to disregard structure altogether, delivering a narrative that overly loose. The characters are running around with little purpose for the first couple of acts. They aren’t trying to find answers, even when one of the characters really ought to be trying harder to figure out what’s actually going on.

But within this mess, there are a few gems worth seeking out. The action isn’t particularly good in general, but the climactic sequence, which is mostly done is one long, digitally glued together stretch, is the film fulfilling the promise of this concept. It is an exciting, well-directed scene that overcomes the physical limitations of the star. There are little inspired bits of direction peppered throughout the movie. But the most appealing thing about this film is the surprising tenderness it shows when depicting the relationship between its primary couple.

Romance tends to be extra baggage in films like these, a perfunctory element included to appeal to a wider audience. But here, it is actually vital. It is what gives the film a semblance of heart, a grounding element in the midst of all the crazy violence that kind of defines this film. It helps that these characters start out in love, instead of one having to win the other over. There is a level of intimacy present that just isn’t seen in other action films. Jesse Eisenberg and Kristen Stewart are excellent in these roles. They make for a great couple on screen, displaying a sense of familiarity that goes a long way in selling their romance.

'American Ultra' is pretty messy, but it’s charming in its own way. It isn’t a very good action film, but it clearly strains beyond the borders of that particular genre. It’s a little funnier, a little sweeter, and a little smarter when all is said and done. The ending of this story doesn’t do anything for me, but once again the film makes up for it by putting together a visually striking sequence that more than makes up for the problem. That’s the story of 'American Ultra': every time it gets close to derailing, it delivers something unique and appealing to serve as remedy to its shortcomings.

L.A. Weekly describes it as “A bloody valentine attached to a bomb. It's violent, brash, inventive and horrific, and perhaps the most romantic film of the year.”

Oscar-nominated young actor Jesse Eisenberg, whose previous roles have included “Now You See Me,” “The Social Network,” and “Zombieland,” was the filmmakers' first choice to play the slacker-turned-superspy in the intriguing thriller “American Ultra.”