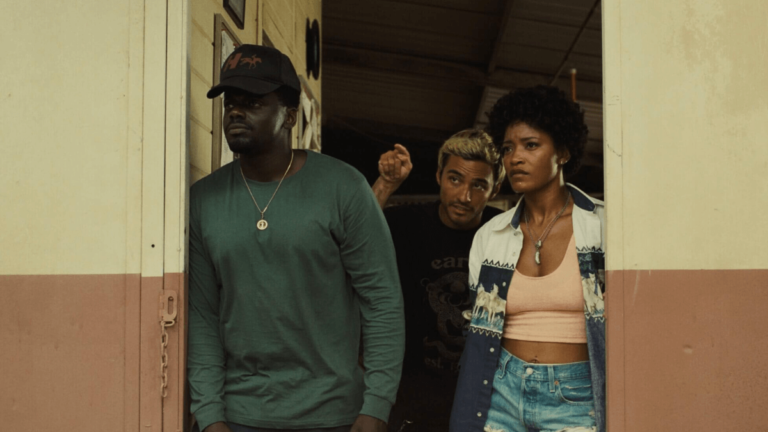 Seeing Is Believing: a review of ‘Nope’ by Jordan Peele

'Nope' is executed wonderfully, with breathtaking filmmaking that truly maximizes the medium of cinema for some striking moments of pure movie magic.

If anything, Jordan Peele’s ‘Nope’ is a love letter to the origins of cinema and how important seeing – and the gaze –  is to the experience of life. The film is a contemporary take on the science fiction creature feature. It is a dissection of modern civilization’s fascination and obsession with spectacles and the capitalist instinct to monetize these spectacles, no matter how traumatic they may be for the people involved. Conceptually, it’s not as refined as Peele’s earlier work like ‘Get Out’ or ‘Us’ but ‘Nope’ is executed wonderfully, with breathtaking filmmaking that truly maximizes the medium of cinema for some striking moments of pure movie magic.

Set primarily in a horse ranch and the neighboring Western-themed theme park, the movie follows two siblings, who are struggling to keep their ranch from going bankrupt. Otis Jr. (called OJ and played by Daniel Kaluuya) and his sister Emerald (called Em and played by Keke Palmer) are polar opposites. OJ is stoic, more at home dealing with horses than with people, while the vivacious and exuberant Em is loud and boisterous but she feels less connected to the ranch than her brother. Stalling for time, they sell their horses to Ricky “Jupe” Park (played by Steven Yeun), who runs Star Lasso ranch and is a former child star who has survived a traumatic encounter on a television show in his youth.

All of these narrative pieces come together when OJ and Em have a frightening experience one evening when one of their horses disappears in the dead night in the most frightening way and they suspect it was taken by something that is not of this planet. The pair then get the help of Angel (played by Brandon Perea), a technician at an appliance store, to set up cameras to try and capture the UFO.

What unfolds is a rather terrifying exploration of the unknown. This film works completely at its own pace and rhythm. It opens with a scene of violence, though completely hidden by furniture, and all we get are impressions of the brutality before jumping into an extended first act that establishes all the characters and sets up the lore of this movie. It’s a long exposition that sets up the emotional ties of the characters to the dangers of this extraterrestrial encounter later on and while nothing exciting is happening yet, it’s filmed with so much dread and doom just under the surface. You know something is up but you don’t know what it is exactly.

And then when the first sighting happens, the film’s second act moves into full gear and Jordan Peele gives us a full master class in setting up tension and anxiety through sound design and expert camerawork. By playing with what we can see and a proper establishing shot to understand the geography of each scene, we feel fear because we know something is up but we don’t see anything.

This is best experienced in a barn scene that midway through the film it’s really the highlight of this movie. Peele understands that oftentimes it is what we imagine that is far scarier than seeing anything that is CGI-created or even done through prosthetics.

Seeing is such an important aspect of this movie, both within the narrative and in the filmmaking. Story-wise, the need to capture evidence of this extraterrestrial horse-thief brings the whole idea of cameras, of different kinds, into the narrative. Later, we discover that the ranch is also connected and when that is uncovered and what we get is a commentary on our relationship with our cameras and the media and how we treat these spectacles in our lives. ‘Nope’ opens a discussion on how our society treats these moments captured on film and how almost instinctive it is to monetize this first before even treating them with any sense of consideration or sensitivity.

At the same time, it’s also a love letter to filmmaking, referencing the first-ever motion picture of a man, a black jockey riding a horse, and this imagery is so strong within this film. ‘Nope’ pushes back against the erasure of black people’s contributions to the origins of film by reminding us that the first ever “actor” on film was a black man. In fact, it’s quite striking that the four leads of this film are people of color.

Kaluuya and Palmer are fantastic as the energy of their characters are totally opposite of each other and while Palmer’s exuberance can fill the screen, Kaluuya manages to fill the screen with his silence. Perea is a standout as his Angel balances out OJ’s and Em’s opposing energies with his mix of panic and wonder. Yeun is absolutely oozing with charisma, creating a believable former child actor, who is hiding a history of trauma through his practiced showbiz smile.

Though the film isn’t as conceptually strong as Peele’s first two films, ‘Nope’ is such a thrilling experience in the cinema. If you can, watch it on IMAX, as the film was shot on IMAX cameras and the visuals are stunning in that format. In ‘Get Out’ and ‘Us,’ he really digs in and dwells in the concepts that he proposes in both films whereas ‘Nope’ dramatizes it but doesn’t linger there. More experiential than thought-provoking, this film is a fun ride but won’t really mess with your head as much.