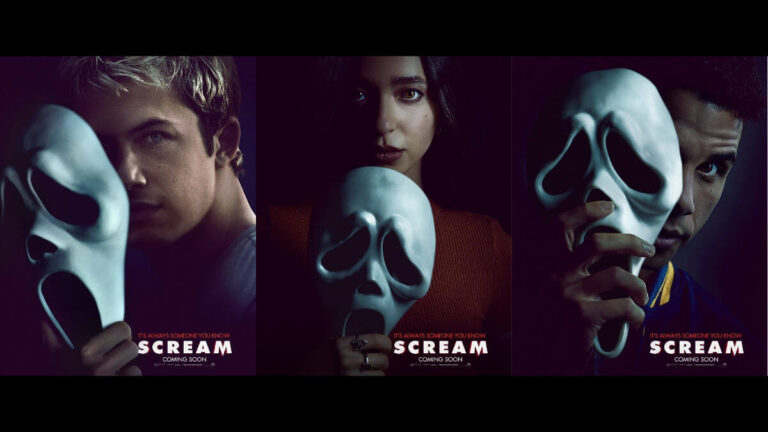 Check out the young actors who play the latest targets of the new Ghostface!

Just as the original 1996 Scream film starred a group of young actors who would go on to achieve enormous success, the makers of the 2022 Scream set out to fill their movie with an equally talented group of up-and-comers destined for stardom.

Melissa Barrera (In the Heights) plays Samantha “Sam” Carpenter, who returns to Woodsboro after a long absence when her younger sister Tara is attacked by Ghostface. Like the character she portrays, Barrera has a younger sister in real life and says she identified with Sam’s protective instinct.

Jack Quaid (The Hunger Games, The Boys) plays Sam’s devoted boyfriend Richie. Quaid describes Richie as a supportive boyfriend to Sam in her hour of need. When viewers first meet Richie, he’s working with Sam in a bowling alley, and when she learns that her sister has been attacked, Richie goes with Sam to Woodsboro to keep her safe.

Every Scream movie needs a resident film expert to explain the intricacies of the genre, and in the 2022 Scream, that character is Mindy, played by Jasmin Savoy Brown (The Leftovers). Gillett describes Mindy as an obsessive horror buff who speaks in a rapid-fire delivery and can be snarky and overly honest at times.

From the moment the filmmakers met Mason Gooding (Booksmart), they knew he was the only actor to plays Mindy’s athletic twin brother Chad. Throughout his career, Gooding has played many jocks and student athletes, and what he enjoyed most about playing Chad was being able to satirize those tropes.

Rounding out the cast are new additions Dylan Minnette (13 Reasons Why) as Wes, Sonia Ammar (Jappeloup) as Liv, Mikey Madison (Once Upon a Time… in Hollywood) as Amber, and Kyle Gallner (Ghosts of War) as Vince.

Minnette — whose character’s name is an affectionate tribute to Craven — was such a fan of the Scream series, he personally reached out to the filmmakers and lobbied for the role. Although at first glance Minnette’s character might appear to be the traditional nerdy member of the group, the actor didn’t see him that way at all. “What’s interesting about Wes is that he’s actually kind of cool,” Minnette says. “He’s just a little bit sheltered by his mom. But he’s very well developed in other ways.”

Scream is directed by Matt Bettinelli-Olpin & Tyler Gillett of the filmmaking group Radio Silence (Ready or Not, V/H/S).  The film is written by James Vanderbilt & Guy Busick, based on the characters created by Kevin Williamson.