It’s a kind of confident filmmaking that I’m not used to and I enjoy it immensely.

I’ve had the immeasurable pleasure of being able to see Denis Villeneuve’s ‘Dune‘ twice. The first was at a friend’s house, who has a Smart TV, a VPN, and an HBO account. The second time was at a cinema with Dolby Atmos surround sound and in both instances, I was absolutely overwhelmed by seeing a novel I read as a teenager, over 25 years ago, come to life on screen before my eyes. Everything about Villeneuve’s “Dune” is immense. From the scale of his depiction of Frank Herbert’s award-winning and much-loved novel’s universe, to the production design of the buildings and transportation in this very alien world, to the score and sound design. The film was made to be immersive, bringing you into the sand dunes of the planet Arrakis and the messianic story of Paul Atreides, who may or may not be the promise of a prophecy for a brighter future.

In its 156-minute running time, the film unfolds slowly, trying to build the world and the reality of this narrative that is set tens of thousands of years in the future. The book is dense and filled to the brim with information that allows you to understand how this world works, and Villeneuve spends the first hour establishing as much as he can without sacrificing narrative movement. Immediately, we are told about the importance of spice, a rare mineral found in the sand dunes of the planet Arrakis, that the whole imperium needs for space travel. As one family has gone rich from harvesting spice from Arrakis, the brutal Harkonnens, the emperor has pulled them out of Arrakis to give it to House Atreides to rule and run.

But this is merely the beginning maneuvers of a political game that threatens peace within the whole imperium. And while this is happening, Paul, the young son of the Duke of House Atreides, is awakening to his birthright that is centuries in the making.

It’s a lot to take in at one sitting. I’ve read the books so it was very easy for me to follow but Villeneuve doesn’t drag down his story to explain all of this. Scriptwriters Jon Spaihts, Eric Roth, and Villeneuve go straight into as much as they can, leaving the story to be put together by the audience from whatever they can pick up in the dialogue. Story points are implied. Some concepts are left unexplained. It’s as if the screenwriters knew that in the era of the Internet, anyone can quickly go to Youtube or check Wikipedia to understand the backstory of certain things — like who are the Bene Gesserit, a sacred order of women with the power to command people with their voice, amongst other things — and so they give us just what we need to follow but leave the rest to faith.

It’s a kind of confident filmmaking that I’m not used to and I enjoy it immensely. The stunning visuals, the quiet human moments between Paul and his father and Paul and his mother, the captivating dream sequences that are so integral to Paul’s realisation of his potential; all of this bring you into this rich world so that, when the action really starts after the first hour, everything has been set for the real adventure story.

I love Marvel movies, don’t get me wrong, but there’s a kind of accessibility to the work that makes it so easy to understand. There’s joy in that as well. But Villeneuve’s ‘Dune’ asks you to really focus all your attention on the screen so that you can take everything in. Blink, and you’ll miss something important.

It has been a long time since a movie of this scale was unafraid to be misunderstood. I think that’s a wonderful thing.

What I love most about this adaptation of ‘Dune’ is how heavily Villeneuve leans into Herbert’s criticism of Western colonization in the Middle East. The native people of Arrakis, the Fremen, are not happy that the Imperium is in their lands, taking their spice, and treating them badly (as the Harkonnens have). Even in the books, the language of the Fremen borrows heavily from Arabic, and Villeneuve and his team cast non-Whites to portray them. With their clothing and customs very Middle Eastern in design, the politics of this film becomes apparent. “Dune” becomes this harsh criticism against western’s civilization’s abuse of the oil-rich countries of the middle east. Spice as a metaphor for oil.

All of this was lost to me when I first read the book as a teenager. I was more involved in the science fiction of the book — The Voice abilities of the Bene Gesserit and the adventure that followed — but, now as an adult, I watch this movie and feel so connected to the statements against imperialism.

There is a war brewing among the “great houses of the imperium” and Arrakis is caught in the middle, a planet that wants nothing to do with their battle but is central to the fight because of the resources found within it. As interesting as Paul’s story may be — the classic coming-of-age story of a messiah in the making — it is the world of “Dune” and the themes that are running through it that makes me excited for part 2.

There’s nothing to say about the exceptional cast — Timothee Chalamet, Rebecca Ferguson, Oscar Isaac, Josh Brolin, Stellan Skarsgard, Dave Bautista, Zendaya, Jason Momoa, and Charlotte Rampling and Javier Bardem — they are fantastic actors and they never get swallowed by the immensity of this film. They blend into the world and the story.

I read this book as a teenager and saw the 1984 David Lynch version, but I never thought I’d see it now, as an adult, fully realised in cinematic form with all the majesty and epic-ness that the book gave me over 25 years ago. This is a dream come true. I cannot wait for the second installment. I hope it comes soon.

––
Dune is now showing in theaters nationwide. Find a cinema near you. 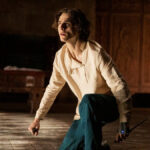 Follow a young hero's journey to the most dangerous planet in the universe in 'Dune'!