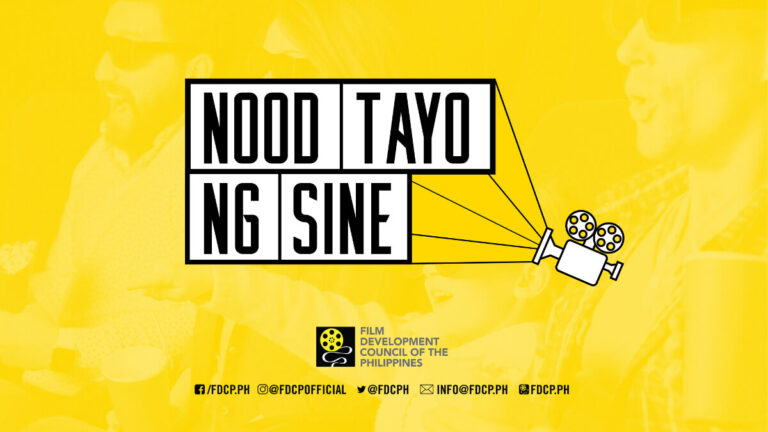 The online campaign aims to remind audiences of the cinema experience and have them show their support to the local cinemas during the pandemic.

More than a year since local cinemas have been closed due to the COVID-19 pandemic, the Film Development Council of the Philippines (FDCP), through the #NoodTayoNgSine online campaign, aims to support the cinema exhibition industry by encouraging Filipino viewers to show their enthusiasm when local cinemas safely reopen.

Cinema, unlike watching at home, is an incomparable experience that brings strangers from different communities together for entertainment or appreciation for the art of film. #NoodTayoNgSine is a call to action involving stakeholders of the industry including the filmmakers, artists, workers, distributors, cinema owners, and audiences to come together as one in supporting the resumption of local cinemas.

Last year, #NuodTayoNgSine was launched alongside “Binging During Quarantine,” a campaign that prompts stakeholders to share their favorite films that are available on various digital platforms. The #NoodTayoNgSine microsite (fdcp.ph/NoodTayoNgSine) on the FDCP website is part of the campaign’s initiative where people are encouraged to sign up to show their patronage for local cinemas when they reopen.

On the relaunch of the campaign last September 1, the #NoodTayoNgSine Campaign Reel was streamed on FDCP Channel and Nood Tayo ng Sine Facebook and a one-time free screening of the documentary film supported by GMA Network, “Palasyo ng Pelikula” by Howie Severino was available on the FDCP Channel.

“As we commemorate the invaluable contribution of the filmmakers and stakeholders of the film industry this September, we would like to remind everyone of the importance of local cinemas that gave life to the films that we enjoy and love, and that is the essence of the online campaign #NoodTayoNgSine,” said FDCP Chairperson and CEO Liza Diño.

To remind the Filipino viewers of the importance of cinema and to advocate for both the local cinema industry and the safety of the audiences, a 90-second campaign ad exhibiting the nostalgia of the cinematic experience to Filipinos will be set out along with the continuation of the #NoodTayoNgSine microsite, a series of sine talks comprising interviews from filmmakers and other personalities on their personal experiences in the cinemas, and the Safety and Health Officers Training Seminar (SHOTS) training for cinema workers on September 13 to 17.

To ensure the safety of the resumption of local cinemas, FDCP will be producing safety protocol infomercials through its social media pages to raise awareness and to endorse both cinema management and moviegoers to adhere to the safety protocols approved by the Department of Health and Inter-Agency Task Force on Emerging Infectious Diseases.

#NoodTayoNgSine online campaign is presented by FDCP in partnership with Ortigas Malls, Ortigas Cinemas, and Estancia.