Viber, the leading free instant messaging application in the Philippines, introduces the first Filipino band - the wacky foursome of the Itchyworms - to create their very own Viber sticker pack.

Viber, the leading free instant messaging application in the Philippines, introduces the first Filipino band – the wacky foursome of the Itchyworms – to create their very own Viber sticker pack. 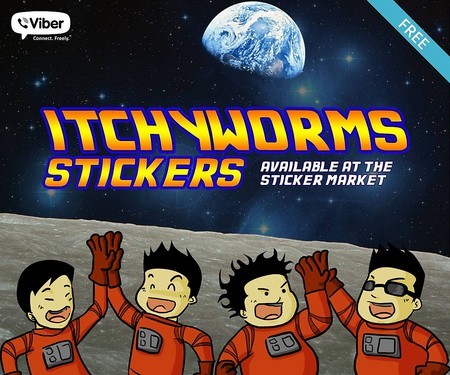 Barkadas can have more fun chatting through Viber with stickers created by the popular band themselves composed of Jugs Jugueta, Jazz Nicolas, Chino Singson, and Kelvin Yu. Itchyworms: Lost in Space Stickers, also known as #ItchyVibe, are perfect for Filipino group conversations.

It was recently launched through a fan gig, dubbed as “The Itchyworms: Lost in Space”, at Route 196, a famous live act venue in Quezon City. Itchyworms fans were treated to #ItchyVibe freebies and prizes from T-shirts to printed stickers and Viber Hours of violet-colored cocktails.

“We wanted a Filipino band to work with us on creating a sticker pack for barkadas. Itchyworms fit the brand and the stickers they shared were exactly what we were looking for–something fun that friends will use. They embody the spirit of fun, cool and easy going,” Viber Philippines country manager Crystal Lee said.

The Itchyworms are equally happy to partner with Viber. “We're so proud to say that we are the first Pinoy band to get a Viber sticker pack, and it's really quite surreal. We're just so happy and excited for all the kids and the not-so-kids to start using the #ItchyVibe stickers,” Itchyworms co-lead vocalist Jugs Jugueta shared.

“It was serendipity,” he added. The band was working on their new album, “After All This Time,” featuring a fictional character on the cover named Astronaut June Galvez, created by artist CJ De Silva-Ong. Their in-house artist Dan Panaligan then designed its cartoon version to be used in merchandise. “We bounced the idea to the Viber peeps and they liked our initial designs during the first meeting and the rest was history. The #ItchyVibe stickers show how the Itchyworms talk to each other. Now, we can share that to everyone and so do other barkadas.”

Visit the following for your Viber updates at: