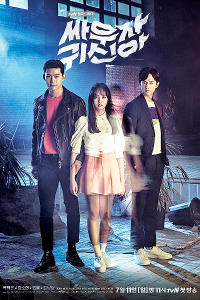 Park Bong-pal (Ok Taec-yeon) has grown up with the ability to see ghosts. He uses his power to work as an exorcist, banishing ghosts in order to make enough money to undergo a procedure that will take his ability away. At a haunted high school, he encounters Kim Hyun-ji (Kim So-hyun) a feisty high school student who, because of a traffic accident, became a wandering spirit. Hyun-ji believes that Bong-pal might hold the secret as to why she is a spirit. In order to be freed from endlessly wandering the earth and be able to ascend to the next life, Hyun-ji convinces Bong-pal to let her move in, and the two become ghost fighting partners.

With Hyun-ji, Bong-pal finds that he can fight even stronger ghosts, but also learns that not all ghosts are malevolent. Working and living together, Bong-pal, a long time loner, finds himself falling in love with Hyun-ji, who returns his feelings. However, both are unaware that they are being stalked by an evil spirit that was the cause of Hyun-ji's accident, and is the reason Bong-pal can see ghosts.

[About:]
Bring It On, Ghost is a South Korean television series starring Ok Taec-yeon, Kim So-hyun and Kwon Yul. It is adapted from webtoon of the same name which was serialized on Naver from 2007 to 2010. The series aired on cable network tvN on Mondays and Tuesdays at 23:00 (KST) time slot for 16 episodes from July 11 to August 30, 2016. The series was well-received domestically and internationally. It was ranked as the ninth most watched cable drama in Korea during 2016.