5 Reasons Why You Must See ‘Godzilla vs. Kong’ on HBO GO

Two mythic adversaries will meet in a spectacular battle for the ages as ‘Godzilla vs Kong’ brings a thrilling, long-awaited showdown to HBO GO from June 23.

With legends set on a collision course with each other, who will emerge victorious? Discover the biggest reasons why you need to see ‘Godzilla vs. Kong’ on HBO GO.

A Meeting Between Two Cinematic Titans

Director Adam Wingard states, “Godzilla and Kong have an incredible legacy in film. Originally you could look at them almost as monsters from the East and West, Godzilla storming Tokyo and Kong being brought by man to New York. But however you perceive them, they are movie icons that excite audiences all across the globe.”

Producer Mary Parent echoes those sentiments, acknowledging that Godzilla and Kong are a pairing that fans have been eagerly waiting for. “We’ve had both Godzilla and Kong battling to survive and thrive in their own spheres, so bringing them together as the surviving heavyweight champions at last is the natural next step.” Whether you root for Kong or Godzilla, she adds “It’s all about getting your popcorn and enjoying an incredible ride.”

The film not only promises intense, thrilling battles, but also emotions, laughs, and even a mystery brewing beneath the surface of it all. Wingard elaborates, “The story starts in a place where humanity has accepted Godzilla as a savior, or a protector, and we’re flipping that and showing that something weird is going on with him—he’s on the attack and acting recklessly, and no one knows why.”

“The film picks up close to the last one, so in a lot of ways we’re picking up with Godzilla where we left off,” Wingard adds. “But he’s suddenly behaving differently, and the scientists at Monarch—the government’s crypto-zoological agency dedicated to studying the Titans—as well as Madison Russell and a few others, are trying to figure out why he’s seemingly turned his back on humankind. Face it, it’s great if Godzilla’s on your side, but the second he turns against you, you’re in really big trouble.”

Now, he’s heading straight for Kong, newly liberated from Skull Island after proving that the isolated locale can no longer contain him.

Principal photography for “Godzilla vs. Kong” took place in Hawaii in the U.S. and in Queensland, Australia. Both were transformed to help bring the story’s settings to life, realistic and fantastical, from battles on land and at sea, and a breathtaking Hollow Earth that might be the very origin of the Titans.

Beginning in Hawaii on the island of Oahu, the designers utilized the region’s jungle environment as the Pacific Ocean’s uncharted Skull Island biodome, observed by a legion of Monarch researchers and scientists.

Moving to Australia’s Gold Coast, the company accomplished some location work as well as the majority of the stage work, with builds that featured the transport ship’s bridge—including an outdoor water tank—Monarch’s outposts and mission control, Antarctica “exteriors,” the busy streets of Hong Kong, the cockpit of the APEX Heli-Craft, and the massive Hollow Earth.

With the Monarch organization still entrenched in the welfare of both Godzilla and Kong, and with outside forces at work as well, the story ensures the ancient rivals’ paths cross, at the same time upping the personal stakes. Filling out the cast is a strong ensemble spanning franchise favorites and a mix of new characters, delivering the emotional layers and connections to both titular characters.

For more movies from the MonsterVerse, both ‘Godzilla’ and ‘Godzilla: King of The Monsters’ are available to stream or download on HBO GO.

Stream or download Godzilla vs. Kong on HBO GO. Download the app at the App Store or Play Store on your device. You can also access HBO GO via Cignal or at https://www.hbogoasia.com/. HBO GO can be accessed via Android TV, Apple TV, LG TV and Samsung Smart TV – and comes with AirPlay and Google Cast functionality. 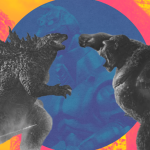 'Godzilla Vs. Kong': 5 Facts You Might Not Know About The Two Titans

Learn a few fun facts about the laser-shooting lizard and the gargantuan primate before their big face-off!

The clash between two titans will be unveiled this March!

'Godzilla Vs. Kong' Drops New Poster Ahead of Trailer Release