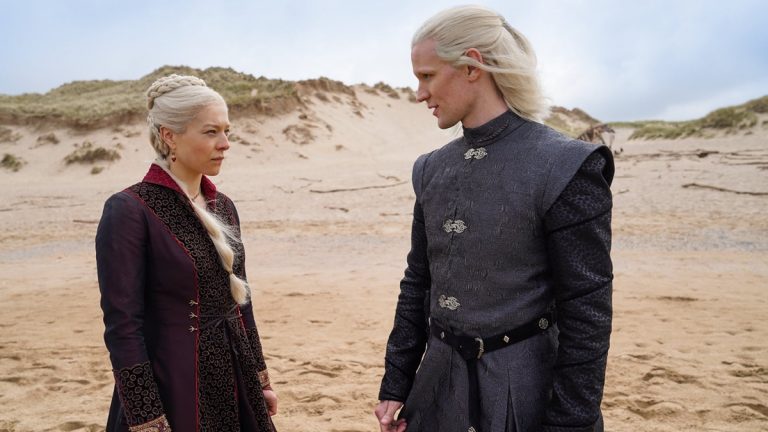 HBO has finally released the first-look images of the cast House of the Dragon — the upcoming prequel to Game of Thrones. The new series, which is based on George R.R. Martin’s Fire and Blood, takes place 300 years before the events of the OG Game of Thrones and tells the beginning and end of House Targaryen. It stars Matt Smith, Emma D’Arcy, Steve Toussaint, Olivia Cookie, and Rhys Ifans.

Check out the photos below:

Emma D’Arcy plays Princess Rhaenyra Targaryen, the eldest child of King Viserys Targaryen. The official character description from HBO read: “Many would say that Rhaenyra was born with everything… but she was not born a man.”

Matt Smith takes on the role of Prince Daemon Targaryen — the king’s younger brother and heir to the throne. HBO described him as a “peerless warrior and dragonrider” who “posdesses the true blood of the dragon.”

Steve Toussaint plays Lord Corlys Velaryon, also known as The Sea Snake. He’s the Lord of the House of Velaryon, and is also the famed nautical adventurer who “built his house into a powerful seat that is even richer than the Lannisters.”

Rhys ifans plays Otto Hightower, the Hand of the King who serves Viserys and his Realm. Meanwhile, Olivia Cooke plays Alicent Hightower — Otto’s daughter who’s raised in the Red Keep and is the “most comely woman” in the Seven Kingdoms.

House of the Dragon was created by George R.R. Martin and Ryan Condal. Miguel Sapochnik and Condal serve as the showrunners for the series, while Martin serves as executive producer.