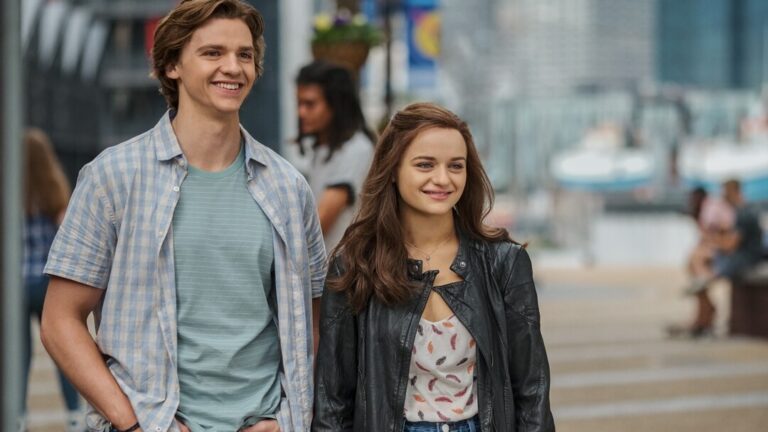 ‘The Kissing Booth 2’ Stars Joey King and Joel Courtney Talk About the Sequel, Dance Dance Mania, and their OTPs

Two years since The Kissing Booth premiered on Netflix, Elle, Lee, and the rest of everyone’s favorite characters return to our screens tomorrow, July 24, for The Kissing Booth 2! Fans of the first film better watch out for some more high school dilemmas, Dance Dance Mania scenes, and new characters to fall in love with.

The Kissing Booth 2 centers on Elle Evans as she heads back to high school for her senior year, where she has to work on her long-distance relationship with Noah, her friendship with Noah’s brother Lee, and the charismatic new guy in school, while also juggling with her college applications. Things take a turn, though, when Elle sees Noah growing closer to a seemingly-perfect girl, making Elle question her trust on him, and on whom her heart really belongs to.

Just in time for the film’s premiere tomorrow, we got to talk with Joey King and Joel Courtney in a virtual press conference along with a couple of other members from the press. Check out the highlights of the Q&A where they talked about Dance Dance Mania, their movie ships, the advice they will give their characters, and more here:

Before being cast in this movie, how good were you at DDM? Did you have to learn it for the movie?

JOEY KING:  I am terrible at Dance Dance Mania or Revolution. I feel like I’m very fortunate that we had highly experienced choreographers helping us through because I needed help a lot. I loved dancing. I love doing choreography but if you put me on one of those machines…oh, goodness!

JOEL COURTNEY: There’s eye-foot coordination [involved in DDM] that you need to look at the screen and know what you’re stepping on, and then know what comes afterward. I remember, actually, we did it one time at an arcade, Joey, and you kicked my butt. You are far better than I was, I do remember that.

What was it like to work with Maisie and Taylor for The Kissing Booth 2?

JOEL COURTNEY: Oh my goodness, Maisie and Taylor – just the sweetest, most talented kind people in the entire planet. I have not that much time with Maisie on camera, and it is one of the saddest things for me. I wish that we had more scenes together. It just didn’t work out, with Harvard and LA and just being across the country. But I had some amazing times on set with Taylor, [who is the] the sweetest guy [and is] so talented. He really just came into The Kissing Booth universe, and [he] just fit perfectly.

JOEY KING: I agree 100% with that. Both of them now are some of my closer friends in life. They came in, and our whole crew just welcomed them with open arms and they just fit right in. They’re just the nicest people [and] both of them are the type of people who would just do anything for anybody. They’re so generous, so loving, so talented. We honestly hit the jackpot like there.

If it were up to you, are you for Team Marco or Team Noah?

JOEL COURTNEY: I’m Team Marco. He’s such a good guy, and I feel like I’m a nice guy. I’m one of those classic nice guys, so I root for the nice guy when I see him. Noah is more of like the bad boy turned to [be] a little softer [and] more in touch with his emotions. He’s honestly trying to do a relationship the right way as opposed to all the flings that he had in high school. But there’s something about a nice guy, you know. You got to have those nice guys.

JOEY KING: I’m team Narcos. Both of them. Another popular show on Netflix! I think that Elle has a lot of stuff on her plate, a lot of figuring out to do. For me, it’s difficult to say because whatever I say will be really read into by the fans. But I do agree with Joel. There is something so special about Marco. He is such a wonderful guy played by a wonderful person, Taylor Perez. It was just a real treat to watch him and see him in this role. I think one of my favorite things about Marco is his introduction in the film so that alone is a huge reason to like him. It’s just the funniest thing.

Lee has been caught up in this conflict between his best friend and his girlfriend. If you had a choice, would you have done something differently? Would you have chosen someone?

JOEL COURTNEY: I think if you’re going to be in a relationship with someone, I think you need to be willing to choose them 100% of the time.

The Kissing Booth 2 bucked the trend of seeing a character disappear into a relationship when they first got a boyfriend. We see Elle as she pulls away from that and leaning more into friendship. Is this something that you could identify with?

JOEY KING: I think Elle was really good at balancing friendship with relationships. It’s interesting because she’s dating her best friend’s brother, so she doesn’t have to stray too far away from her best friend when it comes to proximity, even though that she is in a relationship.

I think that when you get into a relationship, one of the things [that happen is] people do lose their identity a little bit and start to just kind of pull away from their friend groups. And the most important thing is to just find a balance. I think Elle has always been pretty decent at that. She has her ups and downs and gets herself into some pickles every now and then, but all in all, she’s a smart girl who just has to figure some things out.

Elle has been in this conflict between college, friends, and love. So if you could give advice to Elle as Joey, what would you say to her?

JOEY KING: I think my biggest advice to Elle, is, don’t throw your life away for somebody that could be not the best partner to you. Also don’t make your decision based on what your friend just wants you to do. You have to make a decision that makes you happy, so weigh your options. Think about it hard.

I think Elle’s biggest problem is being honest with the two people who mean the most to her and she tries to keep everybody happy and hide things. So I think my biggest advice is just to try to be a little more transparent.

Where do you think Elle should go to college, Berkeley or Harvard?

JOEY: As Elle herself, it’s hard. She’s torn between a promise she made her best friend and a life with her boyfriend and she doesn’t know what to choose. But I trust her to make the right decision. And I hope Netflix lets us find out what she does at some point.

Could you explain the insane popularity of the movie and then the franchise? What’s your take on it?

JOEY KING: I think people crave those classic 80s romcoms that we just weren’t getting anymore. And so this movie is tipping our hat off to all those wonderful 80s romcoms and we have the lovely Molly Ringwald to prove it. I just think that [the movie is] pure fun. No one can really be in a bad mood when watching it.

If you guys do end up filming The Kissing Booth 3, how do you want it to play out?

JOEL COURTNEY: I think people just need to make their own decision, you know. I think they need to find peace with that. It’s almost like a codependent relationship between Elle and Lee. “We’ve always been there, it’s always the two of us. We’re practically inseparable.” When you find one you find the other. I think it would have to be one of those things where they make their own decisions, and they live with it. I mean, they’re out of high school, and they’re making big decisions and there would have to be a lot of peace with it.

JOEY: I would like to see Elle take a gap year, become a cat lady, and a serial knitter and, you know, maybe just start an Etsy shop. Wishful thinking, am I right? 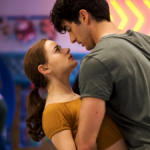 Rules can be broken, but so can hearts. Watch 'The Kissing Booth 2' trailer now!