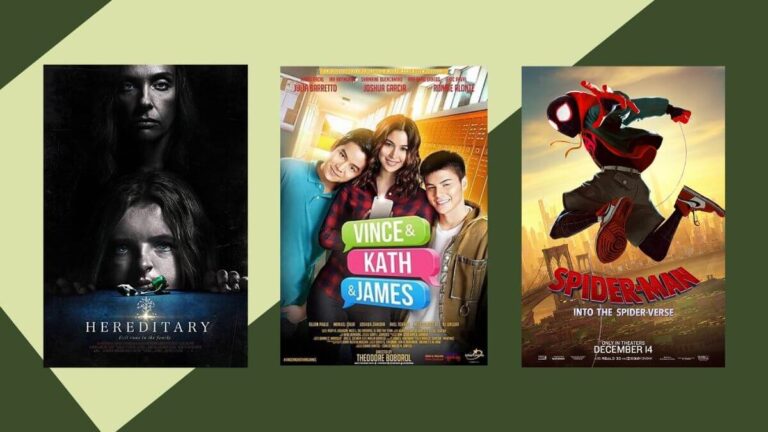 Isn’t it a bummer when you see your favorite movie already playing halfway through when you turn on the TV? Fret not! From rom-com and action to horror and thriller, we’re giving you a heads up on all the must-watch movies on TV from June 29 to July 5, 2020.

1. 2 Fast 2 Furious
(1:15pm, HBO)
Brian, a former officer, partners with Roman Pierce, his ex-convict friend. As a part of a deal with the FBI, Brian and Roman have to bring down Verone, a drug lord, to erase their criminal record.

2. Joy
(3pm, HBO)
Despite facing several hardships, Joy Mangano, a divorced mother of two, rises against all odds and sets up a successful business empire.

3. Hereditary
(6:50pm, FOX Movies)
When the matriarch of the Graham family passes away, her daughter and grandchildren begin to unravel cryptic and increasingly terrifying secrets about their ancestry, trying to outrun the sinister fate they have inherited.

4. Girl, Boy, Bakla, Tomboy
(7pm, Cinema One)
Quadruplets are split into pairs and raised apart by their parents. They meet as adults by accident and have a tough choice to make when one needs a liver transplant.

5. The Trial
(9pm, Cinema One)
Ronald, a mentally challenged man, is put on trial after allegedly raping his teacher.

2. There’s Something About Mary
(2:05pm, HBO)
Ted, a geek, attempts to track down his high-school sweetheart Mary and hires a private detective to know her whereabouts. He soon realises that he has to compete with others in order to impress her.

3. Ocean’s Eight
(4pm, HBO)
Debbie Ocean is released from jail after serving a prison sentence. She assembles a special crew of seven women to steal a diamond necklace, worth 150 million dollars, from the Met Gala.

1. Charlie’s Angels: Full Throttle
(1:50pm, HBO)
The Angels track down rings containing the names of those in the FBI’s witness protection program. However, the witnesses begin to get murdered one by one.

2. Praybeyt Benjamin
(5:30pm, PBO)
When civil war breaks out in the Philippines, a gay dance teacher (Vice Ganda) is forced to join the military in order to spare his ailing father.

3. Die Hard
(7:50pm, Cinemax)
Hoping to spend Christmas with his estranged wife, detective John McClane arrives in LA. However, he learns about a hostage situation in an office building and his wife is one of the hostages.

4. Status: It’s Complicated
(9pm, Cinema One)
Two roommates with opposing relationship views decide to trade dating lifestyles. The more conservative of the two will try playing the field, and the playboy will try to seriously commit.

1. The Fault in our Stars
(9:05am, HBO)
Two cancer-afflicted teenagers Hazel and Augustus meet at a cancer support group. The two of them embark on a journey to visit a reclusive author in Amsterdam.

2. Scorpion King: Book Of Souls
(12:35pm, Cinemax)
The Scorpion King teams up with the fierce female warrior Tala in search of the powerful Book of Souls, in order to defeat the evil warlord Nesberek.

3. X-Men: Days Of Future Past
(4:35pm, FOX Movies)
Wolverine travels back in time to stop Mystique from assassinating Bolivar Trask, whose death leads to the creation of the Sentinels, which are robots designed to kill mutants.

4. Ang Dalawang Mrs. Reyes
(7pm, Cinema One)
Two devoted wives find out their husbands are in a gay relationship.

5. I’m Ellenya L.
(11pm, Cinema One)
It tells the story of Ellenya Lakampati, an ambitious girl who refuses to get a stable job because her goal is to become a famous social media influencer.

1. Mission Impossible II
(1:25pm, HBO)
Ethan Hunt, a member of the Impossible Missions Force, is dispatched to Sydney to stop a terrorist organization from laying their hands on a genetically-engineered virus created in a lab.

2. Inside Out
(5:30pm, HBO)
Eleven-year-old Riley moves to San Francisco, leaving behind her life in Minnesota. She and her five core emotions, Fear, Anger, Joy, Disgust and Sadness, struggle to cope with her new life.

3. The Panti Sisters
(7pm, Cinema One)
A father announces to his three sons that he is dying of cancer.

4. Doctor Strange
(9pm, FOX Movies)
In an accident, Stephen Strange, a famous neurosurgeon, loses the ability to use his hands. He goes to visit the mysterious Ancient One to heal himself and becomes a great sorcerer under her tutelage.

5. Abraham Lincoln: Vampire Hunter
(10pm, Cinemax)
When his country is threatened by a ferocious group of vampires, Abraham Lincoln, the 16th President of the United States, sets out on a mission to eliminate them.

1. Pitch Perfect
(10:15am, HBO)
Beca, a college fresher, reluctantly joins an all-girls a cappella group and later infuses freshness into their repertoire. They then take on a male a cappella group in a competition.

2. Starting Over Again
(3pm, Cinema One)
Architecture student Ginny and history professor Marco fall in love, bringing out the best in each other until their break up. Years later, the two meet again on a joint project.

3. Fantastic Four: Rise of the Silver Surfer
(11pm, Cinemax)
The Silver Surfer, an intergalactic herald serving Galactus, plans to destroy the Earth for his master. However, four superheroes must intervene and battle the villainous force to save the planet.

1. The Lord Of The Rings: The Two Towers
(11:05am, HBO)
Frodo and Sam arrive in Mordor with the help of Gollum. A number of new allies join their former companions to defend Isengard as Saruman launches an assault on it.

2. Four Sisters and a Wedding
(1pm, Cinema One)
Three sisters reunite to dissuade their younger brother from marrying his fiancee. As they interact, they face the feelings and issues they have kept buried for a long time.

3. Vince & Kath & James
(5pm, Cinema One)
Love can be complicated, especially when Vince agrees to secretly woo Kath via text on behalf of James, while falling for her, too.

4. John Carter
(5:05pm, FOX Movies)
John Carter finds himself transported to Mars, where he learns about his superhuman capabilities. Things take a turn when he rescues a princess who is on the run.

5. Spider-Man: Into The Spider-Verse
(7pm, HBO)
After gaining superpowers from a spider bite, Miles Morales protects the city as Spider-Man. Soon, he meets alternate versions of himself and gets embroiled in an epic battle to save the multiverse.