Netflix’s ‘The Witcher’ Anime in The Works, Soundtrack Out in Two Days!

Fans are sure to be delighted with this back-to-back news from Netflix!

The Witcher fans just have to toss their coin to Netflix, because the streaming service is working on a new animated film starring our favorite mutant monster hunter!

After it debuted as a Netflix TV series back in December, The Witcher was quick to garner attention, especially to fans of the franchise and the medieval fantasy genre. Now fans of the show are surely thrilled to hear that an anime film titled The Witcher: Nightmare of The Wolf, will be the next addendum to Netflix's interpretation of Andrzej Sapkowski's stories.

Netflix announced the news on Twitter, with showrunner Lauren Hissrich retweeting it with the caption: "It's a big day here in #TheWitcher world — and I've been keeping this one secret for over a year!"

The rumors are true, a new Witcher story is in the works! The anime film, The Witcher: Nightmare of the Wolf, will take us back to a new threat facing the Continent. Brought to you by the Witcher team @LHissrich and @BeauDeMayo, and Studio Mir the studio behind Legend of Korra.

As the tweet teases, there will be a new threat coming to the Continent, but that's about it. Let's just hope that more details including its voice cast and release date, will be revealed shortly. As for the people behind this new film, The Witcher showrunner Lauren Hissrich and writer Beau De Mayo will join forces with Studio Mir, who is known for action-packed animated shows like Legend of Korra and Voltron: Legendary Defender, to bring this animated film to life.

But that's not all! The much-requested sountrack from the show, will be coming in two days, and you don't really have to wait for Jaskier's Toss A Coin because it's out now on Spotify!

"The Witcher is an epic tale of fate and family. Geralt of Rivia, a solitary monster hunter, struggles to find his place in a world where people often prove more wicked than beasts. But when destiny hurtles him toward a powerful sorceress, and a young princess with a dangerous secret, the three must learn to navigate the increasingly volatile Continent together," this according to Netflix's synopsis for the show.

The series stars Henry Cavill, Anya Chalotra, Freya Allan, Jodhi May, Joey Batey, and more. You can stream The Witcher now on Netflix. 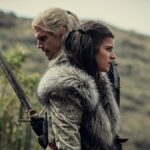 The Witcher Prequel 'Blood Origin' is Coming to Netflix

The Witcher lore is expanding even more!

The Witcher's Timeline Guide and The Showrunner's Reason Behind It

Showrunner Lauren Hissrich also explains how she had come up with that surprising element of the show.

A day after the fan event here in Manila, the local press got the chance to ask Henry Cavill and Lauren Hissrich questions about Netflix's latest medieval fantasy series, The Witcher.

At a press conference held here in Manila, Henry Cavill and Lauren Hissrich delved deeper in their upcoming Netflix series 'The Witcher.'

Henry Cavill is Coming To Manila For Netflix's 'The Witcher' This December!

Are you ready to see the White Wolf?

Based on the best-selling fantasy series of books and starring Henry Cavill, the series will debut all eight episodes on Netflix globally on December 20, 2019.
0