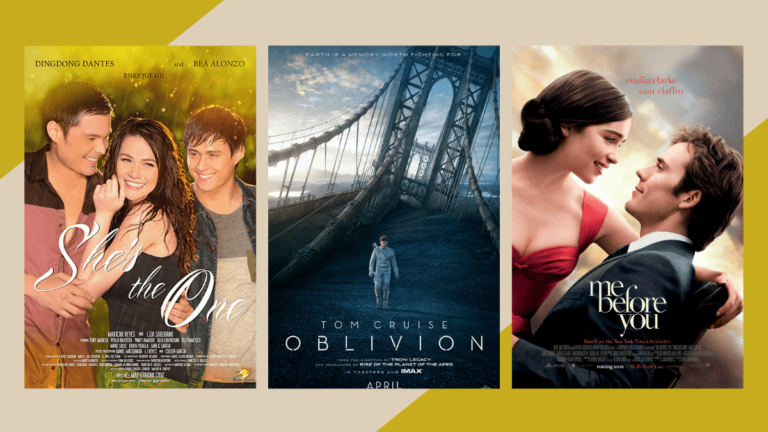 Isn’t it a bummer when you see your favorite movie already playing halfway through when you turn on the TV? Fret not! From rom-com and action to horror and thriller, we’re giving you a heads up on all the must-watch movies on TV from November 22 to 28, 2021.

Camp Sawi
(1:15pm, PBO)
A group of brokenhearted women goes to a resort that specializes in helping people ease their pain.

She’s The One
(7pm, Cinema One)
A morning show host realizes exactly what his dreams are after his best friend appears in a romantic viral video.

Little Women
(7:45pm, HBO)
While the March sisters enter the threshold of womanhood, they go through many ups and downs in life and endeavor to make important decisions that can affect their future.

Meet The Parents
(5:40pm, HBO)
Greg Focker decides to spend a weekend with his girlfriend’s parents before proposing to her. However, her father instantly dislikes Greg, which makes his stay far worse than he imagined.

Finally Found Someone
(7:30pm, PBO)
When a woman is left at the altar, the video goes viral online, and a PR rep is hired to help her. In the end, they realize that they have fallen for each other.

My Perfect You
(9pm, Cinema One)
The story of Burn, a man who’s down in the dumps, and Abi, a girl who helps him see the light again.

Men In Black: International
(5:05pm, Cinemax)
Agent M, a probationary member of the MIB, teams up with Agent H and uncovers a sinister plot that reveals a traitor in the organization aiding an alien invasion.

You Got Me
(7pm, Cinema One)
After a big bust-up with his beloved girlfriend, a guy ends up in the arms of a seductive newcomer. Afterward, she develops an obsession with keeping the newly found romance alive.

Oblivion
(9pm, HBO)
Jack Harper, a drone repairman stationed on Earth that has been ravaged by war with extraterrestrials, questions his identity after rescuing the woman who keeps appearing in his dreams.

Me Before You
(12pm, HBO)
After becoming unemployed, Louisa Clark is forced to accept one which requires her to take care of Will Traynor, a paralyzed man. The two of them soon bond with each other.

Seven Sundays
(9:30pm, PBO)
Siblings reunite when their father is diagnosed with cancer and must settle old issues as they spend time together.

James & Pat & Dave
(7pm, Cinema One)
It follows Pat Reyes who is a hardworking hostel manager and online vegetable seller who trains her boss’ hardheaded and exiled grandson as a hostel employee.

Meet Me in St. Gallen
(1pm, PBO)
Celeste and Jesse have a one-night stand and then go their separate ways, only to end up meeting again in St. Gallen, Switzerland.

The Conjuring
(6pm, HBO)
The Perron family moves into a farmhouse where they experience paranormal phenomena. They consult demonologists, Ed and Lorraine Warren, to help them get rid of the evil entity haunting them.

The Breakup Playlist
(7pm, Cinema One)
A story about an aspiring professional singer and a rock singer who collaborates on a song. As they work on their song, they start to develop feelings for each other.

The Conjuring 2
(7:50pm, HBO)
Peggy, a single mother of four children, seeks the help of occult investigators Ed and Lorraine Warren when she and her children witness strange, paranormal events in their house.

The Conjuring: The Devil Made Me Do It
(10pm, HBO)
Arne Cheyenne Johnson stabs and murders his landlord, claiming to be under demonic possession. Ed and Lorraine Warren investigate the case and try to prove his innocence.

Venom
(7:10pm, HBO)
While trying to take down Carlton, the CEO of Life Foundation, Eddie, a journalist, investigates experiments of human trials. Unwittingly, he gets merged with a symbiotic alien with lethal abilities.

Freddy Vs. Jason
(11:55pm, Cinemax)
Freddy who is losing power resurrects Jason to terrorize the people of Springwood. But Jason starts intruding on Freddy’s territory and this eventually leads to a stand-off between the two monsters.