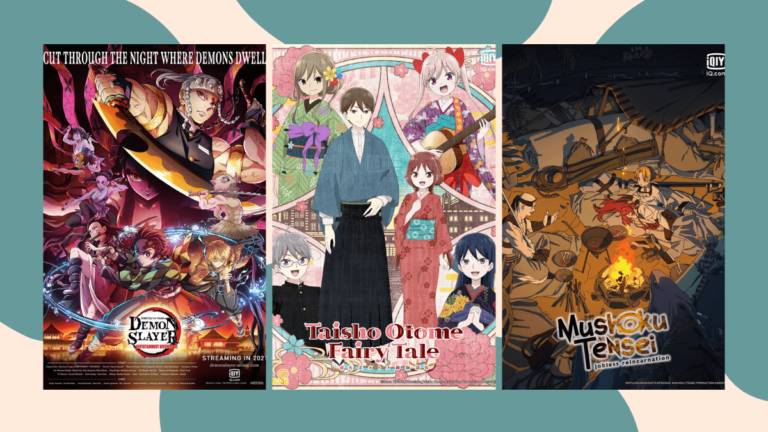 After its anime content drove millions of views in Southeast Asia, Macau, and Taiwan during the first 9 months of 2021, iQiyi releases its slate of anime content set to premiere on the site in the 4th quarter of the year. This is to expand its anime catalog, which now carries some of today’s most popular anime series.

Mark your calendars, anime lovers, here are 14 anime series to look forward to this 2021, from the second season of Demon Slayer to the heroic-fantasy series Mushoku Tensei: Jobless Reincarnation:

Demon Slayer: Kimetsu No Yaiba Entertainment District Arc picks up right after the events of the Mugen Train movie and will continue to follow Tanjiro, Zenitsu, Inosuke, and Nezuko, who all join the Sound Hashira Tengen Uzui to find the demon that’s been terrorizing Yoshiwara’s red-light district and its people.

The first season of Demon Slayer, as well as the Mugen Train movie, are both streaming on iQiyi.

86, or Eighty Six, is an anime series set in the Republic of San Magnolia, which has been besieged by its neighbor, the Giadian Empire, which was responsible for creating unmanned drones called the Legion. After years of research, the Republic is able to develop autonomous drones of their own, which turns the one-sided struggle into a war. Beyond the walls that protect the territories of the Republic is the “Eighty-Sixth” sector, and its people, called the ‘Eighty-Six’ are stripped of their humanity and forced to fight the Legion under the command of the Republican “Handlers.”

The first part of the series is now streaming on iQiyi.

Mushoku Tensei: Jobless Reincarnation is an Isekai anime series about a thirty-four-year-old shut-in who attempted to do something heroic, only for it to end in a tragic accident. He then wakes up in another world as Rudeus Greyrat, who is starting life again as a baby born to loving parents and in a world of swords and magic.

As a child who was able to preserve his memories and knowledge from his previous life, Rudeus adapts to his new environment, making the most of his new opportunity to conquer his traumatic past and find something which he couldn’t find in his old world — love.

The first part of the series is now streaming on iQiyi.

How a Realist Hero Rebuilt the Kingdom

How a Realist Hero Rebuilt the Kingdom is about Kazuya Soma, who is summoned to a different world called the Kingdom of Elfrieden after the death of his grandfather. There, he reorganizes the financial and political system of the kingdom by proposing policies, using modern knowledge to revive a poor kingdom.

My Senpai is Annoying

My Senpai is Annoying centers on Takeda Harumi, a senior who may look rough but is actually good at taking care of others. On the first day of Igarashi Futaba to work, Takeda mistakenly thinks that she is a high school student because of her stature, making Igarashi’s impression of him quite negative. Things take a turn when the boss assigns Takeda to guide Igarashi.

Taisho Otome Fairy Tale is a romance anime set in the 11th year of the Taisho Era. It centers on Tamahiko Shima, the son of the wealthy merchant family who lost his mother and right hand in a car accident. Just then, an innocent and lively Yuzuki appears in front of the despaired Tamahiko, and she becomes his personal servant and fiance.

The Vampire Dies in No Time

The Vampire Dies in No Time is about a vampire exorcist named Ronaldo who goes to the city of an immortal vampire named Dralc to rescue a kid who entered by mistake. When he arrives at Dralc’s castle, he realizes that the legendary Dralc is actually the weakest vampire in history.

Mieruko-chan is a horror-comedy anime series about a high school student who suddenly becomes able to see ghosts. Faced with this sudden change, she chooses to pretend not to see these supernatural creatures as her way to try to live a normal life.

Boruto-Naruto Next Generations centers on Naruto’s son Boruto, the seventh leader of the ninja village Konoha. He studies at the Ninja Academy, where he meets his new team partners who’ll fight with him against the mysterious incidents in the village.

In Ranking of Kings, a deaf and powerless prince named Bojji is unable to wield even a children’s sword yet still strives hard to be the world’s greatest king despite people thinking otherwise. Things take a turn when he meets “Kage” a shadow who somehow understands Bojji. They eventually become friends and this encounter kickstarts Bojji’s coming-of-age as he meets various people in his life.

Takt Op.Destiny is a story set in the year 2047, when America has fallen to ruin because of monsters called D2, who banned all music that can defeat them. Resisting these monsters are a group of women who has the power of music and hold “scores” that can defeat the monsters.

This romance and adventure anime follows an astronaut named Lev and a vampire girl named Irina who were selected as the test subjects when the instructor of the Union of Zirnitra Republics initiated a plan to send humans and human substitutes into space.

This anime is set in a Japanese city called “New Kyoto,” which has been dominated by a card game called “Build Divide” and has been ruled by the “King.” It follows Teruto Kurabe who joins a battle called “Rebuild” with the help of the mysterious Sakura Banka to defeat the King and have his wish fulfilled.

This anime is about William who is the lone human in the city of the dead and is born with vague memories of a past life in contemporary Japan. Determined to live his life to the fullest this time around, he must try to discover why he was brought to the city and find out what it means to live a full life and not just exist.

How a Realist Hero Rebuilt the Kingdom

My Senpai is Annoying

The Vampire Dies in No Time