After over two decades, I’ve come to enjoy ‘Passion’ with the wisdom of someone who has a better understanding of these characters and what they go through and I really enjoy the added texture that Guevara’s casting has done to the musical.

Stephen Sondheim’s ‘Passion,’ a dark musical about obsession and love finds an interesting new interpretation in The Philippine Opera Company’s revival with the direction of Robbie Guevara. I’ve seen the 1996 filmed production of the musical’s original cast with Donna Murphy and then Repertory Philippines’ staging of it in 1996 with Menchu Lauchengco-Yulo and Michael Williams. After over two decades, I’ve come to enjoy ‘Passion’ with the wisdom of someone who has a better understanding of these characters and what they go through and I really enjoy the added texture that Guevara’s casting has done to the musical.

‘Passion’ is about Giorgio, a young Italian soldier who is assigned to his regiment in a barren and desolate Northern Italian town in 1863. He bids farewell to his lover Clara in a musical number that tackles their unbridled ‘Happiness’ for being in love with each other. In his regiment, life is boring. His fellow officers gamble and gossip but Giorgio can only think of Clara even though he has caught the eye of his commanding officer’s cousin, Fosca.

Fosca is a tragic character. A woman defined by her past tragedy, she is ill and given to frightening outbursts. As Giorgio befriends her, he becomes ensnared in a game of life and death by the military doctor who thinks his attention might be good for her. Instead, she throws herself at him with such intensity that it frightens him.

Giorgio must now navigate through the emotions of a desperate woman, who has the ear of his commanding officer, while navigating a relationship with his lover back in Milan only through letters.

‘Passion’ is a difficult piece because it dives head first into the dark and ugly aspects of love. Fosca has been denied this and her own physical unattractiveness has made her desperate, and in the older versions, sad and pathetic. But with Robbie Guevara’s casting Shiela Valderrama’s Fosca comes off as clever and cunning. There is always something unhinged with Fosca but she always seemed like a sympathetic character. 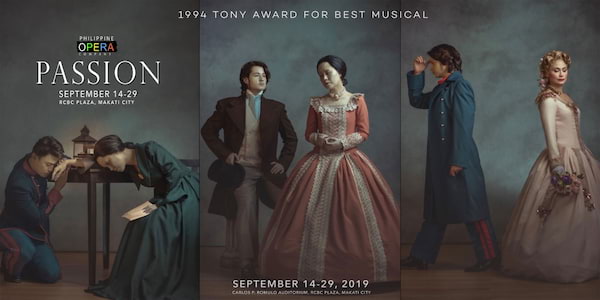 Not Valderrama. Even at her sickest and weakest, there is strength there. A power that comes from knowing loneliness so well that when she sets her sights for something, nothing will get in her way. Not even shame. It’s a lovely texture that works so well with the casting of Vien King as Giorgio and Jasmine Fitzgerald as Clara.

My understanding and memories of previous productions always had Giorgio as a strapping young man of the same age as Fosca and Clara. But Vien King, on stage, seems like a young man, maybe even younger than Clara and Fosca and it creates this space for Giorgio’s goodness and naivete to rise to the surface. Because of his youth, we can excuse his innocence in the way with which he initially treats Fosca and his idealistic and romantic notions of love.

As the musical progresses, we start to truly see how young and naive Giorgio is in comparison to these two women, who understand exactly how this world treats women. Twenty years later, and ‘Passion’ finds an interesting feminist voice that is layered and textured with the interesting casting of Valderrama, King, and Fitzgerald.

All three are fantastic singers and alongside Raul Montesa as Colonel Ricci and Lorenz Martinez as Doctor Tambourri, ‘Passion’ finds a great footing for a strong night of theater. Unfortunately, there were technical issues regarding microphones that need to be addressed in later shows and there’s a need to refine the ensemble performances. There’s a pervasive motif of soldiers marching to transition scenes and the rest of the cast are off-synch nor do they have the posture or presence of military men. At the same time, the orchestra has troubles clarifying Sondheim’s gorgeous score with many of the songs getting muddled in the performance.

These elements need to be tightened up because ‘Passion’ is such an engaging show. Now that I’m older and in this pop cultural landscape that is littered with stories of May-December affairs in film, stories about cheaters and illicit affairs, ‘Passion’ dares to get into the ugliness of it, the darkness of the emotions that come with love and rejection.

There are powerful performances here and wonderful singing. Guevara strips away much of the stage craft to have his performers work in a sparsely decorated stage. It approximates the desolation of the regiment but also somehow references the bleakness of this sordid obsession. This is not some lush and vibrant love story. It’s unbridled and unrestrained passion. It’s as ugly as it is pure and unmerciless. It gives Valderrama and King and Fitzgerald no place to hide so they put it all out in song.

And it’s completely to our benefit. This is the second of three Sondheim shows we will be getting before the year ends. How fortunate we all are for this opportunity for inventive and thrilling interpretations of the celebrated musical legend.