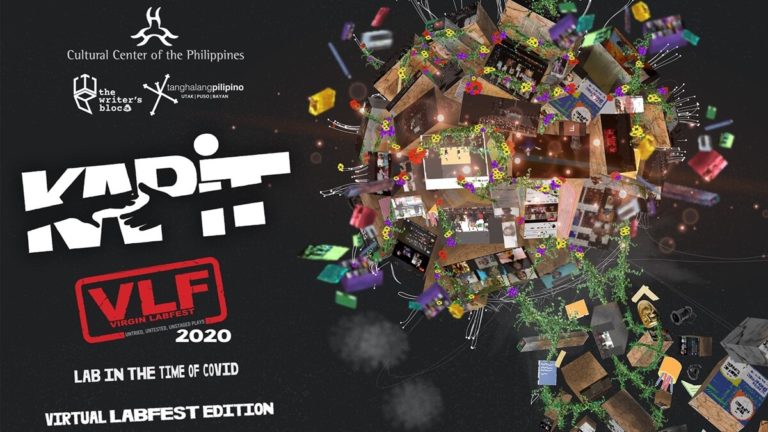 The shows must go on at the VLF!

Our theater-going habits are just one of the many things affected by this ongoing pandemic, but just as they, the show must go on.

The Virgin Labfest 2020 adapts to the new normal by bringing their unstaged and untested plays to a virtual stage this June 10 to 28. Titled VLF 2020 KAPIT: Lab in the Time of Covid (A Virtual Labfest Lockdown Edition), the 16th year of VLF will feature nine new works, three revisited works, and six staged readings.

After dropping the new titles last April, we’re also getting a closer look at the stories waiting to be told. Here are the synopses revealed at the Cultural Center of the Philippines website.

Blackpink by Tyron Casumpang
Directed by Jethro Tenorio
“Tatay, a staunch ally of the gay community, discovers that his youngest son, Bunso, a stauch fan of Blackpink, was prohibited by his school principal to dance “Kill This Love” in their Family Day talent contest. Infuriated, Tatay rushes to confront the principal but Bunso insists that the only way for him to join the competition is if he finds other male students to dance with him. Rejected by every male student in their school, Bunso persuades his Tatay, Kuya, and Diko to join him and form the all-male group to dance to the
tune of Blackpink on Family Day.”

Doggy by Dustin Celestino
Directed by Roobak Valle
“Jane doesn’t like certain sexual positions, especially ‘Doggy.’ For Mark, this peculiarity about his fiancée has always been a source of repressed anger. Mark’s frustrations surface after a game of ‘Never Ever Have I Ever,’ when he learns that Jane was more sexually adventurous with her previous lovers.”

Titser Kit by Jobert Grey Landeza
Directed by Adrienne Vergara
“Patrick gets into trouble in his new school, a totally strange and distant environment from his Lumad origins. Afraid of what punishment the Principal might sanction him with, he hides inside a dilapidated storage room. He feels safe. Until Titser Kit finds him there.”

Mayang Bubot sa Tag-Araw by Norman Boquiren
Directed by Mark Mirando
“The painful tale of two young Ayta children whose friendship is tested as they choose different paths. One follows her mother as she seeks the American dream, never thinking of who is hurt along the way. The
other remains with their people, working always against oppression.”

Multiverse by Juliene Mendoza
Directed by Fitz Edward Bitana
“Peter a writer, is making up for lost time whith his young brother Bobby. Bobby a recovering alcoholic who just had a 2nd chance at life. They both try to reconnect through their mutual love of comic book. As they discuss the concept of alternate realities and dimensions prevalent in most comic book stories. They imagine how much better their relationship would have been in another reality. As Peter invited Bobby to watch a play he had written a different reality slowly reveals itself to the two estranged siblings.”

Gin Bilog by Luis Nario
Directed by James Harvey Estrada
“Old issues are rehashed in a drinking session of family and friends.”

Dapithapon by Jay Crisostomo
Directed by Sig Pecho
“Dapithapon takes three boys at the end of their High School years and forces them to confront their greatest fears in a single day: flunking out of school, impossible parental expectations, and an unhealthy infatuation with a teacher. They fervently cling to one another, afraid to let go. They try fruitlessly to preserve their friendship before they are forever parted by circumstance.”

Paano Turuan ang Babae na Humawak ng Baril by Daryl Pasion
Directed by Erika Estacio
“Returning home from an encounter against the NPA, Oka reunites with his pregnant wife, Liling. The sweet homecoming turns out to be the complete opposite when Liling is confronted with her husband’s impossible request.”

Posted by Cultural Center of the Philippines on Saturday, May 2, 2020

On the other hand, the revisited works category includes Fangirl by Herlyn Alegre and director Charles Yee; Anak Ka Ng by U Z Eliserio and Maynard Manansala; and Wanted: Male Boarders by Rick Patriarca and George De Jesus III.

The staged readings will feature Jenny Li by Buch Dacanay and Nour Hooshmand; Dominador Gonzales-National Artist by Dingdong Novenario
and Bunny Cadag; Lady Masters by Rouchelle Dinglasan and Joy Cerro; Matira Ang Matibay By Bernice Dacara and Alon Segara; Bagahe by Nicko de Guzman and Joel Saracho; and Mongoloida’s Casa de Pun by Claro Delos Reyes and Guelan Luarca. You can read their synopses here. Ticket/donation information is yet to be announced for the plays.

For aspiring writers and playwrights, you can also check out the VLF Playwrights Fair where Filipino writers will talk about how to effectively market their products and services in writing. It is free and open to the public. It will be held online every 7PM during the VLF 2020.

You can check out the full schedule of the whole festival here.