What if something you think doesn’t exist, thinks you don’t exist?

What if something you think doesn’t exist, thinks you don’t exist?

What if the giant yetis of legend are real and the stories we tell about them—with their thick wild hair, booming roars and enormous feet—are like the tall tales they tell about us…but with a twist.  To them, we’re strangely hairless little beasts with screechy voices and freakishly small feet.  And entirely imaginary.  That is, until one yeti sees a human with his own eyes and becomes a believer.

That’s the big idea behind Warner Animation Group’s “Smallfoot,” a joyful, laugh-out-loud, family-sized adventure set in a dazzling snowbound world above the clouds, that starts when a man named Percy comes face to face—or face-to-knee—with a yeti named Migo. This astonishing encounter sends them both on an unexpected journey of discovery that will open their hearts, challenge old ways of thinking and show them there’s more to life than they ever thought possible. 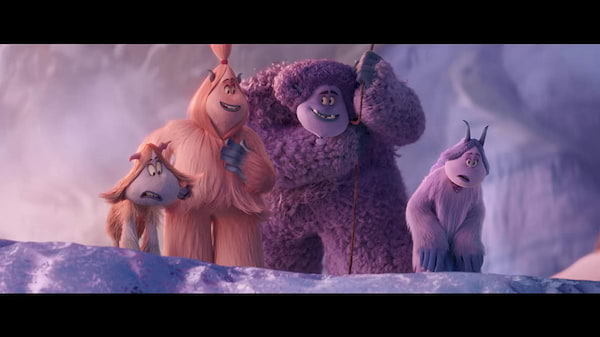 Shocked at first, even frightened, Migo and Percy are soon delighted to have found each other.  For Migo, capturing a “smallfoot” will be the greatest and most important thing he’s ever done, and he can hardly wait to tell everyone in his village about it.  If only he can get his tiny prize home in one piece.  For Percy, a down-on-his-luck animal TV show host, evidence of an actual yeti could put him one viral video away from the fame and glory he craves, and he’s determined to capitalize on this good fortune.  Even if it’s the last thing he ever does.

“Smallfoot” began with the inspiration its filmmakers drew from a concept presented by Sergio Pablos, one of the film’s executive producers and a veteran animator himself.  Producing partners Glenn Ficarra and John Requa, who also share story credit, explain. “The idea was about a yeti finding and interacting with a human, and that seemed so right for a movie,” says Requa.  “Then Glenn suggested: what if we flip it on its head, where the yetis were the ones who believed humans were a myth?  And that became the genesis of our story.”  With that, audiences could experience the encounter from both points of view, offering what Requa calls “an opportunity to see that what divides us is often just the unwillingness to see the other side, and not see each other for who we really are.”

“But the heart of the tale is about these two becoming friends,” Ficarra adds. “For all the slapstick comedy and the fun, their friendship remains the emotional through-line of the piece.”

Channing Tatum Pays the Yeti Who Discovers Man in "Smallfoot"

“Our yetis are nice,” Karey Kirkpatrick, director of the yeti-meets-man comedy adventure “Smallfoot” wants to be clear.

Warner Bros. Pictures has just released a featurette of the cast of “Smallfoot” greeting and inviting Filipino fans to watch the new comedy adventure.

An animated adventure for all ages, with original music and an all-star cast, “Smallfoot” turns the Bigfoot legend upside down when a bright young Yeti finds something he thought didn’t exist—a human.

Not every legend is a tall tale.

An animated adventure for all ages, with original music and an all-star cast, “Smallfoot” turns the Bigfoot legend upside down when a bright young Yeti finds something he thought didn’t exist—a human.

WATCH: Yeti or Not, Here Comes the 'Smallfoot' Teaser Trailer