For all its magic and wonder, ‘The Nutcracker and the Four Realms’ reads incredibly thin.

The first strange thing is that this is essentially a Christmas story, but its pre-Halloween release sends frighteningly wrong signals about how Disney feels this film will do in December, which would have been more apt. It’s almost as if Disney knew that they didn’t have a solid project on their hands and shipped it off early, hoping people would take to the Christmas tale in lieu of being scared with all the horror releases coming up. It’s a good marketing ploy, if you think about it, but it doesn’t say much about the film as a whole.

And for a film entitled ‘The Nutcracker and the Four Realms,’ the story is not about the titular Nutcracker but a young girl, Cara, who discovers a magical world where her deceased mother was a queen. The Nutcracker, who is named Captain Philip, is not even a lead character and plays off as a weak support for Cara and he is overshadowed by the other beings in this magical world, most specifically Keira Knightley, who I will talk more in detail later. 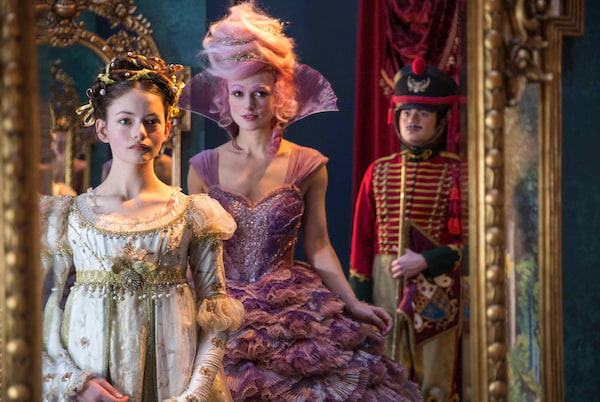 And while this reimagining of the famous Christmas story has been updated for a more contemporary mindset — a strong message of female empowerment and a diverse cast including a black Nutcracker, and Cara’s godfather being played by an elegantly bedraggled Morgan Freeman — it comes off more as jarring as the diversity feels forced rather than sublime. There is a distinct old-world feel, even though the time frame is never really set, but the technology and the customs harken to days the Edwardian era or even older (Morgan Freeman’s Uncle Dresselmeyer doesn’t seem to fit into this world). I appreciate the intention, I don’t agree with the execution.

And for all its magic and wonder, ‘The Nutcracker and the Four Realms’ reads incredibly thin. Cara and her family are feeling the loss of her mother and it bodes as a sad Christmas. But when she receives a final gift, an ornate metal egg with a lock, she searches for the key that leads her to a magical world where she discovers she is a princess and she must save the four realms from an impending war.

The connection between Cara’s strained relationship with her father in the real world bares very little emotional connection to this secret world of her mother. The lessons she learns in her adventures in the said four realms are earned easily, and the challenges lack any real tension or struggle. 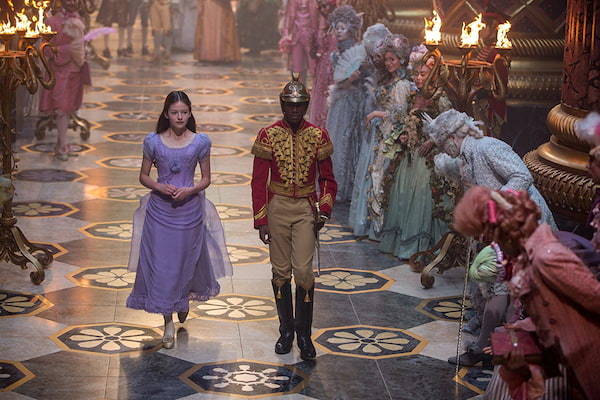 But maybe I’m not the right market for this movie. This is a movie geared towards children and as an adult, I am looking for more depth or layers. Kids are going to love the mice and the idea of toys coming to life, but this is not one of those films that can be enjoyed by both children and their adult companions together.

And the production design of ‘The Nutcracker and the Four Realms’ is so busy and kitschy and, to coin a term of the progressive younger generation, so very extra. Everything is so abundantly ornate and detailed that it draws so much attention. There’s no moment for your eyes to rest, and it’s distracting.

The film’s saving grace is its message of empowerment to younger women. Cara is not just a strong young woman but she’s a mechanic and a scientist, which is not new, but something that needs to be enforced. The film also gives us a Keira Knightley performance that is unlike anything we’ve ever seen her in before. 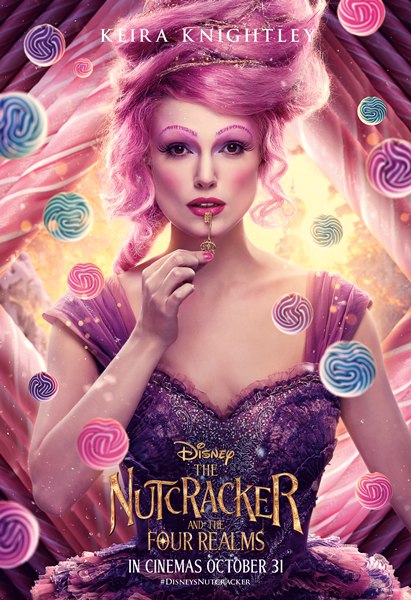 As one of the regents of the Four Realms, Keira Knightley’s Sugarplum is frenetic, overly-bubbly, and surprising. It’s out of character for Knightley, which makes it enjoyable, but there is more to it than that, and when she reveals more and more of her character, we see glimpses of her incredible range. She steals the scenes from the lovely Mackenzie Foy’s Cara and even a rough-and-tumble Helen Mirren.

Even as a children’s film, I feel that ‘The Nutcracker and the Four Realms’ is a little overboard and maybe that’s why it was thrown into the Halloween season instead of the more appropriate Christmas season slate and if it does well, it’s because kids can’t watch most of the horror films that dominate the cinemas.

The Nutcracker and the Four Realms

Disney weaves magic onto the timeless story by expanding it into a universe, no expense spared to give the audience four spectacular worlds. Step inside the beautiful world of 'The Nutcracker and the Four Realms' and have look at its four realms.

Mackenzie Foy is Clara in "The Nutcracker and the Four Realms"

Disney's "The Nutcracker and the Four Realms" Unveils Character Posters

Check out the newly released character posters below from Walt Disney Pictures' upcoming fantasy adventure The Nutcracker and the Four Realms and watch the film in Philippine cinemas October 31.

The legend you know has a dark side. Watch the final trailer of Walt Disney Pictures' new fantasy adventure The Nutcracker and the Four Realms.

Experience the magic and uncover the mystery in Walt Disney Pictures' new fantasy adventure The Nutcracker and the Four Realms.

inspired by the classic tale ' The Nutcracker and the Mouse King' and 'The Nutcracker' ballet, the film will open in theaters on October 2018 and will star Keira Knightley, Mackenzie Foy, Helen Mirren, and Morgan Freeman.

PrevPreviousHere are All the Filipino Films Streaming on Netflix Soon
NextWeekender Guide: November 2, 3, and 4, 2018Next