A lack of focus makes the film just go through the motions rather than giving us real meat to chew on. Fortunately, Rami Malek’s performance is so good, it distracts us from what the film fails to deliver in terms of showing us who Freddie Mercury is.

Less of a biopic and more just a celebration of the life and music of the superstar rockband Queen, 'Bohemian Rhapsody' only succeeds primarily on the strength of Rami Malek’s transformative portrayal of Queen frontman Freddie Mercury and the band’s superb music and legacy. A quick peek online shows that the film takes a lot of narrative liberties with the details of Queen’s story, sometimes creating drama that isn’t true.

Many films about real people take dramatic licences to make the story translate onscreen. Films like ‘Hidden Figures’ mix and match the experiences of the amazing black women in NASA to different characters to help tell a more solid narrative experience, but the soul and the essential experience still remains true.

As powerful as the narrative presented by ‘Bohemian Rhapsody,’ about the rise of the 70s rock band Queen into international superstardom and the tragic death of its captivating lead singer Freddie Mercury to complications due to AIDS, they created a story point for dramatic purposes that never really occurred, and it feels unnecessarily manipulative in the process. 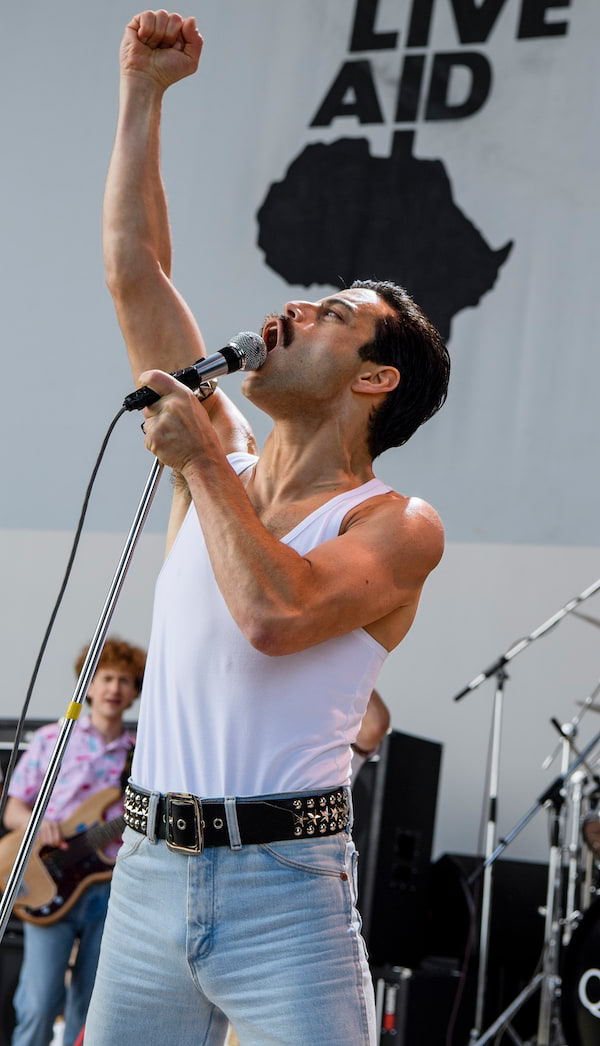 The film’s culmination leads towards their iconic 1985 Live Aid Performance, but the film suggests that the band had broken up at this point when, in truth, they didn’t. It suggests that Freddie Mercury was already diagnosed at this time with HIV but he wasn’t diagnosed until after this said event. It feels disingenuous to create this sense of drama for the purpose of this movie when the band and their music alone is enough to keep you on your seats.

Because that’s where ‘Bohemian Rhapsody’ still manages to inspire and sparkle. Queen, as a rock band, created so many magnificent songs that haven’t aged a single bit and it’s when the movie delves into the creation of these songs and the struggle they had to getting their songs played on the radio where the movie actually shines. In fact, there should be more of this.

As a biopic, they offer nothing really new to the story of Queen that we can’t find on our own. The film takes shortcuts to present them as the musical geniuses that they are without showing us where the genius comes from. Director Bryan Singer (and David Fletcher, who finished shooting the movie after Singer was fired two weeks before production ended), seemed more inclined to show us the product of the genius rather than the heart of it.

That’s what is sorely missing from ‘Bohemian Rhapsody.’ There are strong elements of the band being a family and also an important element of Freddie Mercury and his wife, Mary Austin, whom he calls ‘the love of his life,’ but the film fails to dramatize what makes Queen a family and why Mary is so integral to Freddie’s being. These are things that are said constantly but are never really explored by the narrative.

This lack of focus makes the film just go through the motions rather than giving us any real meat to chew on. Fortunately, Rami Malek’s performance is so good, it distracts us from what the film fails to deliver in terms of showing us who Freddie Mercury is. There is a line in the film when the road manager, Paul Prenter, tells Freddie, “I know you, Freddie” and Mercury responds with something like, “You don’t know me; you only see what you want to see.”

This seems more apt for the film’s portrayal than anything else.

But other than Malek’s incredible performance (actually, everyone is quite good in this movie, it’s just that Malek’s larger-than-life portrayal really steals the show), it is the band themselves, Queen, and their music that makes this film so enjoyable. The last twenty minutes of the film — the band in its full glory — is a marvel of taking these powerful songs, Mercury’s onstage charisma, and this one singular moment of rock history and turning it into a triumphant finale that will leave everyone breathless.

Now if only the rest of the film would have been given as much care as Malek’s performance and that finale.

It’s been over 25 years since the death of lead singer and flamboyant front Freddie Mercury, yet the music lives on.

The newest trailer to the Queen biopic Bohemian Rhapsody has dropped yesterday, and we can't be any more excited and ready for the film to come to cinemas!

WATCH: The Trailer to the Queen Biopic, 'Bohemian Rhapsody'

Everyone who's ever loved Queen will surely have their heads bopping and feet stomping in excitement to this new trailer!

Coming to life soon on the big screen is the story of the phenomenal and iconic British rock band Queen in “Bohemian Rhapsody” starring Rami Malek, directed by Bryan Singer and produced by Graham King.
0