John C. Reilly is Back to “Break the Internet” in “Wreck-It Ralph 2”

In Walt Disney Animation Studios’ much-anticipated sequel Ralph Breaks the Internet: Wreck-It Ralph 2, actor John C. Reilly steps back into the character of Ralph, the ham-fisted video-game bad guy with a heart. And despite the six-year difference between the original and the sequel, getting back into it was a piece of cake for the 53-year-old comedian. 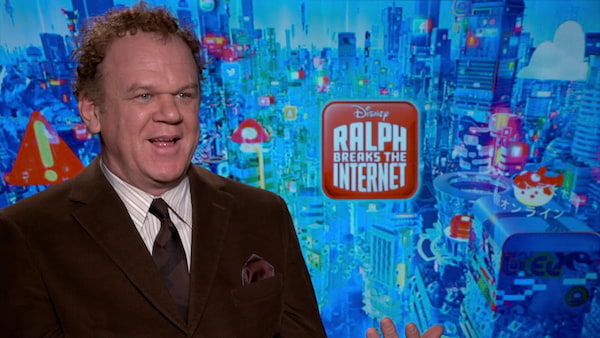 “It clicked pretty fast,” says Reilly, who reunited with several cast members and filmmakers from the first film. “There’s a level of comfort there. We found the fun and mischievousness from the get-go.”

When the sequel begins, things are going well in the arcade—Ralph and Vanellope (voiced by Sarah Silverman) happily complete their duties in their games during the day and hang out together in their neighboring arcade games at night. Ralph treasures their friendship and will do anything to help his buddy—but his efforts don’t always turn out like he hopes. So when Vanellope’s game is busted due to his heavy-handed attempt to liven things up for her, Ralph takes it upon himself to track down the broken part—even though it means venturing to a scary new world called the internet. “Ralph doesn’t always make the best decisions,” says co-director Rich Moore. “He tends to be his own worst enemy. If anyone should carelessly find himself in the shady part of the internet—the deep web—it’ll be Ralph. He might be there for the right reasons, but we all know he’s bound to screw things up.”

“Ralph is a childlike character,” says Reilly, whose film credits include Chicago (for which he was nominated for a Best Supporting Actor Academy Award), Walk Hard: The Dewey Cox Story, Kong: Skull Island, and Guardians of the Galaxy. “He’s unaware of the outside world. So in coming back to the character, it was important to remember his naivete and his innocence.”

“John is the best,” says co-director Phil Johnston. “Everything is honest. Everything he brings to the character is real. If he doesn’t feel it, he doesn’t do it. But that means that whatever he

brings is going to be great. There’s a lot of John in Ralph.”

Join the conversation online and use the hashtag #RalphBreaksTheInternet

Vanellope Meets the Disney Princesses in "Ralph Breaks the Internet"

Q&A with Josie Trinidad, Head of Story of Disney's 'Ralph Breaks the Internet'