For all its surprising turns, ‘Widows’ becomes a showcase of women’s strength, determination, practicality, and ingenuity.

There are two intertwining movies at the core of director Steve McQueen’s ‘Widows.’ It’s one part a heist movie, a crime film that is unafraid to be brutal and explosive as the tone is set from its very first scene with a caper that goes horribly wrong which sets the movie’s narrative into motion. The other part is an emotionally heavy drama with deep feminist tones as it explores the character arcs of four women who are dealing with the loss of the men in their lives and the trouble they find themselves in because of the actions of their husbands.

Because Veronica (Viola Davis), Linda (Michelle Rodriguez), Alice (Elizabeth Debicki), and Amanda (Carrie Coon) are all the widows of a band of criminals who perish at the opening scene caper. The man they stole from, Jamal Manning (Brian Tyree Henry) is running for office and wants his money back and threatens Veronica, whose husband Harry (Liam Neeson) is the mastermind of the robbery, to return the amount that was stolen. 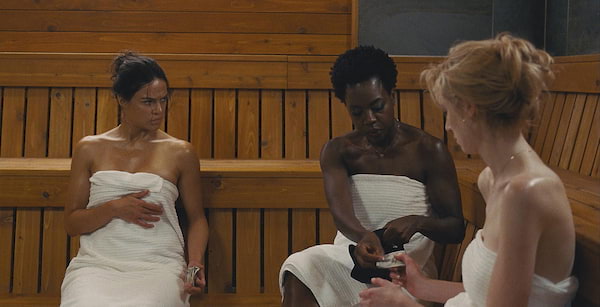 With no other choice left to her, Veronica must use Harry’s notebook, which has all of his notes and plans for heists in the past and the future, to mount her own robbery with the help of the other widows, whose lives are upended by the loss of their husbands.

‘Widows’ is a complex narrative with so many moving parts and full of emotional highpoints in its 129-minute running time. Veronica has to get her crew together and prepare for the crime but each of the women must evolve and change to meet the demands that are asked of them. As this is all unfolding, the upcoming election creates a sense of urgency as Jamal Manning is up against incumbent Jack Mulligan (Colin Farrell), who has ties with Harry somehow, which somehow figures into the heist Veronica is planning. 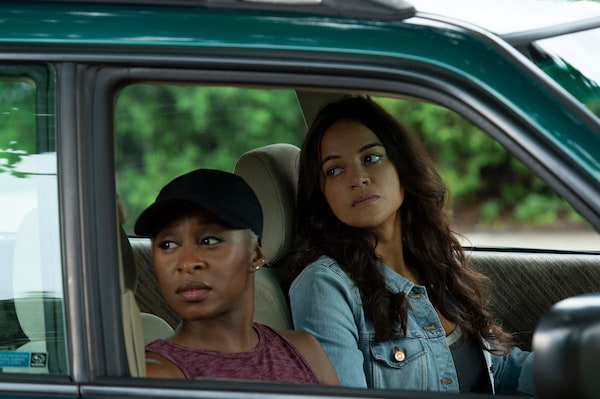 At front and center is the story of women whose lives were turned topsy-turvy by the men in their lives and discovering that the solution to their problems is in each other and in themselves.

But these women are not all victims. Each character shows a different side of a similar coin. Veronica is presented more as an equal with a darker history in her relationship with Harry that creates a far more complex story tucked away in Viola Davis’ moments of grief and loss that are peppered throughout the film. She straddles both anger and loss, resentment and grief in every emotionally charged scene. This is a role that is made for her incredible range and onscreen power.

Rodrigues’ Linda is a business woman in her own right while Elizabeth Debicki’s Alice falls closer to the stereotypical doe-eyed, beautiful victim of an implied abusive husband. It’s her character’s growth that is the most engaging in the film and the incredible Debicki is captivating filling Alice with a growing sense of confidence. On the opposite end, Carrie Coon’s Amanda seems the most practical as she wants nothing to do with her husband’s line of work, which brings in a standout supporting turn by Cynthia Erivo’s Belle, Linda’s babysitter, who ends up joining the group.

Erivo’s Belle is the least developed of these characters but it is an eye-catching performance and display of physicality that seems to help round out the various displays of women’s strength. 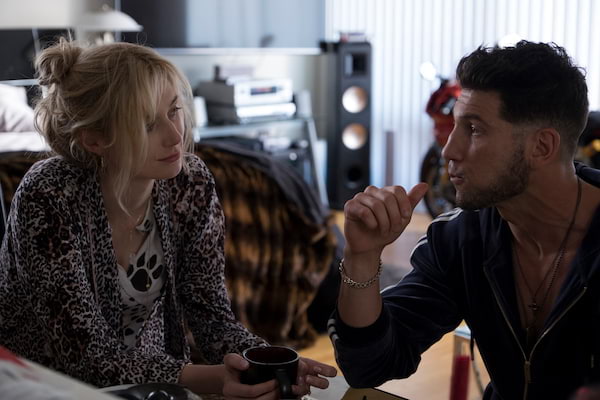 For all its surprising turns, ‘Widows’ becomes a showcase of women’s strength, determination, practicality, and ingenuity. The men, who have all the power, are portrayed smug and dismissive. The women have their back against the walls but they are decisive and tireless. They manage their grief with the rigorous demands of the work ahead of them. It fuels them and drives them forward while the men’s emotional states hinders them, confuses them, and gets in the way.

There are moments in the film where it can get unbelievable and unrealistic, especially in terms of coincidences and lucky breaks, but it’s definitely hard-hitting, brutal, and merciless. Much like the other Steve McQueen movies I’ve seen, it’s relentless in its emotional weight. ‘Widows’ builds the tension steadily but there are brief moments that are funny but very few. This film takes it story and the large bag of feelings that come with it very seriously and it can be very breathtaking if you let it all in.

Widows, slated to premiere in PH cinemas on December 5, will also hold previews in selected cinemas today and tomorrow, November 27.

"Widows" Sneak Previews on November 26 and 27

20th Century Fox’s “Widows” will have sneak previews nationwide on November 26 and 27.

“Widows” takes the audience into the ruthless criminal world where the most vulnerable and overlooked people were women, deemed incapable of anything other than being judged by their appearances.

Four women take matters into their own hands when their husbands unexpectedly perished with unfinished criminal activities in “Widows”.