Like a Modern Fairy Tale, ‘Ulan’ Juggles the Mundane and the Magical

While Carlo Aquino has always been a consistent in giving such nuanced performances, ‘Ulan’ is Nadine Lustre’s movie through and through.

It takes a long while for Irene Villamor’s ‘Ulan’ to set up all its pieces in place — a slow burn of a movie that exists somewhere between fantasy and the real, in the realm between memory and the present — but once the setting and the backstory of each character is properly established, the movie takes flight.

It is an unconventional love story, the journey of a young editorial assistant named Maya (Nadine Lustre), who after several heartbreaks has sworn off of love until she meets Peter (Carlo Aquino) while she is struggling with her umbrella and the artworks from her work in the pouring rain.

The narrative is a complex one as it jumps back and forth from memories of Maya’s childhood to her adult self. This jumping back and forth creates a dialogue between all of the things that she believes in about life and love. As a child, she is made to believe in superstitions, folklore, and Philippine lower mythology. As a young girl, she asks her grandmother why sometimes the sun still shines when it rains, her lola responds saying that tikbalangs are getting married and it rains because their love is forbidden; that tikbalangs are not allowed to love.

But, as a child, Maya walks out in the rain, into the forest of her provincial hometown and becomes witness to a tikbalang wedding and is told by the bride and groom that no love is ever wrong and that true love always wins no matter who goes against it.

As a grown up, Maya has grown cynical as her heart has been stomped on over and over again. As the narrative unfolds, we see a young woman grasping unto real world things — her work, the people around her, her living conditions — while her inner world and her past is filled with longing for fantasy and romance.

As the film continues to jump from her flashback of her childhood that is filled with mystical and magical elements of whimsy and wonder to her real-world problems of her adult life, we start to see a connection between the two even if it is still outside of Maya’s reach.

So does Peter’s arrival signal a triumph for her childhood dreams or her more practical, adult self?

And in this answer comes a surprising meditation on the power of wonder, and childlike innocence. Director and writer Irene Villamor creates a modern day fairytale that highlights the importance of our capacity for dreams and fantasy. ‘Ulan’ feels like a testimony to embrace our madness and our belief in mystical moments and coincidences. With the juxtaposition of Maya’s memories and her current state and the winding and interweaving narrative elements of the story, the movie attempts to portray the necessity of our childhood belief in magic if we want to truly love and to truly survive the rigours of this world.

For love and pain come hand-in-hand. It is inevitable.

This is such a whimsical world that is further amplified by its clunky special effects and unpolished depiction of the tikbalangs that it creates a hyper-reality that the narrative can really sink its teeth in this story. This lack of polish works to the film’s advantage — reflection of the innocence that is constantly trying to push itself into the foreground as Maya constantly tries to grow up and refrains from childhood beliefs.

The film attempts to ground Maya’s character in the real world with her multitude of transportation commutes — from jeeps to tricycles — just to get to her work in Manila from her home in the province while depicting her love stories as outrageous romances such as the extravagant first world luxuries of one of her bourgeois love interest Andrew (Marco Gumabao) complete with a Western period costume drama ballroom dance moment at a lavish wedding.

The film vacillates between something very real to something very outrageous, intensified by magnificent cinematography, that manages to turn love into this malleable thing that always seems out of Maya’s reach. It is something that neither exists fully in her attempts to belong in a real, practical world or even as a child in all its magical realism wonder.

And while Carlo Aquino has always been a consistent in giving such nuanced performances, ‘Ulan’ is Nadine Lustre’s movie through and through. She gives a wonderfully measured performance that allows her to shift along with the film’s transitions to its many different genres. She is never swallowed by the whimsy nor the dramatic elements of the film, resisting any impulse to go for the cute factor. Instead, she plays Maya’s conflict with cynicism and romance and delivers a character that can be unsympathetic at times but also familiar.

This is a character we know too well: someone who is struggling with the notion that all your childhood beliefs aren’t true and just as if all the belief is pushed out by life, something magical happens to start that fire of faith all over again.

With gorgeous arresting visuals, an unconventional and quirky storyline, and magnificent performances by Nadine Lustre and Carlo Aquino, Irene Villamor’s ‘Ulan’ is a wonderful meditation on why it is so important to believe in magic, in holding on to our childlike innocence and wonder, and why it’s so important to not be afraid to dance in the rain. 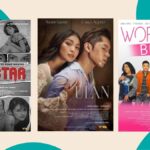 This month, PBO is screening movies with stars such as Nadine Lustre, Maricel Soriano, AJ Raval, and more!