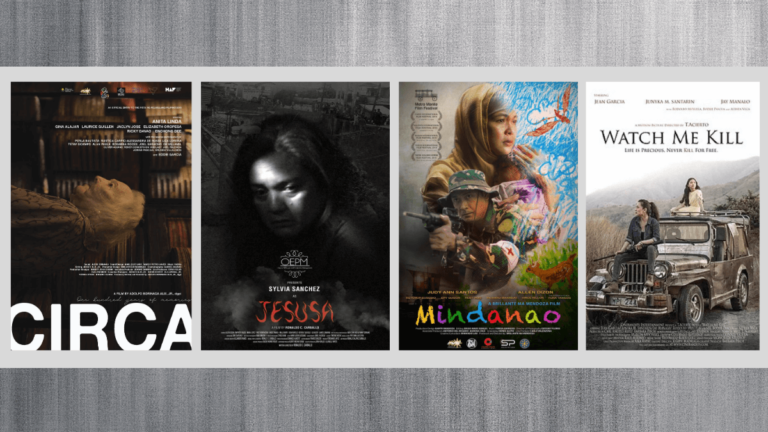 While Cinemalaya 16 goes online on the Vimeo platform on August 7-16 with the spotlight on the short film genre, the festival’s Indie Nation section will feature four full length feature films.

These are Mindanao by Brillante Mendoza; Watch Me Kill by Tyrone Acierto; Jesusa by Ronald Carballos; and CIRCA by Adolf Alix.

In Mendoza’s Mindanao Muslim woman Saima spends the final days of her sickly daughter AISA at the House of Hope, a temporary home for children with cancer in Davao City.  While there, she awaits her husband Malang, a combat medic, to come home from an offensive operation in the province of Maguindanao.  Saima witnesses how other patients have triumphed over cancer while some did not.  Malang witnesses how death awaits on the battlefield as he tries to save the wounded soldiers…some survived, some did not. Saima mirrors the harrowing life in Mindanao by retelling the epic tale of Rajah and Sulayman.  Judy Ann Santos plays the lead role in the film.

In Acierto’s Watch Me Kill, a ruthless assassin’s plan is interrupted when she discovers that the man she needs to kill has more to hide than expected. Her life unravels as she must juggle her new priorities with her inner demons. Set in a world where violence rules over virtue, she must face the hardest reality — is she the real danger or the monsters that control the criminal underworld? Jean Garcia essays the assassin’s role.

Carballos’s Jesusa is the story of a barren woman driven to her wit’s end when her philandering husband moves in with his latest mistress.  Left only with her stepdaughters, she succumbs to the sordid ways of the neighborhood drug addicts.  Sylvia Sanchez is Jesusa.

The late actress Anita Linda is Doña Atang, in Alix’s Circa, a once celebrated film producer from the earlier years of Filipino cinema, celebrates her one hundredth birthday.  For her wish, she wants a reunion with all the actors and staff that she has worked with in the past.  She is also looking for an unfinished film from one of her directors.  Her grandson Michael decides to take the task of finding them.  As he does, we remember the glorious years of cinema from its workers- fragments of a colorful past filled with faded memories.  Will it remain as part of the past?  The film boasts of a stellar cast that includes Jaclyn Jose, Gina Alajar and Laurice Guillen.

Due to the COVID-19 pandemic, the 16th edition of Cinemalaya migrates to online platform, via Vimeo.  Cinemalaya Philippine Independent Film Festival is a project of the Cultural Center of the Philippines and the Cinemalaya Foundation, Inc.  Established in 2005, Cinemalaya is an all-digital film festival and competition that aims to discover, encourage and honor cinematic works of Filipino filmmakers.

For more information, visit www.cinemalaya.org or www.culturalcenter.gov.ph.  You may also call CCP Media Arts at 8832-1125 local 1704 to 1705 and the CCP Box Office at 8832-3704.  Or follow the official CCP and Cinemalaya Facebook and Instagram accounts.