Even Toys Grow Up: A Review of ‘Toy Story 4’

‘Toy Story 4’ is equal parts a coming-of-age story, a wacky and zany adventure, and an exploration of existential themes about your life’s purpose and finding your place in the world.

It’s been 24 years since ‘Toy Story,’ but Pixar and Disney are still making magic out of stories featuring Woody and Buzz Lightyear. In those 24 years, Woody and Buzz’s story has grown and matured alongside the audiences that fell in love with them as children all those many years ago; without losing any of the wonder and fun and whimsy that makes the Toy Story franchise so appealing to children. 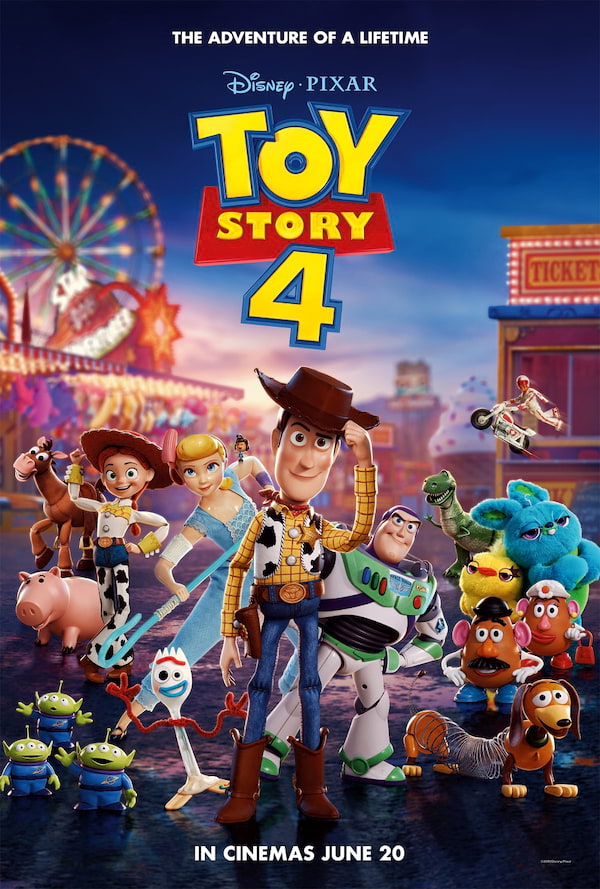 But from the cold open of ‘Toy Story 4’ — a flashback that sets the mood and atmosphere of what’s to come in the film — we can see how far advanced the technology has come that the CGI animation is so vivid and realistic that even the look and feel has grown up and mature as the narrative that follows.

Now that Woody and the gang are now Bonnie’s toys, Woody is no longer the leader of Bonnie’s playground, and this serves to push Woody even harder to try his best to be there for Bonnie, especially since she’s about to enter kindergarten. His experience from being Andy’s favorite toy becomes his motivation to ensure that Bonnie will feel safe in this new environment. While the rest of the toys are happy to do their part in Bonnie’s room, Woody disobeys the rules and joins her in kindergarten where he has a hand in the creation of Forky, Bonnie’s self-made toy from craft materials and a spork.

Forky becomes Bonnie’s new favorite toy but Forky doesn’t know what that means and over the rest of the film, Woody has to educate Forky about the powerful responsibility that rests on the shoulders of a child’s toy. But Forky is not a quick study, and when Woody and Forky are separated from Bonnie during a road trip, they embark on a marvelous journey that leads them to new toys and old friends, and a powerful message about growing up, letting go, and what it means to be there for someone.

‘Toy Story 4’ is equal parts a coming-of-age story, a wacky and zany adventure, and an exploration of existential themes about your life’s purpose and finding your place in the world.

It’s wonderfully mature and adult yet, it’s still fun and funny that the cinema was a diverse crowd of children, teens, young adults, grown-ups, and parents, and everyone was laughing and crying at the same time. While it is still an animated feature, there are creepy and frightening moments that are tempered with touching and tender moments that will really grip your heart, and moments of pure comedy that will leave you in stitches.

While Tim Allen takes a backseat as Buzz Lightyear, Tom Hanks is in fine, fine form bringing Woody to life with his familiar voice that manages to express the myriad of thoughts and emotions that are running through Woody’s head in this great adventure, maybe even his greatest. Tony Hale as Forky is a wonderful foil because while his story is very similar to Buzz in ‘Toy Story’ — as a toy who doesn’t realize he’s a toy — what he lacks in Buzz Lightyear’s bravado and confidence, he makes up with a nihilistic realism that feels fresh and new.

‘Toy Story 4’ has so many twists and turns that it touches upon so many powerful themes. It’s a work of art how they have kept these characters from feeling old or tired. Growing up with these characters, they feel as fresh and brand new as they did when I first saw them as a teen in 1995 with ‘Toy Story’ and their challenges have echoed my own.

The Toy Story franchise has only gotten better with each movie that has come along, and it’s hard to think of many franchises that manage to grow and improve as such. When they made “To infinity and beyond” a catchphrase 24 years ago, who knew that they were also talking about these characters and what they had in store for them?

Here's your first look at Bo Peep (and her new look!) as she returns to the big screen in the highly anticipated Disney-Pixar sequel that opens in cinemas June 2019. Watch the latest clip from 'Toy Story 4' here!

WATCH: The First Teaser Trailer to 'Toy Story 4', Opening in Cinemas Next Year!

Eight years since the last Toy Story film premiered, and since Woody and the rest of gang was given away to Bonnie, Disney has finally given us a quick glimpse to the upcoming Toy Story 4, set to open in cinemas in June 2019!