With Constance Wu and Jennifer Lopez leading a solid cast that includes Julia Stiles, Keke Palmer and Lili Reinhart, we are brought into the world of monetizing sexuality.

Based on the New York Magazine article ‘The Hustlers at Scores’ by Jessica Pressler, ‘Hustlers’ is based on the true story of a gang of strippers who take to drugging and robbing clients — primarily Wall Street stock brokers and CEOs — after the stock market crash in 2008. In the hands of writer and director Lorene Scafaria, what could have turned into a sleazy excuse to sexualize women becomes a rather fascinating study of two women and the bond they share as they go through similar challenges in life.

With Constance Wu and Jennifer Lopez leading a solid cast that includes Julia Stiles, Keke Palmer and Lili Reinhart, we are brought into the world of monetizing sexuality. At the beginning of the movie, we see Constance Wu’s Destiny on her first night in the strip club. She’s awkward with the other women backstage and still feeling her way around her new workplace environment. We are shown a quick montage of the work involved and immediately, it is presented as work. There is no glamorizing the act. It’s work. It’s meant to arouse or titillate but it’s not shot nor covered in any shape or form as such.

It clearly defines what this is from the get-go. This pays the rent. This will help Destiny pay her grandmother’s debts.

And then she meets Jennifer Lopez’s Ramona, who enters with a fabulous solo pole dance performance set to Fiona Apple’s ‘Criminal.’ Unlike the first montage, this scene is lit for full effect and is sure to capture all of Jennifer Lopez’s best features and incredible skills. When we meet her, Ramona is Destiny’s opposite. She knows what she’s doing, understands that it’s work so she’s perfected it to the point that she can get men to put out as much money as they could part with just to be near her. 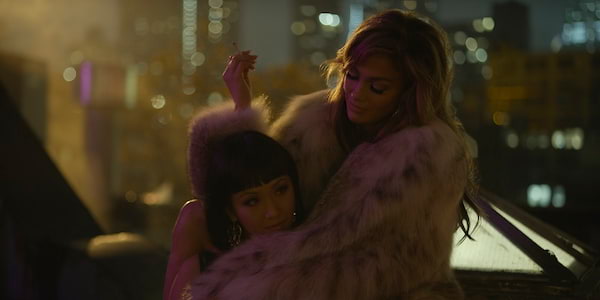 So when Destiny introduces her to Ramona during their break, there’s a spark of recognition and as both girls share Ramona’s lavish fur coat to keep warm, a bond is created that propels the story further into the unbelievable tale that follows.

Framing this tale is the discovery that this is all a recollection as Destiny is recounting the events of 2007 in an interview with Julia Stiles’ Elizabeth, a reporter who is trying to piece together the story that we are about to experience.

The framing of the story, as a narration of Destiny to Elizabeth, allows our main character full control of her narrative and can properly comment on the circumstances that lead the women to drug and rob their clients. It’s a lot more straightforward than I would prefer but this technique allows us to completely root and cheer for these women because Wu’s portrayal of Destiny is so complete and whole that we see a woman who felt she had no other option and made sure that they did as little harm as possible.

Because while the film underscores the horrible ways with which certain men use and sexualize women, it also highlights the economic and political system that allows some people in the finance sector to get away with so much, lose it all (including the money of their clients), and get away scott free. The film does not excuse what these women did but when you line up all the characters of ‘Hustlers,’ you’d find that the women of the film have reasons we all can empathize with that can explain their actions. Many of their victims? Not so much. 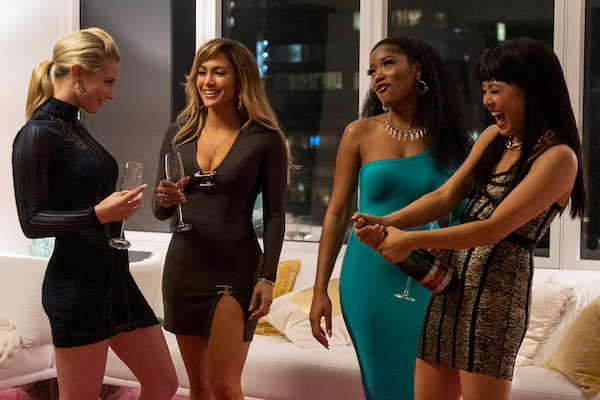 So it’s the political underbelly of this film that really elevates this crime/comedy from just being a movie about strippers. Another feather on its cap is the wonderful performances from the cast, most especially Constance Wu and Jennifer Lopez, who gives such confident and nuanced portrayals of Destiny and Ramona.

They hint at the extent of their friendship, which manages to surprise the audience at every turn. It never veers towards cliche and while they verbalize their feelings, you know there is more there that is kept away from the audience and that we can only infer but how they deal with each other.

Yes, it’s funny. Yes, it’s got great performances and, yes, the story in itself is more amazing knowing that it’s based on a true story, but the most fulfilling thing about the film is how it is so informed by the politics that revolves around the story. It is not unaware yet it isn’t preachy or obnoxious about it.

Find showtimes for 'Hustlers' and book your tickets today!

Malaysia Bans 'Hustlers,' Will Be Screening R-16 in PH

'Hustlers' may have been stripped off from Malaysian theaters, but the J. Lo film that charmed critics is coming to the Philippines!

WATCH: The Ladies of 'Hustlers' Get To Work in the Film's New Trailer

A few days before Hustlers premieres in Philippine cinemas, fans eagerly waiting for the film are treated with a new trailer which shows the star-studded cast getting to work, and showing each other how to earn more cash.
0