“The Book Thief” introduces us to a curious little girl by the name of Liesel Meminger played by Sophie Nélisse at the center of Markus Zusak’s novel of the same title.

“The Book Thief” introduces us to a curious little girl by the name of Liesel Meminger played by Sophie Nélisse at the center of Markus Zusak’s novel of the same title.   Liesel has a fascination with books and a desire to amass a collection of her own – pales in comparison to those being committed in the world in which she lives. She can’t possibly understand the tumultuous events happening around her, as war breaks out and she learns that a man named Hitler is responsible for tearing her family apart. 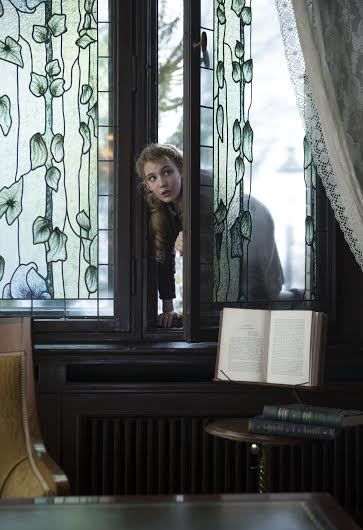 But as her foster father, Hans Hubermann, helps her read the pages of the books she’s so keen to take, and when she finds a friend in the Hubermann’s new basement-dwelling houseguest, Max, life begins to change for Liesel. Even in the darkest of times, the Book Thief learns the power of words, and how they can change the world.

In adapting Zusak’s novel for the big screen, director Brian Percival knew that it would take a special kind of young actress to get to grips with the complex sea of emotions that young Liesel experiences over the course of The Book Thief. He braced for a long search, encompassing thousands of kids from all over the world, in order to find the perfect Liesel. There could be only one out there. 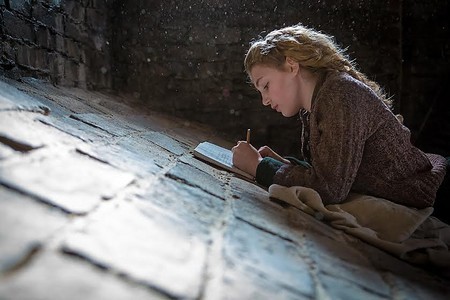 Cast in the roles of Hans and Rosa Hubermann, Liesel’s foster parents, are the highly experienced actors Geoffrey Rush and Emily Watson. Both agree that Nélisse has a natural talent for acting, and marvel at her commitment. “She has incredible discipline,” says Watson. “Her attention span is amazing and she has incredible self-possession. They’re things you really take for granted, but she also has a very instinctual, natural presence. She doesn’t need to be told what to do. She reacts, you see thought in her face, and you can’t fake that.”

Adds Rush, “She’s sparky off-camera, but on-camera she looks almost as if she’s this cool existential philosopher, taking life as it comes. They’re very tiny little threads she plays with, but she has so much subtle, beautiful, engaging stuff going on in her mind. The camera just loves her.”

But for Nélisse, this is a challenge readily accepted and further talks about her role in the following q&a (by Joe Utichi): 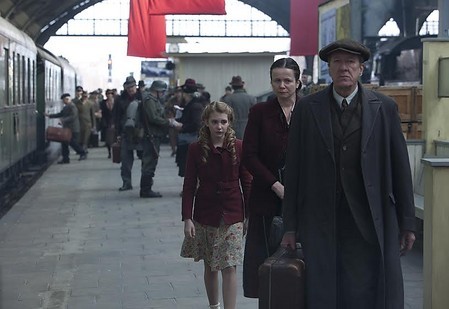 Q: What do you love about playing Liesel?

A: Well, she’s really tough and she’s really fun to play because she goes through a lot of different emotions. At the beginning she was thinking, “I’m a bit scared and a bit intimidated,” and then while the movie goes on she’ll get more tough and courageous. She’s so amazing to play because it’s not just an easy role. It’s interesting to play with.

Q: Do you see any similarities between you and Liesel?

A: She’s a fighter, a bit like me. I won’t really give up when I want something. She’s courageous and she never gives up, which is most like me.

Q: What is it like to work with Emily Watson and Geoffrey Rush?

A: They’re so good because they’re professional and I can learn so much from them. They’re inspiring in how they work, how they act and their preparation beforehand. Sometimes they give me advice, which is really good. It’s so fun to get the chance everyday to be sort of spoiled to be with them.

Q: What kind of film do you think it’s going to be?

A: I think that it’s an inspiring movie, because as much as it’s about the war, it’s not depressing. It is sad because of the fact of what happened, but it is sort of another way to see things in this movie. Words are like life. Liesel learns to read and she survives because of that. That applies to your own life; if you’re having a hard path you can look on the other side of things. And because of words she can see the world in a prettier way.

A: I like books that I like. I mean, you know some people don’t like a book and they’ll just finish it and say, “Okay, it was bad.” But if there’s a bad book I have to read, I’ll think, “This is boring. I won’t read it at all.” If it’s a good book I’ll read it really, really quickly and go, “Okay, I want to read the other one.” If it’s bad it’ll take me like ten years to read it!

Q: What are your favorite books?

A: I really like journals – diary kinds of things, girl stuff. But my bestfriend showed me a book that I liked. At first I didn’t think it’d be my type of thing. It was a mystery/fantasty sort of thing about animals, called FABLEHEAVEN. It’s really good. I really like it and I read all four of them. It’s a big book, but they’re really good so these are my favorites.

Q: What is it about acting that you enjoy?

A: I just love to play a role that’s not mine and to try other things that I never tried before. It’s amazing to go into other characters and to really be like that character.It’s hard – it’s a job – but it’s so fun, and then you can look at yourself and say, “I’ve experienced that,” and it’s fun to do.

Q: Do you watch a lot of films?

A: Yes, films are not like books, so even if they’re boring, and even if the movies are bad, I’ll watch them anyway. I know it’s stupid but I like these little stupid movies. My dad’s like, “Why do you watch these stupid things?” And I’m laughing at myself because I’m watching it, but I really like all movies.

Q: Who are the actors you’d really like to work with?

A: I really like Johnny Depp because I think he’s hilarious in “Pirates of the Caribbean.” Maybe Jessica Chastain, I think she’s good. There are a lot of good actors. Most of the actors I’d like to work with, all of them have so much to give me.

Q: Are you an actor for life now?

A: Yes. Unless people stop liking me and won’t hire me! But as as long as I have an opportunity, I’ll keep going.

An inspiring and moving story, “The Book Thief” will open February 19from 20th Century Fox to be distributed by Warner Bros.