Mr. Peabody, the most accomplished dog in the world, and his mischievous boy Sherman, use their time machine - the WABAC (pronounced as way back) - to go on the most outrageous adventures known to man or dog.

Mr. Peabody, the most accomplished dog in the world, and his mischievous boy Sherman, use their time machine – the WABAC (pronounced as way back) – to go on the most outrageous adventures known to man or dog. But when Sherman takes the WABAC out for a joyride to impress his friend Penny, they accidentally rip a hole in the universe, wreaking havoc on the most important events in world history.  Before they forever alter the past, present and future, Mr. Peabody must come to their rescue, ultimately facing the most daunting challenge of any era: figuring out how to be a parent. Together, the time traveling trio will make their mark on history. 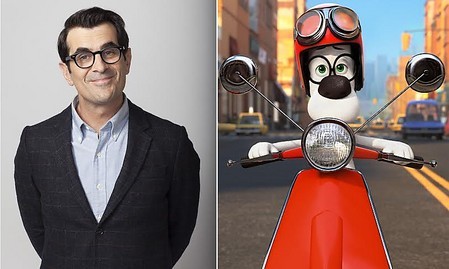 “Mr. Peabody & Sherman” is an adventure-comedy featuring science fiction, time travel, outlandish characters and clever dialogue, all of which are bound together by the unexpected relationship between the titular heroes – a dog and his boy.   Peabody possesses the genius of Einstein, the wit of Oscar Wilde, the daring of Indiana Jones, the deductive skills of Sherlock Holmes, the sartorial style of James Bond, and the culinary skills of Mario Batali.  The one thing that challenges Peabody is keeping up with his adopted boy Sherman. Peabody devotes himself to Sherman, from whom he learns the one thing even a genius has to figure out – parenthood. 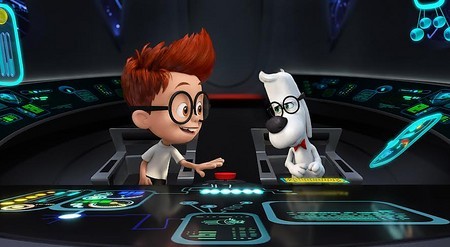 Ty Burrell, who voices Peabody, brings additional shadings to an already richly conceived character.  But initially, says Minkoff, the “Modern Family” star wasn’t an obvious choice.  “Ty is famous and beloved for playing put-upon dad Phil Dunphy in ‘Modern Family,’ and Phil isn’t the sharpest tool in the shed.  But when we put his performance together with the character of Peabody, it really locks into Peabody’s personality.” 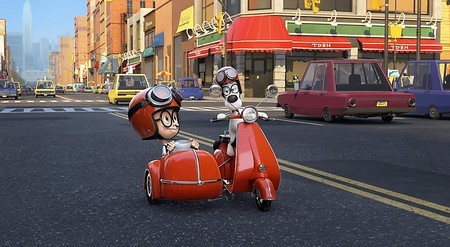 Burrell certainly had his work cut out for him; after all, he’s playing a character that, he describes as “essentially perfect, which is a very interesting kind of character to play because I am so imperfect.  Peabody makes almost no mistakes, expect in fatherhood, as all dads do.  He can think himself out of any situation or problem, except when it comes to dealing with Sherman.”  Burrell prepped for the role by watching the classic television shorts upon which the film is based.  “From that, I would find my way back into my own voice,” he explains. “Peabody speaks with such precision; his consonants are always very clear.”

With a range of performances across television, contemporary film, and classic theater, award winning TY BURRELL (Mr. Peabody) continues to prove himself as one of the finest and most versatile actors today.  Burrell stars as ‘Phil Dunphy’ on ABC's critically acclaimed hit and award-winning series “Modern Family,” which is currently in its fifth season. Burrell most recently won the Monte Carlo International Television Festival Award in the category of Best Comedic Actor. In 2012 he won the Critics' Choice Television Award for the Best Supporting Actor in a Comedy Series and Comedy Central honored Burrell with the 2012 Comedy Award in the category of Performance by An Actor – TV. He won the 2011 Emmy Award for Outstanding Supporting Actor in a Comedy Series and has been nominated three other times in the same category. Ty also shared the TCA award with Nick Offerman for Individual Achievement in Comedy and has received three Screen Actors Guild Award nominations for Outstanding Performance by a Male Actor in a Comedy Series.

Burrell was seen this past fall in The Weinstein Company’s “Butter” opposite Jennifer Garner and was also recently seen in Christopher Neil’s film “Goats,” an adaptation of the coming of age story by Mark Jude Poirie.  His additional film credits include “Morning Glory,” opposite Harrison Ford and Diane Keaton; Universal’s “The Incredible Hulk” opposite Edward Norton and Liv Tyler; “National Treasure 2” opposite Nicolas Cage; Steven Shainberg's “Fur” about the life of Diane Arbus; and Nicole Holofcener’s “Friends With Money” opposite Catherine Keener, Frances McDormand and Jennifer Aniston.  Other notable film credits include Finn Taylor’s romantic comedy “The Darwin Awards”; David Jacobson’s “Down in the Valley” opposite Edward Norton and Evan Rachel Wood; the Weitz brothers’ “In Good Company;” Ridley Scott’s “Black Hawk Down;” “Dawn of the Dead” (Cannes Film Festival); and Ivan Reitman’s “Evolution.”

From DreamWorks and 20th Century Fox,  “Mr. Peabody & Sherman” will open March 6 in cinemas nationwide to be distributed by Warner Bros. in the Phils.