Miles Ocampo Shines in the Smart and Touching ‘Write About Love’

It has strong performances by its leads -- most specifically by Miles Ocampo -- and if that’s not enough, it has some gorgeous songs by Yeng Constantino to seal the deal.

As a writer, there’s a lot for me to love about ‘Write About Love.’ It’s wonderful how director Crisanto Aquino and co-writers Aquino and Janyx Regalo really capture the ways in which a writer’s personal life bleeds into the work, the story that they are currently writing.

‘Write About Love’ is the story of a romantic amateur writer who manages to sell an original story to a film studio but is asked to work with a more experienced, successful indie writer to help flesh out a new draft. But at its heart, the film really deals with the things that we are struggling with inside of us and how it comes out in the most surprising ways. The most obvious one in the film is the writers and the script that they are working on — which comes to life in scenes that the writers can see and manipulate — but there are more layers within this tricky movie that is seemingly about love. 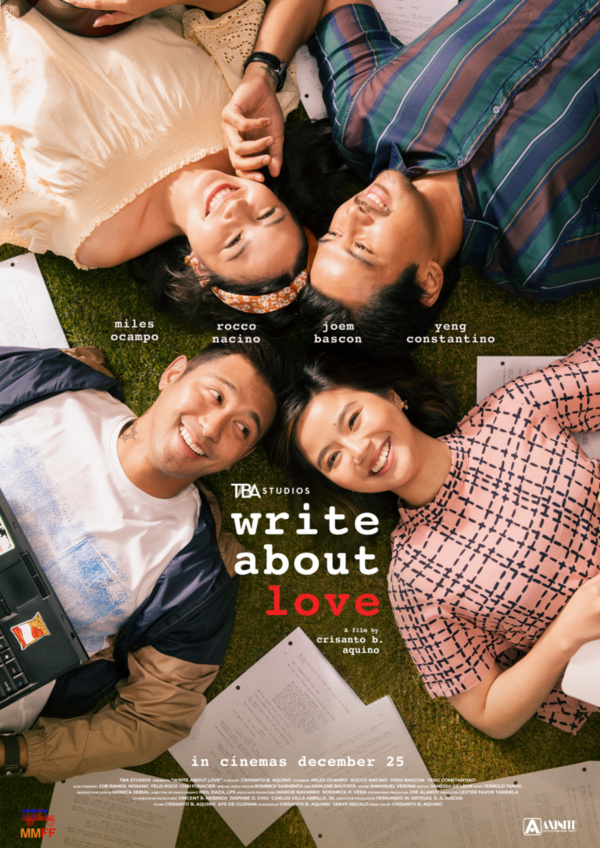 Because not only does the movie talk about romantic love and how one’s personal experiences can change one’s own actions and reactions towards this, but ‘Write About Love’ also manages to expand the definitions of the subject matter to encapsulate bigger and broader themes.

And at the heart of this movie is a breakout performance by Miles Ocampo as the young writer. Ocampo is wonderfully expressive, who can do so much with the slightest of gestures. She understands the camera and knows that it picks up everything so she’s unafraid to work small. A quick side-eye here or sliver of a smile from Ocampo tells a whole story of what she’s feeling inside and it really gives the film a wonderful place to follow this story of what it really means to write.

And what does it really mean to write? The characters that the two writers come up with — Joyce and Marco, played wonderfully by the ever-reliable Yeng Constantino and Joem Bascon –become foils for the two characters to really reveal more of themselves. ‘Write About Love’ truly understands what it means to write or take on any creative/artistic pursuit and that’s to become vulnerable enough to show yourself.

Amidst the romantic comedy tropes and even the long discussions about filmmaking (with a healthy dose of references to the industry and Philippine cinema), the film manages to veer away from being didactic because as the two writers talk about the process, they end up having to open up more and more about what it is they are truly trying to say out loud.

And to their surprise, they are things they didn’t even know or understand until so much has happened.

Alongside Miles Ocampo, Yeng Constantino, and Joem Bascon, ‘Write About Love’ also features strong performances from Rocco Nacino (who plays the experienced writer), Che Ramos (who plays Ocampo’s mother) and Romnick Sarmienta (who plays Ocampo’s father). Each of these characters help create a tapestry of what love really looks like in all its various degrees and reasons; the dynamic push-and-pull between joy and pain.

Because to write about love, one has to understand that one must also write about pain. ‘Write About Love’ delivers a wonderful and clever movie that takes all of these concepts and weaves them in a strong narrative that manages to surprise while hitting all the right notes that I was left in tears by the end of the film.

Yes, as a writer, I enjoyed watching the process of my work showcased so accurately on screen but you don’t have to be a writer to enjoy this film. If you’ve known love or pain, by any degree, then this film will speak to you. It has strong performances by its leads — most specifically by Miles Ocampo — and if that’s not enough, it has some gorgeous songs by Yeng Constantino to seal the deal.

Find showtimes for ‘Write About Love’ and book your tickets in advance!