This is really Brillante Mendoza in fine, fine form.

Mixing myth and social realism, animation and live action, director Brillante Mendoza delivers his strongest work, and his most accessible, in this year’s Metro Manila Film Festival with ‘Mindanao.’ It is the story of Saima, Muslim woman who is caring for her four year old daughter, Aisa, while her husband is a combat medic in the midst of battle in the jungles of Maguindanao.

The film begins in wonderfully animated sequence of the legend of the brother’s Rajah and Sulayman and how they saved the islands of Mindanao from the pair of dragons Ginto and Pula. Narrated by Saima, the story continues in spurts within the story, creating multiple parallelisms within the story with the two dragons symbolising various things depending on what’s happening in Saima’s narrative.

The main storyline, Saima’s narrative, highlights the struggles of Saima as she provides for the needs of Aisa, even when the doctors tell her the tumor in the back of her eye isn’t responding to the chemotherapy. Saima is a woman whose strength lies in her hope. In fact, she is a prominent figure in The House of Hope, an NGO that shelters children who are battling cancer with their families. While she is managing the pain and the care of Aisa, Saima is also thinking of Malang, her husband who is out in the field, caring for the wounded in his regiment when they get into combat with rebels.

Mendoza is in fine form here as he keeps the camera focused primarily on Judy Ann Santos, who delivers an outstanding performance as Saima. As the lead character, Santos is strength personified. There is a weariness behind the calm and stoicness that she exhibits. This is a woman whose entirety is held together by hope and faith. She is capable of warmth and joy but you can see how fragile this strength might be — the lives of her child and husband stand at a razor’s edge — and the potential energy within Judy Ann Santos carries this movie from beginning to end. What she does with this energy is an example of acting at its finest. What makes it even more amazing about Santos’ performance is how she refrains from overdramatizing Saima’s core being. The work is in how she plays with stillness and silence.

If there was any doubt that Judy Ann Santos is one of the greatest actresses of her generation, her performance here should be dispel any of it.

Written by Honee Alipio, ‘Mindanao’ makes clever use of the legend of Rajah and Sulayman and their battle with the dragon Ginto and Pula as an allegory that builds a multi-faceted and complex image of Mindanao. Without a doubt, the two dragons are easily recognizable as the two obstacles towards Saima’s happiness: Aisa’s cancer and the armed conflict that plagues Mindanao, which keeps her husband out in the danger zone.

But even as the narrative details the day-to-day highs and lows of Saima’s struggles, the deft touch of Mendoza is how he creates more and more symbolisms within the allegory. There are times when the dragons are also representative of Saima and Malang (Allen Dizon) when taken into the context of Aisa, who also happens to the name of the princess in the legend. As the film unfolds, there are more and more metaphors that come to the foreground: the good and the bad of the military presence in Mindanao, the sorrows and joys of life on the island ravaged by conflict.

‘Mindanao’ is one of Brillante Mendoza’s more delightfully lyrical films; where he lets the figurative elements color this world and creates a space for the audience to engage with the world. Yes, there are flaws — a shaky handheld camera work, an unnecessary (and obvious) advertisement for the armed forces, and a tendency to exoticize the locale and the setting — but these are easily overcome by the strengths. Judy Santos is exquisite and captivating. There is a balance of struggle and joy and a wonderful focus on the details, which leads up to larger themes and bigger ideas. And the animation is dynamic and is just perfect for this complex tale that is both tender and eye-opening.

This is really Brillante Mendoza in fine, fine form.

Find showtimes for ‘Mindanao’ and book your tickets in advance! 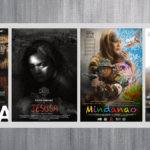