Documentary as Memory: A Review of ‘The Kingmaker’

The documentary follows former First Lady Imelda Marcos and her son, former senator Bongbong Marcos, on their campaign trail in 2014 when Bongbong Marcos ran for vice-president all the way to 2016 at the results of the election.

A well-made documentary becomes more than just a record of an event or a moment in time, but it carries with it the power of memory that it can energize or charge the spirit to action. They say “history is written by the winners,” so we should always be careful of how the past is framed by history books. But as today’s events have proven, even our history is being revised and changed to suit the power plays of people with influence and capabilities. So, to get a more authentic perspective over the past, we look at art to guide us to what people were feeling and responding to. Art is the true barometer of the times.

This is best exemplified by ‘The Kingmaker’ by Lauren Greenfield. The documentary follows Imelda Marcos, former First Lady and widow of former dictator Ferdinand Marcos, and her son, former senator Bongbong Marcos on their campaign trail in 2014 when Bongbong Marcos ran for vice-president all the way to 2016 at the results of the election.

From their own mouths, they talk of their lives in Malacanang when the late dictator was in power and their version of events, while the documentary juxtaposes their account with that of the people whose lives they’ve affected — from the locals of Calauit island, who were forced out of their homes to make way for Imelda’s lavish desire to have African animals brought into the country, to the activists like Pete Lacaba, Etta Rosales, and May Rodriguez who suffered under the tyranny of the martial law, the former head of the Presidential Commission on Good Government Andres Bautista, who was was tasked to recover all the ill-gotten wealth of the Marcoses, Vice-President Leni Robredo, and even some of the friends of the Marcoses.

Mixed in with these interviews are footage of news reports and interviews from as far back as the 70s, creating a dazzling image of a woman who was so powerful that a whole country was trembling at her every whim.

What the documentary skillfully maneuvers is the incomprehensible whimsy and fantasy of Imelda Marcos’ rhetoric; the narrative that she weaves that would have been comical if it were not based in what she really feels is true. The film really presents us with a dilemma as to whether this woman who called people like Richard Nixon, Saddam Hussein, and Chairman Mao as allies, if not friends, really believes every word that comes out of her mouth or if this is all just some elaborate game to mess with our heads.

Because at one hand, what she says would elicit laughter from the audience because of its absurdity but in the other, the film captures a woman who is mindful of her effect over people and is very careful of her image and her presentation.

In what appears to be very unguarded moments, captured by the camera which one can assume has been around for so long during the period of the interview that it has been forgotten, we see Imelda Marcos prepare large amounts of money to throw at people’s feet, an act so blatantly feudal that it begs the question of what time period you are supposed to view this scene. Completely surrounded by assistants, helps, and security detail, and surrounded and adorned in grandiosity of dress and home furnishings, the extravagance of Imelda Marcos tells a whole lot more than the words that come out of her mouth.

And within this timeline in the documentary, from the Marcos’ recollections of their storied past when they held the country in their hands, all the way through the vice-presidential campaign of former senator Bongbong Marcos, the documentary paints a picture of a history that is not just ignored or forgotten, but being rewritten as we sit there watching the film unfold.

It is a dazzling piece of work because unlike many documentaries that I’ve seen that tries to capture and contextualise a moment in time, ‘The Kingmaker’ maintains a powerful urgency because this event that it is documenting is happening — present progressive — a moment that is still unfolding with an ending that one can foresee and maybe, one that we cannot stop.

This is a story that is currently in motion, that is yet to be concluded, and that is the energy that is sparked at the beginning and ending of the film. It is a dazzling piece of work that needs to be seen. 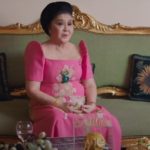 'The Kingmaker' is Streaming on iWant This Friday!

Docufilm 'The Kingmaker' Returns to The CCP

The documentary on the Marcoses returns this February 19.