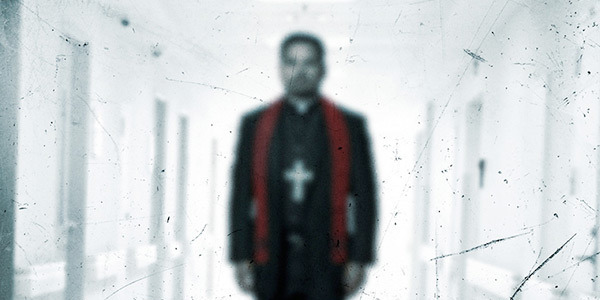 ‘The Vatican Tapes’ Chooses to be Ordinary

It all starts promisingly enough, with opening credits that feature a barrage of strange, disturbing footage of all the exorcisms that the Vatican is supposed to be suppressing in the world of this film. The Vatican Tapes is directed by Mark Neveldine, who is one half of the directing duo that brought us the Crank movies. Exorcism movies tend to be all the same, but with Neveldine at the helm, there was some promise that this film would at least be weird. Unfortunately, though there are little spots of bizarre inspiration, the film is mostly content to follow the mold set by countless others. It also ends just when things get really interesting, the movie squandering the opportunity to take things to the next level.

It all starts promisingly enough, with opening credits that feature a barrage of strange, disturbing footage of all the exorcisms that the Vatican is supposed to be suppressing in the world of this film. But then it moves on to tell the story of Angela (Olivia Taylor Dudley), a young woman whose bizarre behavior alarms her boyfriend Pete (John Patrick Amedori) and her father Roger (Dougray Scott). Father Lozano (Michael Peña) befriends the family, and takes notice of Angela’s seemingly supernatural affliction. He calls from help from the archdiocese, and word gets back from the Vatican. Cardinal Bruun (Peter Andersson), who leads the secret section of the Church that hides the truth about possession, arrives in the US to deal with Angela.

As soon as it gets to the story of Angela, it’s pretty much just running through the clichés of the genre. There are birds running into windows and ominous mumbled speech. It becomes obvious pretty early on that something awful is happening to Angela, but it takes a movie a pretty long while to get down to the business of exorcism. There are some fun bits along the way, a occasional burst of weirdness that separates the film from every other demonic possession movie, but those are few and far in between.

The film does get to something kind of intriguing eventually, but that’s where the story ends. There is potential here for a sequel, one that might explore something that hasn’t been done nearly as much. But that promise certainly isn’t worth sitting through the entirety of this film, which just has precious little to contribute to the genre. At best, Neveldine shows some inventiveness in how the film moves with the action, his camera more prone to smooth, eerie movement that it tries to document all of the supernatural happenings surrounding the main character.

But it’s not nearly enough. In the end, this is still just another cruddy exorcism movie, populated with characters devoid of personality. As good as Michael Peña is, he can’t really bring life to the character of Father Lozano. There just isn’t anything to work with. The film does get a lot out of Olivia Taylor Dudley just staring into the camera, but it’s hardly a showcase of the actress’ abilities. Dougray Scott and John Patrick Amerdori are stuck in the sidelines, basically passive observers through most of the film. Peter Andersson and Djimon Honshou are underutilized in the film. They make up the most promising portions of the movie, and it might have been better if the film had just focused on what their characters are up to.

The Vatican Tapes had plenty of chances to break away from what’s already been done countless times. There is just too little to gain from watching another poor woman slowly succumb to a demonic possession. The film could have gotten down to the business of exorcism and the vast conspiracy that is apparently at the heart of this story. Or it could have just started where it ends, with the possibility of a far more complex and difficult story to be told about the aftermath of such terrible events. But the film chooses to be ordinary.