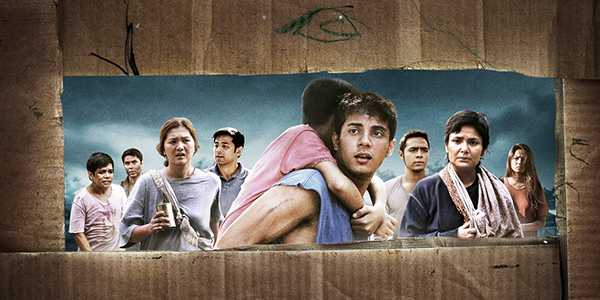 ‘Homeless’ is a Succession of Suffering

It largely pushes the case by forgoing story altogether, instead making a bid for sympathy through a series of terrible events that leave the characters helpless to change their fate. Homeless attempts to make a case for helping people who live in the streets, begging for money. It is a noble goal, but the movie that's been produced doesn't do a very good job. It largely pushes the case by forgoing story altogether, instead making a bid for sympathy through a series of terrible events that leave the characters helpless to change their fate. And while there is some truth to the awfulness within, the film overdoes things and ends up making it all feel artificial.

The film starts out in a village destroyed by the ravages of a storm. With his father dead and his mother deep in grief, Udong (Ejay Falcon) is suddenly burdened with the responsibility of taking care of his three young siblings. The entire village is evacuated under false pretenses, and Udong and his family suddenly find themselves in Metro Manila with no place to go. He and his family, along with a handful of other families from their village, are forced to work for a criminal syndicate that sends people out on the streets to beg for food and money.

This isn't so much a story as it is a succession of suffering. The plot doesn't leave the characters with much to do other than accept their plight. The film does a lot to make their situation seem dire, but it still feels like the characters have options that they simply aren't exercising. They aren't planning to rise up against their oppressors. They aren't trying to get their story out there. They aren't trying to appeal to a higher authority. It could be reasoned that all these attempts would be doomed to fail, but it would be more compelling to see them try and then fail than to just watch these people accept their fates and die slowly under the thumb of their criminal captors.

It doesn't help that there are some strange tonal shifts in this movie. The very first scene of tragic devastation is offset with a weird comedic bit concerning a mother arguing with her gay son. Later, the rape of a minor is followed by a scene that has that same character telling the victim that he's envious that she has apparently gotten her period. The seriousness of this film is put into question with scenes like these, which seem to make light of the awfulness that the characters are going through.

The movie just shuffles through all the suffering, never really focusing long enough on any one thread to make them anything than empty markers for drama. Characters disappear for long stretches, and reappear randomly with no effort from the ostensible protagonist. And there are those who simply never come back, their stories left hanging as the film wants nothing more out of them other than their pain. A cast of professional actors do well enough in these roles, but they also bring strange glamour to being homeless. They all look too put together, some of the actors sporting trendy haircuts that meticulously maintained.

Homeless doesn't offer much of a story for its characters, and thus doesn't get to much of a resolution. It basically has them receiving aid without asking for it, rising out of their situation through the benevolence of others. It is a good thing to encourage people to help the homeless, certainly, but the story told in this film doesn't actually make that case very well. It overdramatizes an already terrible situation, getting away from reality as it pursues a miserablist portrait of life in Metro Manila. The plot just doesn't go anywhere, and at points, the film seems to go out of its way to just be awful.