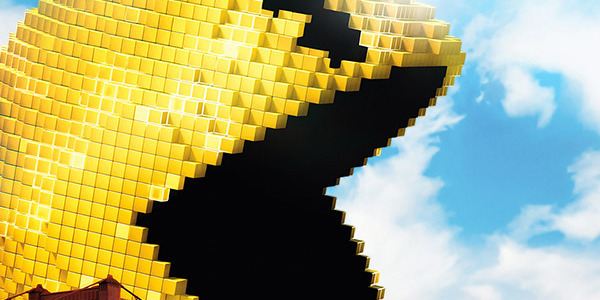 The film spends a lot of time establishing how Sam hasn’t really done anything with his life, his skills in video gaming not translating into anything particular useful. Pixels is a movie about nerds saving the world. That's the theory, at least. It is actually about an Adam Sandler character saving the world. He just happens to be called a nerd multiple times, despite not exhibiting any qualities that would make him fit that description. The film seems to show sympathy for nerds, but it doesn't quite have a full grasp of what it means to be one. This film is far too lazy to take those ideas seriously, and it results in just another plodding Sandler vehicle.

In 1982, NASA sent out a space probe containing a video with footage of the worldwide video arcade championships. This was apparently misinterpreted by aliens as a challenge from Earth, and in present day they send real versions of video games to attack the planet. After losing two of the challenges, Earth has just one more chance before the aliens destroy the Earth. Sam Brenner (Adam Sandler), who back in 1982 came in second place at the tournament, is recruited to help fight the alien threat.

The film, at first, seems to be a tribute to nerds, to those people that devoted a good chunk of their lives to frivolous pursuits. In this case, it's arcade video games. The film spends a lot of time establishing how Sam hasn’t really done anything with his life, his skills in video gaming not translating into anything particular useful. This weird happenstance provides him with the opportunity to be the hero for once. The problem is that the film isn't very nerdy. It doesn't give these video games the same rigorous reverence that these characters have for them. And so there are apparently cheat codes for Pac-Man that still work when you're driving a modified Mini and playing as the ghosts. Also, Q-Bert talks. Blasphemy.

But the real problem with the film goes beyond the nerdy quibbling. It is that it is nearly two hours long, and so much of it is devoted to a non-starter of a romantic subplot. It is that women are portrayed largely as trophies. In one instance, that is literally the case. It is also that its jokes are so lazy. A side trip to England results in a running gag that basically amounts to "British people talk funny." It is that the script is written so haphazardly. At one point it is mentioned that the aliens were peaceful until they got the video. And rather than find a solution that honors that idea, the film just takes the easy narrative way out. The visuals are mostly all right with some sequences that really come alive in 3D. But they are fueling a film that isn't worth the effort.

That laziness does tend to come with having Adam Sandler involved in the production. Here he is awfully miscast as a nerdy character. His low-energy delivery sucks all the life out of this film. He shares precious little chemistry with the slumming Michelle Monaghan, who like so many comedy leading ladies, doesn't get much of an opportunity to be funny. Josh Gad and Peter Dinklage try to make up for Sandler's lack of energy, fully committing to manic roles. But it isn't nearly enough. And they aren’t actually great performances by any means. It’s just that these Sandler productions have lowered the bar to the point where any effort exerted feels like a godsend.

For Pixels to work, it would have needed the people involved in the production to really love video games. This is, after all, at the very heart of this concept. The film seemed to get off on the right foot, with its opening scene set in 1982 displaying an attention to detail that really got across what kids got out of spending time in the arcade. But it quickly loses it as it heads deeper into the picture, where the lazy adherence to formula becomes the main priority.

Not only does the unique plot and hilarious comedy of Columbia Pictures’ “Pixels” distinguish it from the crowd, but the film also looks different from other summer films.