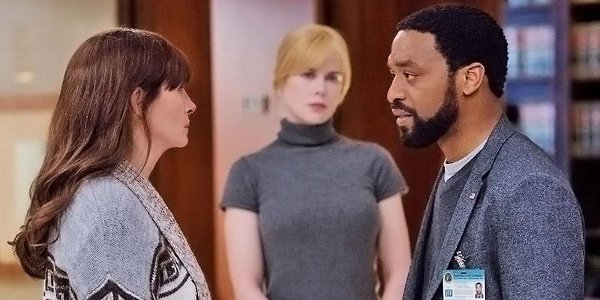 Award winning and iconic actors Julia Roberts and Nicole Kidman team up in a movie for the first time ever in the highly anticipated thrilling movie of the year “Secret in Their Eyes” along with Oscar nominee Chiwetel Ejiofor.

Award winning and iconic actors Julia Roberts and Nicole Kidman team up in a movie for the first time ever in the highly anticipated thrilling movie of the year “Secret in Their Eyes” along with Oscar nominee Chiwetel Ejiofor. In the hair-raising dramatic thriller directed and written by Academy Award nominee Billy Ray, “Secret in Their Eyes” sees former FBI agent Ray (Ejiofor) haunted by the murder of the daughter of his good friend and former partner Cobb (Roberts) – a case left unsolved for the past 12 years. At the time, Ray and Cobb apprehended a suspect, Marzin, who was an informant during a counter–terrorism investigation while the nation was gripped by fear. Due to his importance in that plot and the fact that his confession was extracted under questionable means, Marzin was eventually released and Ray lost sight of him…until now. Ray returns to Boston and must confront his past, including Claire (Kidman), with whom he had a working relationship and unrequited love. As Ray inches closer to solving the crime, he uncovers a shocking truth that will shed a terrifying new light on past events. Based on the Academy-Award winning Argentinian film, acclaimed filmmaker Billy Ray is set to deliver a sophisticated crime thriller that explores what people pushed to their limits can hide in the dark corners of the human heart. As revealed in the trailer that was recently launched this year, “Secret in Their Eyes” gives the audience a glimpse of a heartbreaking and disturbing scene where a mother’s worst fear had been unveiled who discovered that her daughter had been murdered and was left in the dump. “It was just one of those scenes. You knew it was part of the reason Julia was doing the movie and yet it was something she was really dreading,” explains writer-director Ray, who earned an Oscar nomination for the Captain Phillips screenplay. “She was going to have to go to a place that was going to be very painful.” Says Ray in recent interviews, “It’s also the first movie that has co-starred Oscar winners Roberts and Kidman. “You always want big stars as long as they're great actors. In the case of Julia and Nicole, you get both. And it was a sight to witness the two powerhouse actresses play off of each other. There was enormous respect, great camaraderie, and, in my opinion — I don’t know if either of them would ever admit to it — there was a very healthy, kind of athletic level of competitiveness, they both had such regard for each other and they both wanted to do their best because the other was in the movie.”

Academy Award winner Julia Roberts stars in her latest and another yet Oscar-worthy role in the crime thriller “Secret In Their Eyes” based on the 2010 Academy Award winner for Best Foreign Language Film directed by Juan Jose Campanella “El Secreto de Sus Ojos.”
0