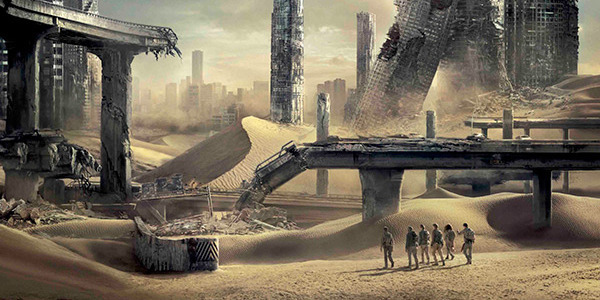 The Answers Don’t Come in ‘Maze Runner: The Scorch Trials’

In its final moments, it revealed a grand twist that changed everything about the situation of the community of young people that survived the trials of the Maze. The Maze Runner left a lot of questions unanswered. In its final moments, it revealed a grand twist that changed everything about the situation of the community of young people that survived the trials of the Maze. It didn't make a lot of sense, but the promise of the sequel did keep things intriguing. Now, Maze Runner: The Scorch Trials arrives with the expectation of resolving some of these nagging mysteries. But that isn't exactly what happens.

The sequel basically picks up where the first movie left off. Thomas (Dylan O'Brien) and the gladers appear to have been rescued by an organization fighting against WCKD, the seemingly malevolent company that put them in the maze. They are brought to some facility where they are promised eventual safety. Soon enough, however, Thomas discovers the true nature of their rescuers, and he and his friends break out of the facility. They head deep into what is left of the world: ruins within a desert wasteland populated with humans infected with a disease that turns them into mindless, violent monsters.

Like the first film, The Scorch Trials works well enough as a straightforward action film. The monsters in this edition are much less interesting than the spiders of the previous film, but it’s still able to take advantages of an interesting environment in order to ramp up the tension. The world outside the maze is a mess of ruins, and the heroes are made to fend off zombie-like monsters in abandoned malls and downed skyscrapers. The movie works best outside the context of its mythology, the whole enterprise driven by the immediacy of survival against monsters.

But it cannot hold off the need for explanation for too long. What the film set up in the final moments of the first movie didn’t seem to make a whole lot of sense, and this sequel really needed to clear things up. One whole movie later, and it still doesn’t hold together. It still isn’t clear what purpose the maze really served. The ultimate goal of WCKD is revealed, but it still doesn’t make any sense. It doesn’t help that one of the characters actually seems to know what’s going on, but refuses to tell everyone else. The film hints at a moral dilemma that never feels as complicated as it ought to be, because it doesn’t really present the argument for one side clearly.

The film does mostly manage to feel propulsive. It’s always moving forward, even if the actual narrative destination is kept a little too vague. But the action scenes are coherently directed and edited, and the film does a good job of capturing a scale of the devastation. Dylan O’Brien makes the most out of a role that mostly calls for him to look like he knows what he’s doing even though the goal is unclear. The other kids aren’t really given enough to make one stand up and notice. It is the adults who get the more fun roles. Giancarlo Esposito, Alan Tudyk and Aiden Gillen are clearly having the most fun in this movie.

Perhaps the third movie in this franchise will finally bring all these loose narrative pieces together. Perhaps the answers are wholly satisfying, and will justify the narrative obfuscation that takes place in these first two movies. But for now, Maze Runner: The Scorch Trials is painfully unsatisfying. While it provides some solid action thrills, they all take place within a context that begs for some sort of narrative resolution. Every new revelation in this film just makes the overall picture of the world blurrier. It doesn’t fill one with much faith that it’s all going to come together.

Ki Hong Lee Springs Back into Action in "Maze Runner: The Scorch Trials"

On September 9 - Run or Burn in "Maze Runner: The Scorch Trial"

The Gladers are now out of the mysterious maze from the first movie adaptation of James Dashner’s highly successful series “The Maze Runner.”