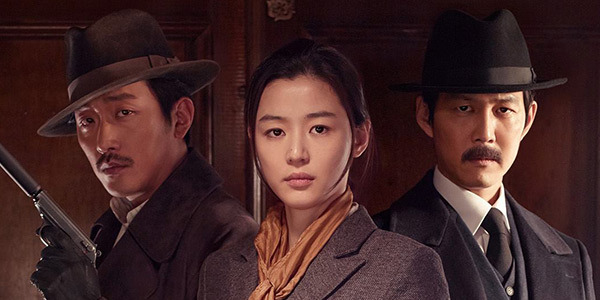 ‘Assassination’ is Fun, but Badly Dubbed

This movie also involves the unlikely reunion of twin sisters, a case of mistaken identity, an arranged marriage, and a gun-for-hire known only as "Hawaii Pistol," whose loyalties are uncertain. Assassination kind of looks like a prestige historical movie, but it isn’t that at all. While it unwisely holds on to some vestiges of seriousness, it is mostly a crazy, twisty action movie that involves a lot of silly plot elements. Despite its lengthy runtime, this film ends up being a lot of rollicking, period fun. The problem is that it has been brought here under the SineAsia banner, and the dubbing has somewhat gotten in the way of the enjoyment of this picture.

It is 1933, decades into the Japanese occupation of Korea. Three Korean prisoners with military backgrounds in China are recruited into the Korean Independence Movement to carry out a vital mission. Among them is An Ok-yun (Gianna Jun, with the voice of Antoinette Taus in the local dub), a sniper who witnessed firsthand the brutality of the Japanese in Manchuria. They sneak into Seoul to assassinate a high ranking Japanese commander and a Korean collaborator. They face great odds in carrying out their mission, which has been made all the more dangerous by the presence of a traitor among the ranks of the resistance.

But this is just half the story. In fact, it's all just setup for the insanity to follow. This movie also involves the unlikely reunion of twin sisters, a case of mistaken identity, an arranged marriage, and a gun-for-hire known only as "Hawaii Pistol," whose loyalties are uncertain. These various ludicrous elements dance around each other, slowly converging into an explosive situation that leaves everybody's fate uncertain. It's pretty thrilling, if completely ridiculous. The film fires on all cylinders as it juggles these various elements in the lead-up to a really fun climax.

There are a few elements too many, though, leading to an overlong runtime. There is a part of the film that takes place in 1949 that makes a bid for serious consideration as it studies the plight of collaborators after the war. It doesn’t quite fit within the action movie period hijinks that define most of the picture. It’s interesting stuff, to be sure, but this isn’t the right movie for it. It mostly drags things down, and only serves to make the rest of the film look even sillier.

This is a gorgeous film that makes great use of the period setting. It revels in the aesthetics of the era, with snazzy costumes and stylish production design. One must note that the dubbing is not very good for this film. The voice work is more or less okay, though the translation uses language that feels a little archaic. And for some reason, in the screening that I saw, the dubbed version was a little out of sync. Sound effects came about a second too late, even though the dialogue seemed to be timed correctly. This is unacceptable.

Assassination is a pretty fun film, but it’s difficult to recommend watching the current version in our cinemas. I am more supportive of the SineAsia initiative than most. I do believe that they’re bringing good films over here, and I am rather fond of the charms of our local translators. But the last few films released under this banner has not produced great results. In this case, the sound design is actually ruined. Still, it’s equally difficult to tell people to just miss out on the sheer entertainment that this film provides. This is a really well crafted film, and the bad dubbing doesn’t quite negate all that craft.