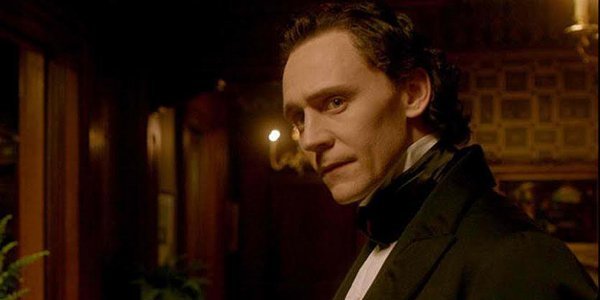 One of today's most sought-after actors, Tom Hiddleston (Loki in “Thor” and “Avengers” films) stars in Universal Pictures' gothic thriller “Crimson Peak” as Sir Thomas Sharpe, a refined young bachelor from England who comes to America seeking investments for his new invention. Sharpe quickly falls for Edith (Mia Wasikowska), and the young woman is smitten by the dark foreigner who shows an interest in her writing and fills her imagination with romantic notions of a place far away from home.

Tom Hiddleston, who is well known for his deliciously evil work as Loki in Marvel’s universe, got a phone call from director Guillermo del Toro in the summer 2013 asking him to read the script. He was seduced by the sophistication of the writing and admits that he loved the “moral ambiguity” of his character. In addition, Hiddleston was thrilled at the opportunity to work alongside his longtime friend, Jessica Chastain. And considering that he had previously worked with Wasikowska on Jim Jarmusch’s “Only Lovers Left Alive,” the actor felt the project would be a great fit. Hiddleston had long been a fan of del Toro as well. The actor states: “Guillermo is probably, if not definitely, the primary interpreter of gothic romance in contemporary cinema. He has the capacity to make stories about the supernatural intensely emotional and accessible.”

Hiddleston wanted his character to feel “hugely emotional and redemptive” for the audience to feel his emotional journey so that the film would unfold from a horror to a drama and a romance, undoubtedly del Toro’s own intent. Del Toro provided Hiddleston with a character biography that gave the actor “authentic flavor” for the character he was playing. The director even shared some of Sharpe’s secrets, which he instructed the actor not to share with the other cast. In admiration, Hiddleston affectionately refers to del Toro as “a great Mexican bear,” noting his extraordinary passion having the capacity to “light a spark which goes around the entire crew. We’d follow him everywhere because he believes in it so deeply.”

In the film, when her heart is stolen by a seductive stranger, a young woman is swept away to a house atop a mountain of blood-red clay: a place ﬁlled with secrets that will haunt her forever. Between desire and darkness, between mystery and madness, lies the truth behind the place called Crimson Peak. Here, they will discover the power that love has to make monsters of us all.

“Crimson Peak” opens across the Philippines on October 14 and is distributed by United International Pictures through Columbia Pictures.

The movie is written in such a way that it keeps calling itself out, the point coming to override the narrative a bit.

Mia Wasikowska, from "Alice in Wonderland" to "Crimson Peak"

Visionary Director Takes You to the Haunted World of "Crimson Peak"

In the film, when her heart is stolen by a seductive stranger, a young woman is swept away to a house atop a mountain of blood-red clay: a place ﬁlled with secrets that will haunt her forever.