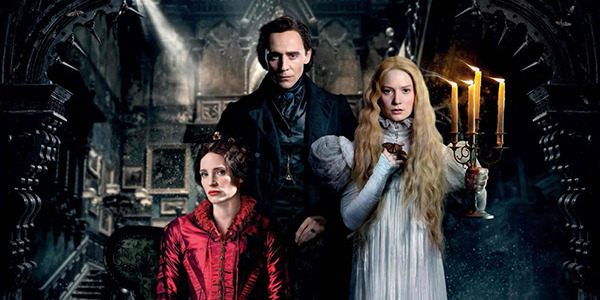 The movie is written in such a way that it keeps calling itself out, the point coming to override the narrative a bit. Crimson Peak is visually, one of the most gorgeous movies you will ever see. The film, like much of director Guillermo del Toro’s oeuvre, is basically built on its visuals. Here, he constructs an absurd house sinking into blood-red clay, with a broken roof that lets in beautiful streams of light and delicate swirls of falling snow. The visuals are so engaging that you might not notice that the narrative is a tad overwritten, the story at times stopping cold for the sake of commenting on the film’s use of a genre’s tropes.

Edith (Mia Wasikowska) is an aspiring young writer in a time when publishers aren't too interested in female authors. The baronet Thomas Sharpe (Tom Hiddleston) is visiting New York, seeking investment from Edith's father for an invention of his. The baronet sweeps Edith off her feet, and following the mysterious death of her father, she marries the English aristocrat and moves into his home in England, where he and his sister Lucille (Jessica Chastain) live. The house, apart from being in major disrepair, seems to be home to something otherworldly. The supernatural matters lead her to discover that there is something that the Sharpes aren't telling her.

Early in the film, Edith tells a prospective publisher of her story that it isn't a ghost story, but a story with ghosts in it. The ghost is a metaphor, she says. Clearly, the movie itself is speaking through its main character. All throughout its lengthy runtime, Crimson Peak is keenly aware of what it is, and what tropes it hopes to invert. It plays around with the elements of the Gothic romance, but it actively subverts gender roles as it heads into it strips bare the veneer of civility and lets loose all the blood just beneath the surface.

It might actually be a little too clever for its own good. The movie is written in such a way that it keeps calling itself out, the point coming to override the narrative a bit. The movie uses the characters talking about Edith's story as a means of commenting on itself. It's a device that kind of amusing at first, but gets somewhat tiresome as the movie drags on. It draws the viewer away from what's happening, blunting the impact of the apparent dangers that the main character faces.

But a lot of that is mitigated by the fact that the film is unbelievably beautiful. It is an incredible showcase of production design, the film expressing its atmosphere of terror and romance through the meticulous construction of its sets, and the precise tailoring of the costumes. Del Toro's camera lingers on the details of the production, making every frame a visual delight. The acting is on point as well, with Jessica Chastain particular impressive in conveying a heady mix of Victorian reserve, hidden passion, and veiled threat. Next to her Mia Wasikowska and Tim Hiddleston are downright pedestrian, despite being quite good as well.

Crimson Peak could have kept things a little simpler. It overextends itself as it falls deeper into the rabbit hole of reflexivity. But having said that, it is worth seeing for the production design alone. As fuzzy as the story gets, there isn’t a single boring moment spent inside the titular property. There is always something beautiful on screen, something that visually expresses the depth of emotion that this genre is meant to produce. Practically every frame of this film is worth cherishing. It is easy to forgive the film for its narrative excesses when the eyes are properly engaged.

One of today's most sought-after actors, Tom Hiddleston (Loki in “Thor” and “Avengers” films) stars in Universal Pictures' gothic thriller “Crimson Peak” as Sir Thomas Sharpe, a refined young bachelor from England who comes to America seeking investments for his new invention.

Mia Wasikowska, from "Alice in Wonderland" to "Crimson Peak"

Visionary Director Takes You to the Haunted World of "Crimson Peak"

In the film, when her heart is stolen by a seductive stranger, a young woman is swept away to a house atop a mountain of blood-red clay: a place ﬁlled with secrets that will haunt her forever.