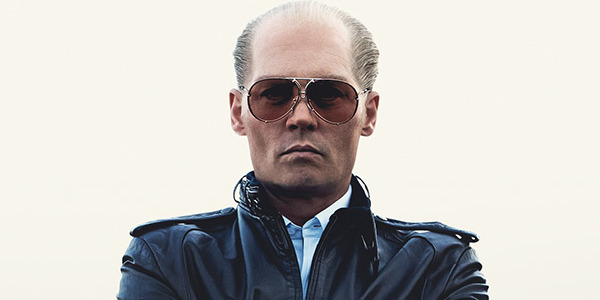 Black Mass is mainly being sold as the story of James “Whitey” Bulger, a Boston gangster who quickly rose to power in the 80s with the surprising help of the FBI. But the story is actually told from the perspective from many different characters, all of whom were connected to Bulger in some way. The film, which uses testimony from all these different characters as a framing device, ends up bouncing between plot points, never finding much of a focus along the way. Despite that, the film provides a solid reconstruction of these remarkable events, with strong performances holding the film together through its various diversions.

It begins in 1979. James “Whitey” Bulger (Johnny Depp) is the leader of the Winter Hill Gang, an Irish crew that worked out of South Boston. At the time, the Mafia was making a move on their territory. Enter FBI Agent John Connolly (Joel Edgerton), who grew up in South Boston worshipping Bulger. He approaches Bulger with an intriguing offer: Bulger becomes an informant, using his criminal connections to help the FBI build a case against the Mafia. In exchange, the FBI will leave the Winter Hill Gang alone. This deal soon proves to be beneficial to both Bulger and Connolly, but there comes a point when Bulger’s activities become too difficult to ignore.

The movie mostly stays on the surface of events. This is a basic recounting of events, with very little room for thematic flourishes. And this works out mostly fine, because this really is an interesting series of events. But in creating a feature film and not a documentary, one tends to hope for something more substantial. In the film, Bulger isn’t really much of a character. In spending most of its time hitting the beats of his rise and fall, there isn’t much room to see what really makes him tick. This is the same problem with Connolly. He makes fascinating choices in this film, ones that really need dissection. But the film never really gets that far.

Despite all that, the film is still pretty compelling. Bulger’s story really is quite bizarre, and it almost enough to just tell the story as is. The film isn’t able to build much of a bigger picture, but from moment to moment, it works out pretty well. Director Scott Cooper certainly knows the gangster movie well. Though the film doesn’t really have much of its own distinct voice, it lifts from the best. This isn’t quite Scorsese, but there are a couple of scenes where it comes close.

Johnny Depp plays Bulger as a low-speaking figure of implied threat. It is an interesting performance, in that it is both showy and weirdly restrained. Depp once again indulges in physical transformation, but balances it out with acting that mostly relies on his ability to convey harm through stares. It’s a highlight of the film, though I imagine it could prove to be somewhat divisive. Joel Edgerton is excellent as John Connolly, though it feels like the actor could have done a lot more if the material called for it. This film is pretty stacked with talent overall, and they contribute much to making the film as watchable as it is.

Black Mass really suffers in comparison to other crime movies, which are often less about the criminal and more about the world in which they exist. Black Mass is content with just relating what happened in those crazy years that Bulger ruled the streets of Boston. A better film might have found something else to say. But one can’t dismiss the value of this retelling altogether. There is still something to be gained from this straightforward approach to telling this particular story. And the craft employed makes it all worth some consideration.

Joel Edgerton Strikes a Deal with the Devil in "Black Mass"