How does one make a movie out of Angry Birds, a little game about birds being flung from a slingshot onto a bunch of green pigs? How does one make a narrative out of a series that has never really gone much further in terms of story than “these birds are angry that these pigs stole their eggs?” The answer is mostly delivered through a manic series of gags, the movie largely ignoring the need to tell a story, in the end crafting an entertaining that like the game, is diverting for five minutes, and frustrating and repetitive for the rest of it.

Red (Jason Sudeikis) is the odd one out in this society of birds. He’s got an anger management problem, and he’s constantly lashing out against the other birds on his island, who are all mostly trusting and happy and not angry. Then, the pigs arrive on the island. They come bearing gifts, and quickly win over the naïve bird populace. Red is the only one who doesn’t trust, and when the pigs reveal their true colors, the angry bird is asked to lead his people as they attempt to right some wrongs.

So this is the story of a peaceful society that learns to get angry, and then carries out war on an opposing force. As much as this is all just a silly cartoon, there is something disquieting about what this film ultimately depicts. It is a story of righteous war, leaving the audience with images of destruction as the markers for triumph and a happy ending. In the game, there isn’t really enough narrative context to make it anything more than a passing diversion. In a movie, it does start to feel a little queasy.

The bulk of the film, however, is mostly dedicated to random nonsense. The film is frantically paced, the whole thing moving desperately from one joke to the next. The humor is spotty at best. There are a lot of pop culture references that reveal a general lack of faith in the source material. It’s never a good sign when a movie has to look outside its own established world to find humor. It just throws a lot of things in there, hoping to get to the audience through sheer volume. It reserves its one extended piece of humor for a scene where an eagle urinates into a lake.

Visually, the film is all right. It is bright and colorful, and the various designs of the characters are fun enough. The voice work is okay, but the material doesn’t quite live up to the talent on hand. Jason Sudeikis lays on the smarm as Red, making an already shaky character just a little bit more unlikable. Josh Gad and Danny McBride are largely wasted on backup characters with little to do. Bill Hader has the most fun playing the film’s villain, playing up a beautifully empty sense of kingly bravado.

The Angry Birds Movie tries to make something out of a property that doesn’t have much depth to it. In the end, it sort of stumps for being an iconoclast, except it always wants its main character to learn that it’s okay to hang out with other people. And before people can think about this, it just blasts into an animated dance sequence, the last refuge for every animated movie that doesn’t really know where it’s going. Because there isn’t really anything here, so we might as well have these cutesy characters dance around to a pop song. 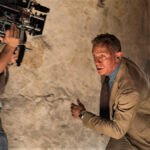