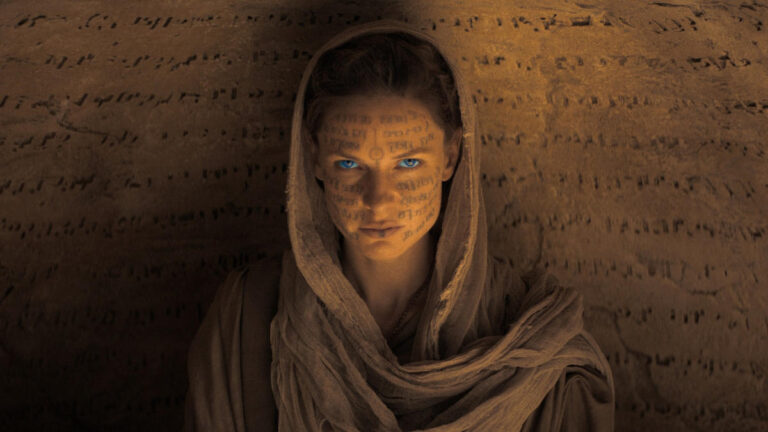 How important is women representation in cinema today? For the filmmakers of ‘Dune,’ it is of utmost significance. So much so that the filmmakers decided to switch the gender of an important character into female, while remaining respectful and true to Frank Herbert’s book from which the film was based.  Read on if you want to know which character it is.

Directed by Oscar-nominated filmmaker Denis Villenueve, “Dune” tells the story of Paul Atreides, a brilliant and gifted young man born into a great destiny beyond his understanding, who must travel to the most dangerous planet in the universe to ensure the future of his family and his people.

Frank Herbert’s 1965 novel is considered one of the most influential books of the 20th century and credited with inspiring many of the greatest films of all time.  It is populated by a throng of interesting male characters, but only three vital women characters  — Lady Jessica (Rebecca Ferguson), Chani (Zendaya) and Reverend Mother Mohiam (Charlotte Rampling).  Let us introduce you to them first.

LADY JESSICA:  Rebecca Ferguson portrays Lady Jessica, who shares the burden of House Atreides’ leadership with her beloved Duke Leto (Oscar Isaac), and an unbreakable bond with their son, Paul (Timothee Chalamet).  As a member of the mysterious Sisterhood known as the Bene Gesserit, she is a master of body and mind, able to weaponize her words through a power known as the Voice, to bend the will of those who dare to threaten her family.  Burdened by the knowledge of what Paul must become to fulfill his destiny, she must prepare him to lead humanity into a better future.

Ferguson and Villeneuve had many discussions about the family dynamic between Jessica, Paul and Leto.  “There are beautiful moments between mother and son, when Jessica trains Paul to become what she believes he can become,” says the actress.  “At moments in the film, Jessica becomes vulnerable and Paul has to step up and become what hopefully she has taught him to become.”

CHANI (Zendaya): A powerful Fremen warrior skilled at survival in the harsh desert dunes of Arrakis, Chani is a mysterious vision that visits Paul’s dreams with haunting blue eyes, calling him to an unknown destiny beyond the far reaches of the galaxy. When she is revealed to be more than just a dream to Paul, he is haunted by new mystery: how can two people who have never met know each other so intimately?

“When we first meet Chani she’s watching Paul, who is threatening her people,” explains Zendaya.  “She keeps her eye on him, sizing him up.  What he doesn’t realize is that she will very easily kill him if he does anything that she doesn’t want him to do.  Of course, she has no idea that he’s been dreaming about her.”

REVEREND MOTHER MOHIAM:  Charlotte Rampling plays the senior figure of the matriarchal secret order known as the Bene Gesserit, the wise Imperial Truthsayer Gaius Helen Mohiam.  She directs her stern gaze of judgment towards the young Paul Atreides.  Subjecting him to the ultimate psychological test of pain and suffering, she prepares him for a dangerous journey across the stars towards his rumored destiny: leading the people of Arrakis out of darkness.

DR. LIET KYNES (Sharon Duncan-Brewster): Dr. Liet Kynes is the Imperial planetologist assigned by the Emperor of the Known Universe to oversee the smooth transition of power on Arrakis. As the foremost expert on the planet and the ways of its people, Dr. Kynes’ allegiance to the Emperor becomes a heavy burden to carry once secret plans are revealed.

Though Kynes is male in the novel, Villeneuve and the producers cast actress Sharon Duncan-Brewster in the role.  The switch came about because the filmmakers wanted more female representation in the film, while remaining respectful and true to Frank Herbert’s book.  They felt Dr. Kynes was the perfect opportunity to add a female role in a way that the author would have approved of, given that he created a society in which women are so powerful.

Duncan-Brewster observes, “Across the board in this story you’re seeing a majority of men, you only have three women.  They are three powerful and integral players in our storyline, as is the role of Kynes, who now opens up a richly complex dialogue for audiences to expand upon whilst holding Frank and his original mission within our 21st century hearts and minds.”

Regardless of the character’s sex, the actress researched Kynes and discovered, to her delight, “someone who holds so much power in the palms of her hands, power in the form of information and secrets.  Then as you peel back the layers and excavate each part of her nature, you start to understand that she is under so much pressure just to keep everything contained and controlled—the culture, the delicate socioecology, the politics.”

In cinemas starting Nov. 10, “Dune” is distributed in the Philippines by Warner Bros. Pictures, a WarnerMedia Company.  Join the conversation online and use the hashtag #DuneMovie