Due to insistent public demand, the Cultural Center of the Philippines re-screens the documentary The Kingmaker by award-winning filmmaker Lauren Greenfield on February 19, 2020.

In commemoration of the 34th anniversary of the EDSA People Power Uprising this February, The Kingmaker will have simultaneous screenings at the Tanghalang Aurelio Tolentino and Tanghalang Manuel Conde.

Screening will be at 1:30pm, 4pm, 6pm and 9pm.  There will be a panel discussion at 4pm.  The CCP offers block screening at 10am, just contact the Sales and Promotions Division at 8832-3706 or email ccpsalesandpromo@gmail.com. 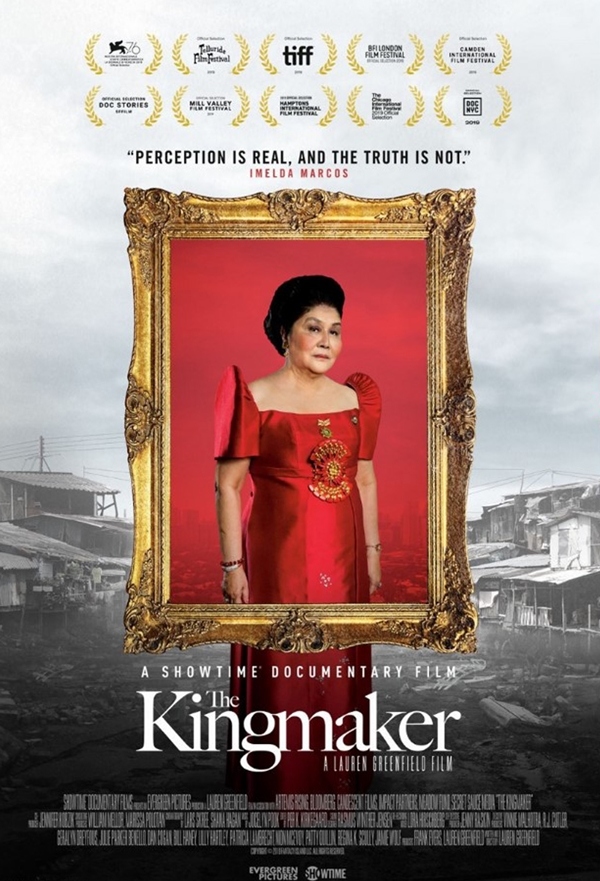 The 100-minute documentary explores the disturbing legacy of the Marcos regime and examines the Marcos family's improbable return to power in the Philippines.

The film chronicles Imelda’s present-day push to help her son, Bongbong, win the vice-presidency.  To this end, Imelda confidently rewrites her family’s history of corruption, replacing it with a narrative of a matriarch’s extravagant love for her country.  “In an age when fake news impacts elections, Imelda’s comeback story is a cautionary tale,” said Greenfield.  Its Philippine premiere at the CCP on January 29 enjoyed overwhelming public response, with over 1,200 audience count.  The moderated panel discussion was attended by approximately 400 people.

The screening of The Kingmaker is under Cinemulat, a CCP Arthouse Cinema program that showcases films that breathe life and context on important social, political and cultural events that discursively shaped the nation and molded the filmmakers, their art and spectators.

For this month of February, the CCP Arthouse Cinema has incorporated several other films to commemorate the EDSA People Power.  Under the Pelicoolab: Gawad Alternatibo Specials, featured films are “People Power: The Philippine Experience” by The Filipino People; “Pak U Erap” by Jose Milos B. Curameng; “Row Our Boat” by Don Salubayba; and “A Day in the Life of Gloria Arroyo” by RJ Mabilin.  They will be screened on February 21, 2020.