Currently 300 boardgames strong and aiming for one thousand soon, this new restaurant is where you can get your geek on with fun games with friends and enjoy a good selection of food and drink.

Currently 300 boardgames strong and aiming for 1,000, this new restaurant is where you can get your geek on with fun games with friends and enjoy a good selection of food and drink. 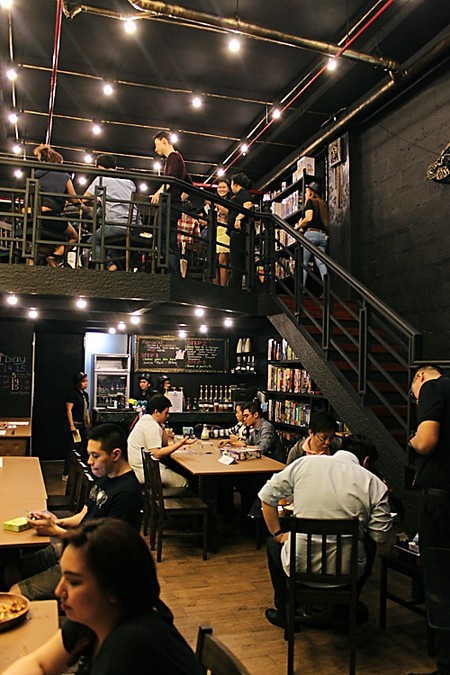 While people get hooked on their tablets and smartphones, heads bowed and glued to their screens with fingers tapping away on their latest app download, Dyce N Dyne swims against the digital game current, offering many reasons to play offline, and interact with people (remember social skills back in the day? they still–and should–exist). Even with the hottest games installed on our phones, this new restaurant reminds us that the tactile experience of shuffling cards, rolling dice, and the multisensory activities one goes through with board games is incomparable. 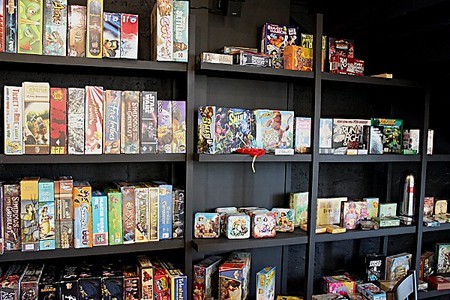 Choose your boardgame adventure: hundreds to choose from to play with your family, friends, or date

"We wanted a place where people could hang out, socialize, eat good food, and play board games," owner Hans Kenner Fernandez tells me, "board games being a social medium, such that in this day and age where people are all playing with their smartphones, we want people to be able to interact personally." Fernandez runs Gaming Library (www.gaminglib.com, facebook.com/Gaming.Library), the country's first online store for board games with a selection very varied and extensive, as they source the games around the world. With its strong and still growing community of board game afficionadios, it was high time for Gaming Library to finally set up a physical store not only for game lovers as their area to play and purchase different board games, but to combine it with a dining experience. Dyce N Dyne is Gaming Library's flagship store which opened last February 12, but is seeing fully booked Saturdays and Sundays, tables topped with colorful cards and boards being played by guests from day to night. 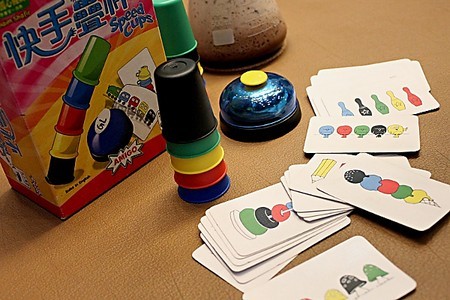 "We are currently at about three hundred games, we're aiming to go for a thousand," shares Fernandez, "All of the publishers from the US, Germany, Taiwan, and Europe are actually sending in demo games. What they found out is if you keep sending in demo games and people try it out, that's when they get it and it grows the hobby." And the board game hobbyists are many in the metro, much so that Hans was saying they used to have problems looking for a place to play — until they finally opened their own establishment. So far, the top three board games that customers at Dyce N Dyne play are Resistance and Cards Against Humanity, two big group games, followed by Splendor. Gaming Library brings in 50 to 100 new titles per month, and a new game Hans recommends is Robinson Crusoe. "It's a game where everyone is on an adventure," he says, "think Lost the television series, and you have to help each other out." 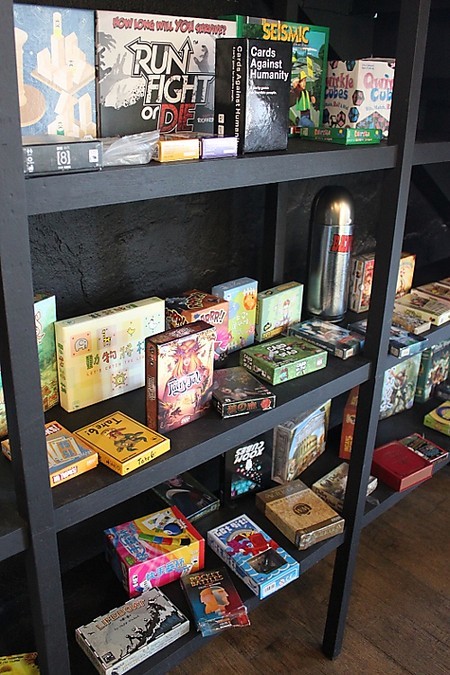 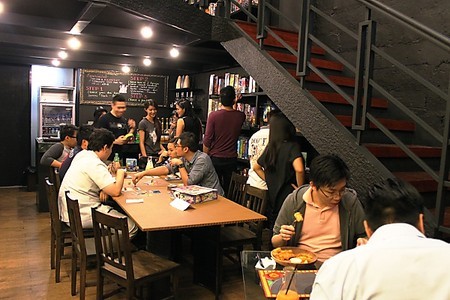 Packed on a Saturday night: they are currently open Wednesdays to Sundays, with weekends seeing the most number of guests (call to reserve a table) 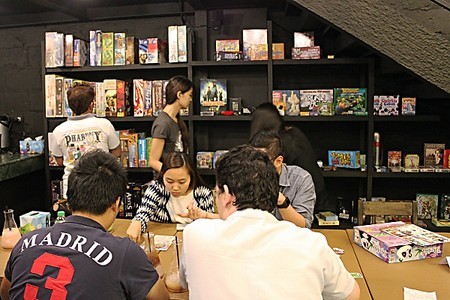 Game instructions confusing you? Don't worry, ask help from their in-store game master to guide you through the mechanics

The owners of Dyce N Dyne wanted their bar-cafe to stand out. To add artistic decor into their establishment, the noted biker jewelry craftsmen of 13 Lucky Monkey (www.13luckymonkey.com) lend their trademark gritty, rock and roll sensibilities to produce really and soon to be iconic pieces; the Filipino duo transformed the spot into a steampunk themed boardgame cafe. The difference in ambience is evident from day to night, when their store signage outside is lit up and pieces of it move around, ceiling lights encased in recycled bottles glow, and the Didi, their steampunk squid mascot, lights up her eyes to greet guests climbing up and down the stairway. 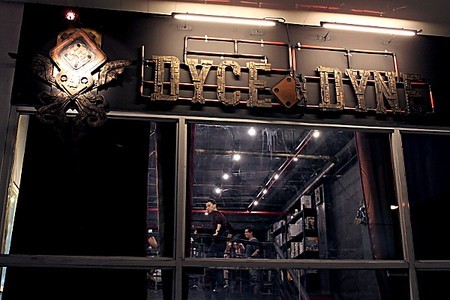 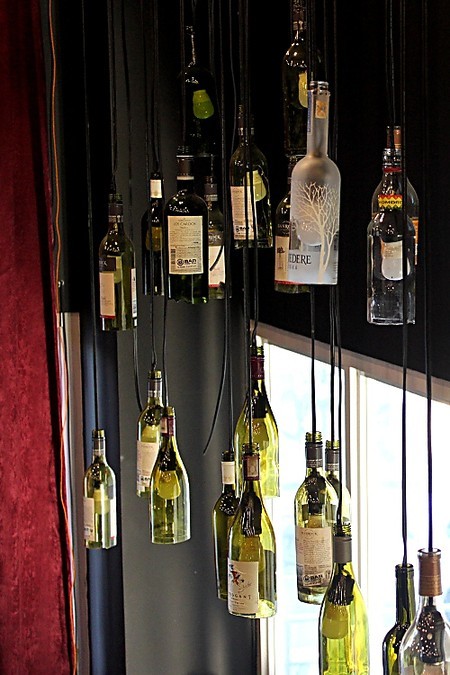 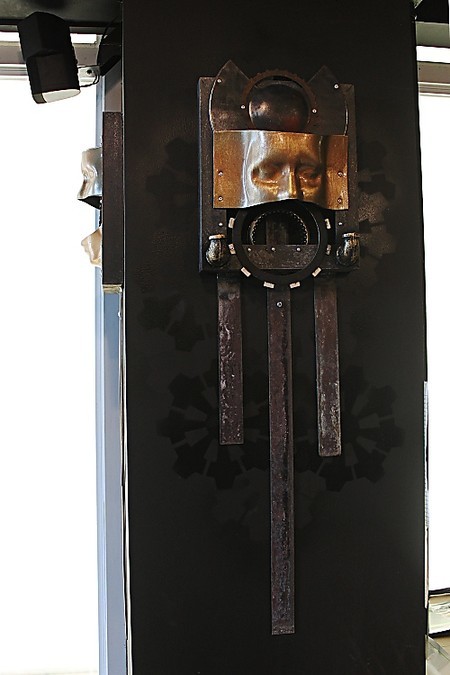 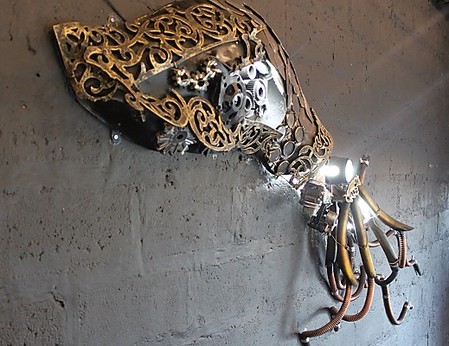 Providing thirsty gamers with perk-me-up beverages is Chemistea milk tea + cafe, offering an extensive line of Asian signature milk teas, Milk teas, Espresso concoctions, Fruitea formulas and Cocoa emulsions. To match their chemistry themed drinks, beakers and flasks are used instead of mugs and glasses, making you feel like a 'scienteast.' You can choose among many of their Particles to top your beverage — there's pearls, nata, egg pudding, espresso shot, milo dust, cheese froth, yogurt popping bpba, coffee jelly, and other syrups and sauces. Local beer and alcohol is also available on the menu. 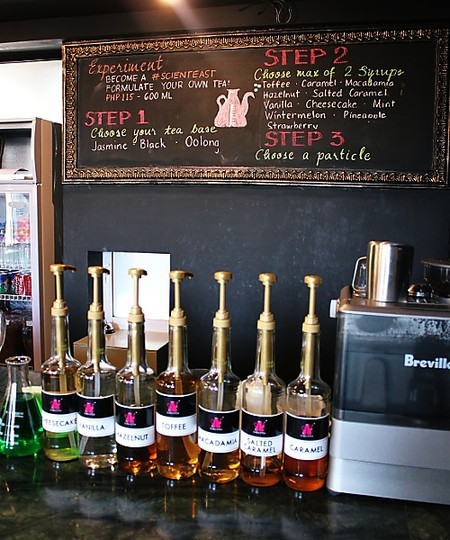 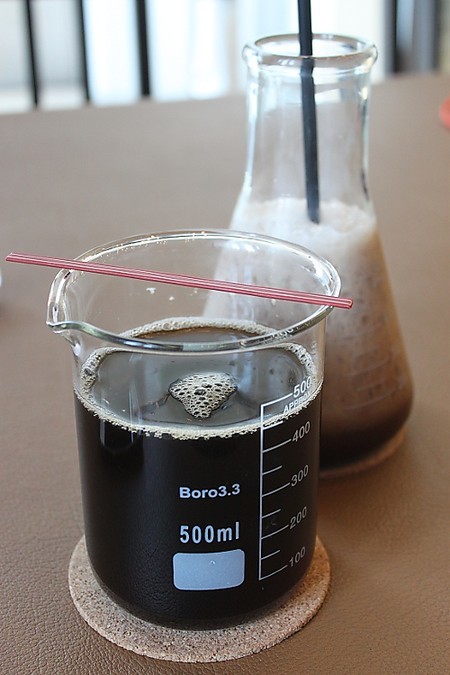 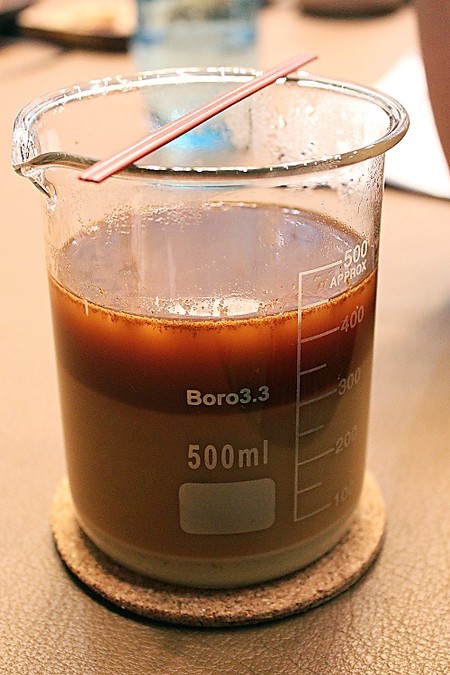 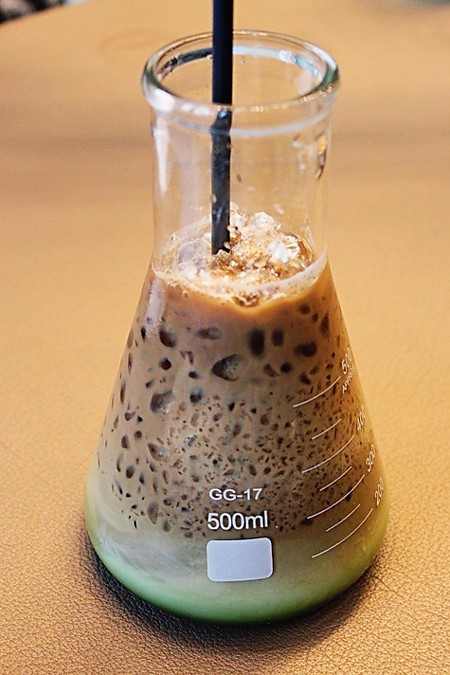 All of the food at Dyce N Dyne, from appetizers to mains, are named after board games that customers can play in the restaurant. What I appreciate about their food selection is that they are unfussy but flavorful, easy to share with your companions and easy to eat while you are busy playing. Most of dishes we tried had lots of crisp and crunch, textures that are always appealing on the palate especially when you're on party game mode.

Their soft opening menu currently has one salad listed, the Halli Galli Apple Salad (P180), and it's the healthiest option if you want to have more greens than deep-fried treats, a wooden bowl with greens, green apples, carrots, and drizzled with apple vinaigrette. For party-time appropriate food, snack on Nachos Against Humanity (P250),  a classic meaty and cheesy, crunchy nacho mess that gets some heat from jalapeno. Don't forget to wipe your hands when its your turn to play! 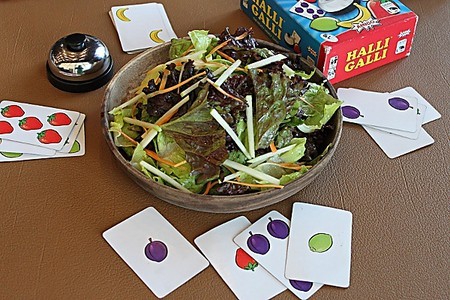 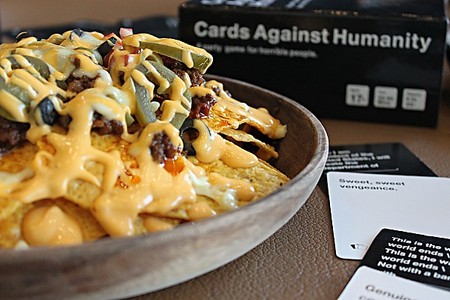 More crispy and crunchy starters can be had with Chicken Skin of Avalon (P150) served with a generous portion of potato chips; each crisp and juicy piece of battered chicken skin was delicious soaked in spicy vinegar. Extra devilish is their bacon in steroids called the Bora Bora Bacon Tempura (P330). Crispy bacon strips are already surefire crowd pleasers, but what happens when you want to deep fry them tempura-stye? Crazy yummy indulgence. 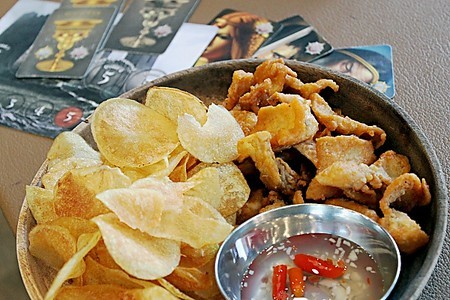 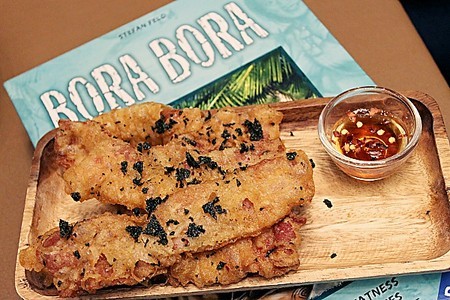 All of Dyce N Dyne's rice meals are affordable, costing less than P200 each. For something a little different in your silog, try the Zombicide Tempura Sardines (P150) which makes Spanish sardines crunchy with tempura batter. They also offer Rarrr Gising Gising (P180) , a pretty straightforward and spicy take on the popular veggie dish laced with coconut milk. 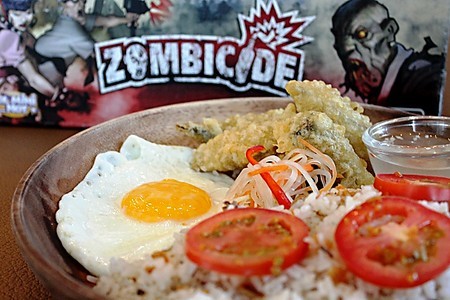 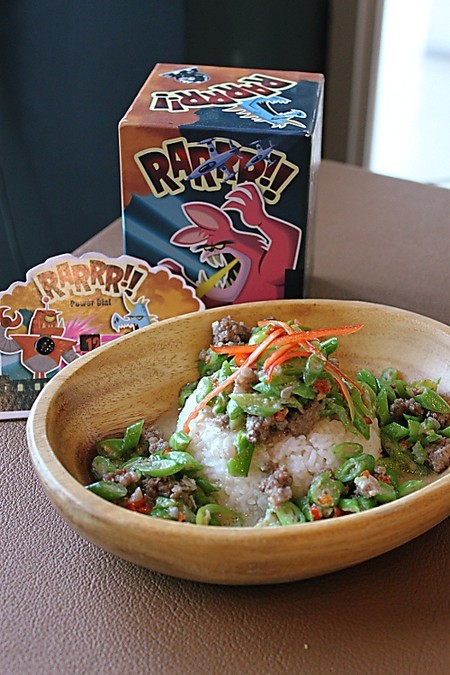 If you prefer holding your food with your hands rather than deal with utensils while playing boardgames, the restaurant has two sandwiches to choose from: Legendary Grilled Cheese (P150) perfectly crisp outside and gooey on the inside (served with more potato chips!), and a trio of Munchkin Sliders (P250), three mini burgers stuffed with things you love about breakfast, it might as well be a breakfast burger. And yes, it also comes with potato chips, for more munching fun while you wait for your turn to play. 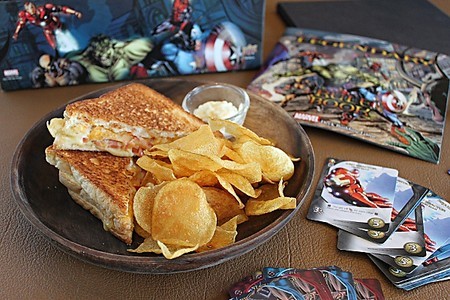 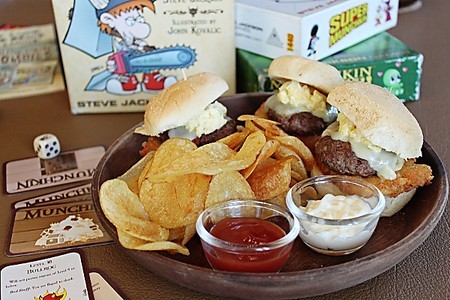 Dyce N Dyne is located at Unit #3 ground floor of Rosemarie at Elements building, Pasig Boulevard, Pasig (across Seaoil gas station). Currently on soft operation, Dyce N Dyne is open Wednesdays to Sundays, 12pm to 12am. Like them on Facebook (/dycendyne) and follow on Instagram and Twitter (@dycendyne). 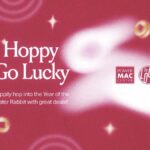 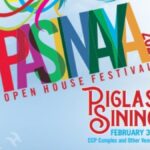