Here's what you need to know about the 6-day event kicking off this March 16!

It has been a hundred years since our people started capturing in film the stories of their lands and its people – stories that had shaped the country to become what it is today. And to mark the centennial year of Philippine cinemas, four Filipino filmmakers – Jewel Maranan, Baby Ruth Villarama, Kara Magsanoc-Alikpala, and Coreen Jimenez – established Daang Dokyu, a documentary film festival which celebrates the documentaries of then and now. 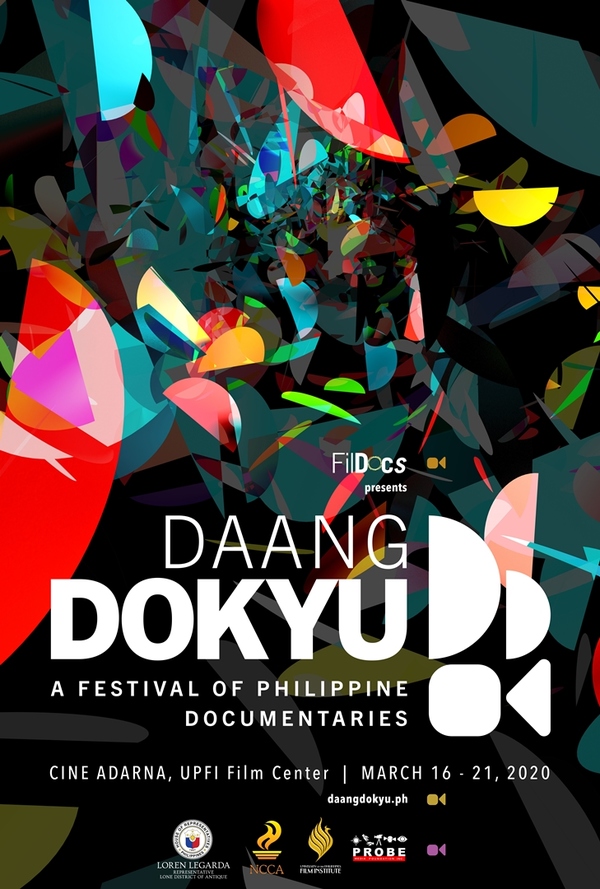 Daang Dokyu is the first of its kind in the Philippines and is set to present both classic and contemporary titles from different countries and regions, all of which tell the story of the nation. Through this, the festival aims to reach a broader audience and to present in "the docu way" how we are as a nation throughout the years.

Ahead of its launch this March, here are 5 things to know about this film festival:

The festival is set to run from March 16 to March 21 at Cine Adarna, UP Diliman. Each day of the festival will feature a different selection of films that are of different themes. Tickets for the film screenings are priced at P100, while the talks that will be happening throughout the festival are free.

Opening the festival is Alyx Ayn Arumpac's Aswang, a film which was screened at the International Documentary Film Festival Amsterdam (IDFA) in the Netherlands. It tells the story of the people whose lives are caught in the growing violence of President Duterte's war on drugs.

The film will then close with a collection of the oldest short documentaries about the Philippines, stored in the British Film Institute and the US Library of Congress. This includes Fabrication Des Chapeaux De Manille and Industrie De L’abaca A L’ile De Cebu (1911) Manila Street Scene (1926), and Glimpses of the Culion Leper Colony and of Culion Life (1929),

3. The festival will screen 55 films, classified into 5 different themes.

Curated by Sari Dalena, Teddy Co, and Jaja Arumpac, 55 films will be screened all throughout the 6-day film festival. These are divided into 5 different sections, each with a different theme and subject matter.

The first day will focus on the themes of Ecology and the environment, and how the Philippines is in a vulnerable position as the planet faces a climate and ecological crisis. The second day is all about the Nation, looking at the country's environment of fake news. This section asks the difference between what is true and what is propaganda, as well as how media and education are used to gain more power.

Day 3 is about Taboos on religion, politics, and the human body. The documentaries screening on this day will discuss subjects that are usually not talked about, starting a dialogue on public conversations on things like identity and mental health.

The fourth day will give the audience a look at the country's different Regions. The session will screen works made in different regions, showing how the differences one has from the other make up the identity of the Filipino nation. Lastly, there's Future, which presents works about the direction and what's in store for the documentarists and the documentary film industry in the country.

Five documentary films are set to make their premiere in the country during the Daang Dokyu film festival. This includes A Rustling of Leaves: Inside the Philippine Revolution, a film about the left-wing revolution in the Philippines; A House in Pieces, which is about the aftermath of the 2017 war in Marawi; Dreaming in the Red Light, a film about a former sex worker and her daughter; Ang Pagpapakalma sa Uno (To Calm the Pig Inside), a documentary on the effect of supertyphoon Yolanda in the country; and The Nightcrawlers, which shows President Duterte's drug war in the eyes of the vigilantes and the photojournalists covering the deaths.

5. Talks will also be held during the week-long event.

Aside from screening the films during the festival, talks, roundtables, and masterclasses featuring some of the industry's most renowned documentarists. These events are open to students, enthusiasts, educators, and the members of the documentary community who want to know more about how the industry works.

Admission for these talks is free.

Daang Dokyu will be happening from March 16 to 21 at the Cine Adarna, UP Diliman. For more information, you may keep checking back on their official website, Facebook, and Instagram pages.