Get trained by Nike’s running clinics and run with the rest of the world for a cause.

For the second year in a row, Nike will allow Filipino runners to run with the rest of the world with the 2009 Nike+ Human Race 10k. Set this coming October 24, 2009, Filipino runners can run simultaneously with the rest of the world for one day and celebrate their love for the sport. The 2009 race is set to be bigger and better as Nike partners with the annual Subic International Marathon. 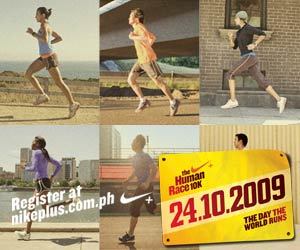 Run for a Cause

This year’s run is elevated to a greater cause as it partners with Gawad Kalinga’s ‘Walang Iwanan’ program that will provide relief and clean-up work for the nine GK sites ravaged by typhoon Ketsana. Nike Philippines will be donating 10 PHP for every kilometer ran by a Nike+ Sportband user who joins the Nike+ Human Race Ambassadors Challenge at NikeRunning.com. On October 24, every finisher of the Nike+ Human Race 10K in the Subic International Marathon will automatically convert their run to a PHP 100 donation.

“By bringing the 2009 Nike+ Human Race 10k, we provide a venue for Filipino runners to pit themselves against runners from all over the globe and, at the same time, run for a greater cause by making every kilometer count for the victims of typhoon Ketsana,” says Mae Dichupa, Nike Philippines Marketing Manager. “Running is a sport that brings about a lot of health benefits. Through Nike’s partnership with Gawad Kalinga, we add another benefit to running by making every run meaningful, uniting every Filipino runner to do their share as the nation continues to rebuild itself after the calamity” adds Dichupa.

Globally, Nike is hosting runs in more than 30 cities around the globe, making it the world’s biggest run. However, with the innovation of NikePlus.com and the Nike+ Sportband, every pavement can become a race course on October 24 as runners who won’t be able to make it physically to the actual course can still participate by logging their run, making the Nike+ Human Race open to anyone, anywhere.

A physical Nike+ Human Race will be staged on October 24 at 4PM as Nike sponsors the 10K leg of the Subic International Marathon. Successful finishers will be given the Nike Finisher’s Band to certify their accomplishment of running with the world. For the details of the registration through Smart Communications, visit www.subicinternationalmarathon.com/sim09/.

In preparation for the world’s biggest run, Nike rolled out a series of running clinics, headed by veteran running coach Rio dela Cruz, in universities and key running areas around the metro for both beginner and seasoned runners. Coach Rio taught participants the proper way of running, monitor their progress, and give expert advice to help runners maximize their potential in time for the October 24, 2009 Nike+ Human Race 10K.

For those who missed out on the earlier schedule, another set of training clinics is set on October 20 and 23 at the Nike Park, Bonifacio High Street.