PETA, The Red Whistle and Love Yourself Inc. Team Up for HIV Advocacy

The campaign reaches out to audiences through an immersive experience that promotes treatment and awareness on HIV, debunks myths and misconceptions about the disease, and pushes to eradicate stigma around Persons Living With HIV.

The Philippine Educational Theater Association (PETA) draws its 52nd Theater Season to a close by responding to an issue that has long been met with silence: the HIV epidemic in the Philippines. Together with esteemed HIV advocacy organizations The Red Whistle and LoveYourself, Inc., PETA launches the Acting on HIV campaign with Rody Vera’s anthology drama Under My Skin, directed by Melvin Lee, as the frontliner. 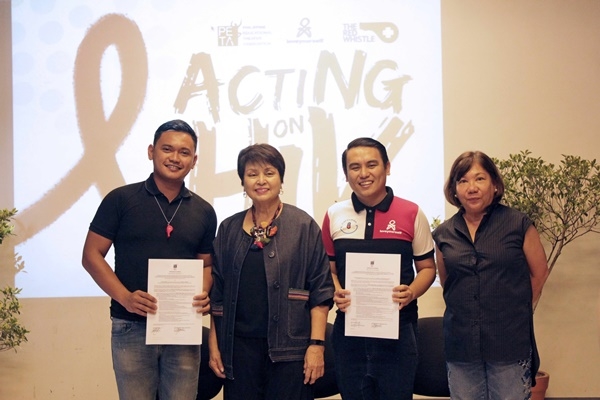 The Acting on HIV campaign reaches out to audiences through an immersive experience that promotes treatment and awareness on HIV, debunks myths and misconceptions about the disease, and pushes to eradicate stigma around Persons Living With HIV (PLHIV) through workshops, exhibits, an online EduSeries, and talkbacks with HIV experts back-to-back with every show of Under My Skin. PETA now also becomes part of LoveYourself, Inc.’s annual Mass HIV Screening event and The Red Whistle’s annual Project Headshot Clinic in November this year. PETA Executive Director Beng Santos-Cabangon says that it is through this campaign and partnership that various groups can unite and strengthen their cause. “PETA believes that by using the arts as a medium, Under My Skin and other advocacy-oriented activities can become an effective platform for probing, conversations, and a coming-together of various HIV experts and advocates,” says Santos-Cabangon. “It is through this safe space that we aim to humanize the HIV issue that has long become taboo in our society.”

As the cases of HIV rise in the country, PETA and its partners now use the stage as a platform to advance the HIV advocacy and tap into larger networks. PETA Artistic Director Maribel Legarda says that partnering up with LoveYourself, Inc. and The Red Whistle is in line with keeping PETA’s commitment to take an active role in using the arts for education and advocacy. “In the past, PETA has been successful in tackling sensitive topics through theater. Since the early 2000’s, PETA has been active in mobilizing and forging strategic partnerships to help further advocacy work,” says Legarda. “We believe that theater can be another approach to HIV awareness, be an effective means of public engagement, introspection, and action.”

While The Red Whistle and LoveYourself, Inc. both employ their own particular approaches to the HIV issue, the Acting on HIV campaign gives the opportunity to collaborate. LoveYourself, Inc.’s response to the HIV epidemic has always entailed a holistic approach that covers education, prevention, testing, and treatment. “The arts can act as a bridge for people in the midst of crisis,” says LoveYourself, Inc. founder and executive director Ronivin Pagtakhan. “The country has been testing approximately 35 individuals with an HIV infection per day, and this number gives us two related perspectives: The cases are rising and we are reaching more people to get tested and initiate their treatment. These situations call for more awareness. The arts, particularly theater, can come into play.” According to Pagtakhan, “It’s been part of our people's discussions, and we should take advantage of it as a bridge to the HIV advocacy, and enable people to act on it.”

In similar fashion, The Red Whistle responds to the HIV epidemic by addressing the need for a change in mindset. “Theater has the ability to move people to understand the issue more. We need to shift perspectives around HIV-related stigma and change attitudes towards our sexual health,” says The Red Whistle president Benedict Bernabe. “If we want to change people’s minds, we need to tug on their heartstrings first. This is why the arts is an important and necessary component, not just for awareness and education, but also for behavior change in the HIV advocacy.”

Acting on HIV’s frontliner, Under My Skin, will feature artists and HIV advocates such as Cherry Pie Picache, Roselyn Perez, Miguel Almendras, Mike Liwag, Anthony Falcon, and more. With the play and the rest of the activities brought by the campaign, PETA, The Red Whistle, and LoveYourself, Inc. hope to reach out to more PLHIV, recruit more advocates, and promote treatment and testing among Filipinos. PETA, The Red Whistle, and LoveYourself, Inc. stress that science and medicine prove that there is indeed a way to manage the disease. The true culprit of the worsening cases of HIV in the Philippines, then, is not the virus itself, but the lack of education and the stigma revolving around the issue.

The Acting on HIV campaign launches this October 2019 leading up to PETA’s 52nd Theater Season finale, Under My Skin from February 7 to March 15, 2020 (Fridays at 8:00pm, Saturdays/Sundays at 3:00pm and 8:00pm) at the PETA Theater Center, #5 Eymard Drive, Brgy. Kristong Hari, New Manila, Quezon City. For tickets and showbuying inquiries, please contact PETA at petatheater@gmail.com / 725-6244, or TicketWorld at www.ticketworld.com.ph / 891-9999.