The Search For The Next Cobra Pinoy Heroes Is On

Cobra Energy Drink announces the return of Cobra Pinoy Heroes, where they search for Filipinos who exemplify hero-like qualities through their own little ways.

There is always hope in the face of hindrances, and heroes in the face of hardship. That’s why this 2013, Cobra Energy Drink announces the return of Cobra Pinoy Heroes, where they search for Filipinos who exemplify hero-like qualities through their own little ways. This story-telling project aims to recognize Filipinos from all walks of life that have contributed to nation building, no matter how big or small the deed is. 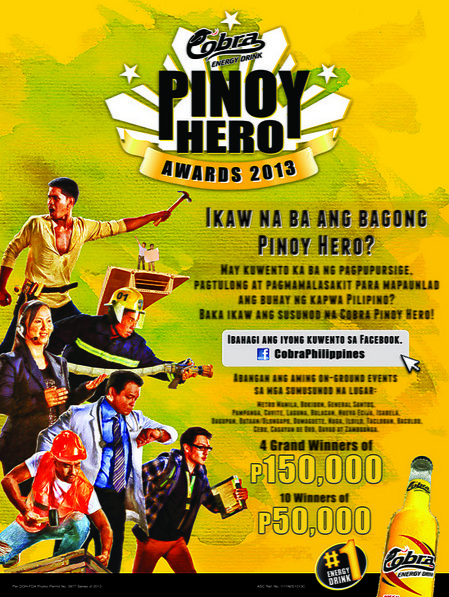 A bigger and better Pinoy Heroes Awards is what Cobra has prepared this year, with prizes of up to P150,000 for the most inspiring and compelling story. There are four categories, namely, Youth, which is heroism by 18- to 23-year-old Filipinos; Work Force for employed Filipinos who are 18 years and above; Service for men and women in uniform from NGOs or in government service; and lastly, the Modern Day Hero for males and females who have done an act of bravery, courage, and selflessness in an everyday setting beyond what is expected of them. There will be one winner per category, and other special awards will receive P50,000 each.

Cobra Energy Drink launched this project for its second consecutive year because it believes that these small acts of heroism are a good start to building a better and progressive nation. This ideology supports its latest tagline, Lakas ng Pinas, where Cobra acknowledges that every Filipino’s action, whether big or small, plays a role in the betterment of the country,

“We want to give credit and value to whom they are due. Every day, we encounter Filipino heroes who have shown acts of bravery, strength, and selflessness for the other people they serve. This is a venue for the unnamed to be recognized for going above and beyond the call of duty, and for the rest of us to be inspired to be better, to be heroes in our own way,” says Jef Mendoza, Cobra Energy Drink Brand Manager.

“Cobra has been the partner in life of many unsung Filipino heroes. We learned that our brand has served as an icon of inspiration to a lot of Filipinos to serve better, harder, everyday. This is why Cobra Pinoy Heroes was launched, for the whole nation to see that every Filipino’s passion and hard work will not go unnoticed,” ends Mendoza.