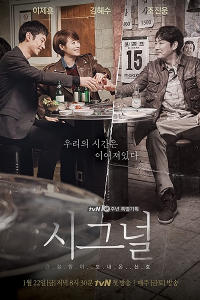 A criminal profiler Park Hae Young (Lee Je-hoon), solves a kidnapping case that ended up with a falsely accused who apparently disappeared after the crime, with a mysterious walkie-talkie he picks up. The success of this case triggers the formation of a long-term cold case team, led by Detective Cha Soo-Hyun (Kim Hye-soo), who has been searching her long-lost mentor Lee Jae-Han (Cho Jin-woong), for the past fifteen years. With the help of Detective Lee Jae-Han, the person at the other end of the walkie-talkie, Park Hae-young solvesother cold cases that have remained unsolved for years, while helping Lee Jae-Han help solve some cases in the past. Grave unintended sequences follow.

[About:]
Signal is a 2016 South Korean fantasy police procedural television series starring Lee Je-hoon, Kim Hye-soo and Cho Jin-woong. It premiered on tvN on January 22, 2016. A total of 16 episodes aired on Fridays and Saturdays at 20:30 KST, with the final episode airing on March 12, 2016. The series was inspired by real-life criminal incidents in Korea, including the Hwaseong serial murders.

The series received widespread acclaim from audience and critics alike for its story and performances. It is also the tenth highest-rated Korean drama in cable television history with a peak audience viewership of 12.54%.