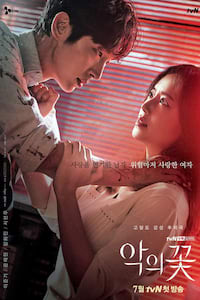 Mystery, Romance, Thriller
Be the first to rate this

Baek Hee Sung (Lee Joon Gi) is a man who hides his identity and past from his wife Cha Ji Won (Moon Chae Won), a detective. On the surface, they appear to be the perfect family: a loving couple with a beautiful daughter who adores her parents. Cha Ji Won and her colleagues begin investigating a series of unexplained murders and is confronted with the reality that her seemingly perfect husband may be hiding something from her.

[About:]
Flower of Evil is a South Korean television series starring Lee Joon-gi, Moon Chae-won, Jang Hee-jin, and Seo Hyun-woo. It aired on tvN every Wednesday and Thursday from July 29 to September 23, 2020, and streamed internationally on iQIYI, Viki and ViuTV with multi-languages subtitles. Lee and Moon have previously starred in Criminal Minds, and it was Lee's return to television after two years.